Monoclonal anti-body cancer therapy is one of the most suitable therapeutic approach for hematologic malignancies and solid tumours for the past several years. This therapy of monoclonal anti-body join target cell, increase immune system, kills affected cells and slows tumour growth in patient. It is a laboratory produce mixture of homogenous anti-body molecules with empathy towards a particular antigen being generated by using a hybridoma by combining a B-cell with a single lineage of cells containing a specific antibody gene. A host of similar cells are produced that secrete the same anti-body. Owing to its specificity and high reproducibility, MAbs are more advantageous over polyclonal antibodies. MAbs are more often used in variety of applications like, research and diagnosis, therapeutic tools in cancer and immunological disorder, pharmacy, etc, as such are in huge demand in industry. Due to its high specificity, MAbs are increasingly used for basic immunological and molecular research and have proven desirability. They are used in human therapy, cancer therapy, diagnosis of disease, commercial protein purification, suppressing immune response, hormone test, diagnosis of allergy, structure of cell membrane, purification of complex mixtures, identification of specialized cells, preparation of vaccines, increasing the effectiveness of medical substances (Edward, 1981).

MAbs are used in applications against cancer cell-specific antigens which include an immunological response against targeted cancer cells. Availability of MAbs which recognizes immune cells antigen has resulted in improved diagnosis for lymphoma and leukemia. They are also being used in diagnosis of solid tumour especially for carcinoma of lungs, colon, and rectum. They are also useful in examining blood, sputum, biopsy samples of cancer cells or for materials discharged by cancer cells. At present MAbs are available for variety of cancers like ovarian, colorectal, lungs, etc (Beckman et al, 2007). MAbs interceded immunotherapy employs cells having cytotoxicity like monocytes and macrophages through antibody dependent cell cytotoxicity. MAbs binds complement proteins in cancer therapy which leads to direct cell toxicity that is complement dependent cytotoxicity (Carter, 2001). MAbs stops growth of tumour cells by blocking growth factors thus arresting the spread of tumour cells.

MAbs not only detect cancer cells but also destroys them and clinical trials have revealed that MAbs stimulate partial reduction. Conjugate MAbs are combined with drugs and toxins and radioactive atoms are applied as delivery vehicles to take these substances through the body. MAbs flows in the body until it finds cancer cells with a matching antigen and delivers toxic substance to the place of the body. In chemotherapy, MAbs conjugate with chemotherapeutic drugs known as chemo labelled antibodies. The delivered drug causes damage to tumour and normal tissues.

Clinical applicability of MAbs is because of its specificity and homogeneity. Another special feature of hybridoma production is that mixture of antigens can be used to produce specific antibodies. The treatment of cancer by MAbs has got highly advanced and its scope as therapeutic agent for untraced cancer has broadened.

The production of MAbs by hybridoma technol­ogy was first discovered by German scientist, Georges Kohler and Cesar Milstein of Argentina. In 1976 they developed a technique involving fusion of a cancerous (immortal) mouse B-Cell myeloma with an immunized mouse plasma cell by creating a hybrid cell/hybridoma (Blaine, 2012). The hybrid cells are clones of anti­body producing cells against desired antigen and spread rapidly to generate large amounts of antibody. Hybridoma is capable of rapid circulation and high antibody exuding rates as in myeloma cells, and can maintain antibody genes of mouse spleen cells (figure 1.1). 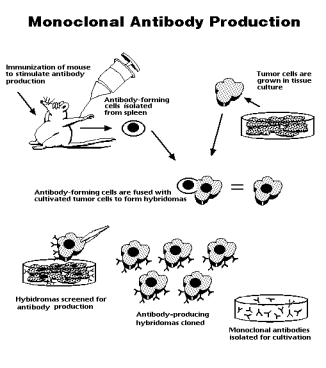 2.1.1 Outline of production of MAbs

The basic approach for production of MAbs includes, viz., purification and characterization of the desired antigen in sufficient quantity, immunization of mice with purified antigen, culture of myeloma cells which are unable to synthesize hypoxanthine-gua­nine-phosphoribosyl transferase (HGPRT) enzyme necessary for the salvage pathway of nucleic acids, exclusion of spleen cells from mice and its fusion with the myeloma cells, and following fusion growth of hybridomas in hypoxanthine aminop­terin thymidine (HAT) medium where only the fused cells have the ability to grow. Because of lack of HGPRT, unfused myeloma cell has no ability to grow in this HAT medium, and as such cannot produce DNA. Because of short life spans unfused spleen cells can­not grow, only fused hybrid cells/hybridomas can grow in HAT medium. Since spleen cell partners produce HGPRT, Hybrid cells have the ability to grow in the HAT medium. Hybrid cells clones are produced from single host cells and the antibodies exuded by the differ­ent clones are then tested for their capability to combine to the antigen using an enzyme-linked immunosorbent assay (ELISA). And finally then the clone is selected for further use (Zola, 2010).

The various types of anti-cancer monoclonal antibodies are:

Naked MAbs are antibodies that work for themselves and there is no drug or radioactive material connected to them. For cancer treatment, these are the most common type of MAbs. A large number of naked MAbs are attached to antigens on cancer cells but a few of them performs either by joining antigens to the non-cancerous cells or to the free-floating proteins. Naked MAbs works in a diverse manner as elaborated below:

Conjugated MAbs are antibodies where MAbs are combined to other substance like chemotherapy drug, different type of toxin, or a radioactive particle. Here MAbs are used for taking these substances directly to the cancer cells and mingles in the body until it finds the targeted antigen and delivers the toxic substance at the required place thereby reducing or somewhat eliminating the chance of causing damage to normal cells in other parts of the body. These are also called as tagged, labelled, or loaded antibodies. They are divided into a variety of groups, as given below:

MAbs apply their antitumor effects by various types of means of action:

MAbs targeting Ccncer requires to attach to appropriate tumour cell surface antigens with adequate quantities and lead to destruction of targeted cells (Ignacio Met al, 2007). Mode of action include tumour cell toxicity via antibody-conjugate, modulation of host immune system (such as ADCC/CDC), and blockade of ligand combining and signalling perturbation.

2.4 Side effects and limitation of monoclonal antibodies

MAbs generally have small side effects unlike chemotherapy. Only a mild aller­gic reaction or rashes may occur with first admin­istration of the drug. Other common side-effects are fever, headache, weakness, chills, nausea with vom­iting, and low blood pressure (Chames p et al, 2009). Whereas grave side-effects are infusion reaction, low blood cells count, heart problem, skin problem and bleeding. Else other side effects of MAbs are with the targeted antigens.

Cetuximab which is used against lungs cancer and head and neck cancer can result in severe infusion reaction and can cause serious rashes.

Rituximab which is used against leukemia andlymphoma can cause renal toxicity and serum sickness.

A serious limitation is that MAbs drugs are most costly as there are only a few FDA regulated drugs which are available in the market. A good number of new MAb drugs are still under development process. Since generic competitors are not there, the sale of cost-effective MAbs is quite good. MAbs are most commercialized and marketed products. Due to huge cost, MAbs therapies are a financial burden on patients. With only proper health planning and step-wise periodic therapies the problem can be sorted. MAbs is a proven therapeutic agent and as acted as mulching cow for the pharma­ceutical industry. The typical doses of MAb drugs needed for treatment are significantly higher than those required for other drugs. Thus, large-scale production that is cost-effective in man­ufacturing processes is required.

However, the huge demand to increase production of these drugs and the drive to lower the cost of these expensive medicines is a continuous challenge to the present industry. This will further improve the efficiency of manufacturing processes. These challenges are overcome by streamlining downstream processes to increase product quantities, to implement proper quality with high-concentration product formulations with sufficient stability, dose-effective products, to reduce the cost, to develop methodologies for time­line MAb production, and to develop alternative delivery systems (Rohrer T et al, 2009).

The treatment of monoclonal antibody depends upon the type of cancer and drug you are receiving. Some of the drugs are used in combination with others treatment like chemotherapy and hormone therapy.

The development of monoclonal antibodies to has provided considerable research of interest. There are monoclonal antibodies which are directed against B cells, natural killer cells, granulocytes, monocytes and platelets. Abs which reacts with different antigens is available which have definite mechanism of action (Khemshead et al, 1983).

Several antibodies hare available which react with progenitor cells and these have been used as an aid in the diagnosis of different leukaemias. Neuroblastoma and lymphoma cells may have the appearance of small round cell tumours and be indistinguishable morphologically. MAb react predominantly with these tumour types and used for such diagnostic distinction. Antibodies reacting against tumours when it is coupled with radio label may be used for radioisotope scanning and small metastasis may be visualised using this. MAbs are being used in clinical evaluations and promise to provide a new generation of targeting agent.