Carnation is commercially one of the most important cut-flower crops worldwide. Carnation mottle virus (CarMV) is the type member of the genus Carmovirus of Tobamovirideae family. It can be mechanically transmitted and causes significant losses including poor quality of cut-flowers and fewer yields on carnation crops. In an attempt to surveying the CarMV heterogeneity, 120 CarMV isolates were collected from carnation cultivation greenhouses in central (Mahallat, Pakdasht) and northern (Sari) parts of Iran. Presence of virus was verified in 72% of the collected samples as serologically tested by DAS-ELISA method using polyclonal antibody. Biological properties were studied through mechanical inoculation of extracted sap of CarMV infected leaves onto the leaves of some test plants. Mosaic symptoms were appeared on the leaves of those named indicator plants followed by chlorotic lesions on the leaves of C. quina. Coat protein gene of representative isolates was amplified by RT-PCR method and sequenced by specific primers. Multiple sequence alignment showed 100 % identity between CP gene nucleotide sequences of CarMV isolates belong to the central parts. However, northern isolate had two amino acid substitution and 98.6 % identity to the central parts isolates. Coat protein gene sequence comparison of these isolates to some other isolates available from GenBank and resulting phylogenetic tree indicated that Iranian isolates showed close relationship to Spain nl-2 and Netherland isolates and the most distance to Italy isolate.

Carnation (Dianthus caryophyllus L.) has been cultivated for over 2,000 years in Asia and Europe. It is currently one of the most commercially important cut-flower crops in Europe, America, Japan, Australia and Israel (Lisa V., 1995). Because of the vast lands with very varied climatic conditions, Iran is one of the largest producers of ornamental flowers and ranks 17th worldwide in terms of total area under cultivation of decorative flowers. Carnation is economically one of the most important cut-flower crops in Iran with annual production rate of 157 millions flowers. Tehran and Markazi (Mahallat) provinces in central parts of Iran are the main carnation cut-flower production areas with overall production rate of 98%. Nevertheless, other regions especially northern Iran is increasingly improving carnation cultivation (Raadmehr A., 2011). Carnation is affected by several viruses which can often cause severe losses in some cases. They are including Carnation mottle virus (CarMV), Carnation etched ring virus (CERV), Carnation necrotic fleck virus (CNFV), Carnation ring spot virus (CRSV), Carnation vein mottle virus (CVMV) and Carnation latent virus (CLV) (Lisa V., 1995; Lovisolo and Lisa 1978; Hollings and Stone 1964). CarMV is the type member of the genus Carmovirus of the family Tombusviridae (Hollings and Stone 1977). Typical strains of the virus induce mild mottling in the young leaves and faint chlorosis in mature leaves of carnations (Dianthus caryophyllus) and pinks (Dianthus barbatus). In some carnation cultivars, the quality and quantity of cut flowers is reduced and virus induces vein clearing and curling of leaves and flower breaking (Calderon & Arbelaez, 1999). The leaves of some infected plants develop yellow mottling, yellow ring spot and a general mosaic (Chen et al., 2003). Viral genome is a positive sense ssRNA of approximately 4 kb in size (Canizares et al., 2001). It contains four open reading frames (ORFs) which code for replication-associated proteins (ORF1 and ORF1-RT), movement proteins (ORF2 and ORF3), and the coat protein (ORF4). Also, two subgenomic RNAs (sg RNA) of 1.5 and 1.7 kb, coterminal with the 3′-genomic end, are produced during the Carmovirus infection cycle. CarMV can be mechanically transmitted during propagation and cropping procedures and natural spread of virus has not been recorded (Kowalska 1972; Hollings and Stone 1964). Presence of CarMV and its coat protein gene sequence were studied on carnation cultivars mainly collected from Mahallat greenhouses. But, no comprehensive study was made on CarMV isolates of Iran. So, in this study presence of CarMV was tested in carnation samples collected from greenhouses in central and northern parts of Iran, and the pathological and molecular properties of a representative isolates was assessed and compared to other known strains of CarMV available in GenBank.

Hundred and twenty samples of carnation (Dianthus caryophyllus L.) plants were collected from commercial greenhouses in Mahallat, Markazi province (40 samples), Pakdasht, Tehran provinces (40 samples) and Sari, Mazandaran province (40 samples) during April 2010 through January 2012. Sample collection was performed randomly from symptomless plants or based on the presence of CarMV-like symptoms including necrotic spots and mosaic on leaves or stunting and less vigorous growth.

Double antibody sandwich enzyme linked immunosorbent assay (DAS-ELISA) was performed as previously described using a commercially available carmovirus IgG and alkaline phosphatase conjugated CarMV IgG (BioReba) (Clark & Adams, 1977). Briefly, polystyrene microtiter plates were coated with 200 µl per well of coating IgG in 50 mM carbonate buffer pH 9.6 with 0.02Ùª sodium azide. The plates were then washed with PBST (10 mM phosphate buffer saline pH 7.2 containing 0.8% NaCl, 0.02% KCl and 0.05% Tween-20). Healthy and CarMV–infected carnation plants were powdered in four volumes (w/v) of 50 mM sodium phosphate buffer pH 7.3 and serially diluted (fivefold dilution) in the same buffer. Aliquots of 100µL of prepared samples were added to each well and the plates were incubated for 2 h at 37 °C with 150 µL per well of alkaline phosphatase-conjugate CarMV IgG diluted in PBST plus 1% bovine serum albumin (BSA), washed again and incubated for 30, 60 and 90 min with ρ-nitrophenyl phosphate (0.7 mg/ml) in 10% diethanolamin pH 9.8. The reactions were read at 405 nm in a microtiter plate reader. ELISA readings were considered positive when the absorbance of sample wells was at least three times greater than the mean absorbance of reading of three healthy controls.

Disease symptoms were started to appear in most test plants one week post-inoculation. No symptoms appeared on Nicotiana clevelandii. Gomphrena globosa showed necrotic symptoms just on the inoculation sites and ELISA test confirmed that G.globosa is not a susceptible host for virus propagation. Cucumis sativus and Lycopersicon esculentum appeared mild mosaic symptoms after two week. Chenopodium amaranticolor, C. quinoa and Medicago sativa showed chlorotic local lesions one week of inoculation which was subsequently turned to necrotic symptoms thereafter. Presence of virus in test plants was verified by ELISA.

Hundred and twenty carnation samples collected from three locations in central and northern parts of Iran with high carnation cut-flower production rates. DAS-ELISA with polyclonal antibody showed that 87 cultivars (72.5 %) are infected with CarMV. Additionally, isolates recovered from northern parts had the most infection rate of 85 % while isolates collected from Pakdash and Mahallat in central parts equally showed infection rates of 66% and 67% respectively.

PCR amplification of CP gene produced a fragment with the same size for all isolates in 1% agarose gel (figure 1). Sequence database searches of acquired sequences using the on-line BLAST tool confirmed these products as the CP gene of 1047 bp in length. The multiple sequence alignment and resulting sequence distances showed that the CP gene nucleotide and deduced amino acid sequence of the isolates collected from central parts of Iran (Mahallat and Pakdasht) was identical (figure 2). However, these isolates had two amino acid substitution including thr/Met and Ser/Ala at positions 125 and 336, respectively relative to northern isolate (Sari-1) and showed 98.6 % identity (figure 3). Two distinct strain groups of CarMV, including PK and AN, were introduced based on the co-variation between amino acids at position 164 and 331, located in the S and P domains, respectively (Canizares et al., 2001). Sequence analysis of Iranian isolates showed the presence of Pro and Lys within the structural domains S and P, respectively, indicating that they belong to the PK group. The phylogenetic tree constructed from multiple sequence alignment of the CP nucleotide sequence of Iranian isolates and some other isolates available from GenBank showed that the isolates collected from central parts of Iran have close relationship to the nl-2 isolate of Spain with 98.5 % sequence identity while northern isolates with 98 % identity to both Netherland isolate and nl-2 isolate of Spain was closely related to Netherland isolate in phylogenetic tree (figure 4). Furthermore, all isolates were distantly clustered with ca3isolate of Italy.

With total under cultivation areas of 50.5 Ha and 157 million annual production, carnation is economically one of the most important cut-flower crops in Iran (Raadmehr A., 2011). Nevertheless, export industry has had no obvious improvements during these years. One of the main reason is low quality of cut-flower due to infection by several viral pathogens specially CarMV. In an attempt to detect CarMV prevalence in different regions of Iran and study of their molecular heterogeneity, 120 isolates were collected from symptomatic or symptomless carnation plants from three different regions of Iran; Mahallat and Pakdasht in central and Sari in northern parts. Study of their biological properties showed that these isolates produced typical symptoms including mottling and chlorotic lesions on standard test plants. ELISA assay with polyclonal antibodies showed high prevalence rate of CarMV in carnation samples collected from northern parts (87 %) while 66% of samples collected from Pakdash and 67% which recovered from Mahallat was infected with CarMV. CP gene nucleotide sequences of the isolates collected from central parts were completely identical whilst showed 98.6 %sequence identity to northern isolates. The northern isolate had 23 nucleotide substitution which just two of them caused amino acid changes including thr/Met and Ser/Ala at positions 125 and 336, respectively. Iranian isolates belong to the PK group based on the presence of Pro and Lys within the structural domains S and P, respectively. In the phylogenetic tree constructed from multiple sequence alignment of the CP gene nucleotide sequence, Iranian isolates were closely clustered with nl-2 isolate of Spain far from ca3 isolate of Italy. Furthermore, northern isolate also showed close relationship to Netherland isolate. 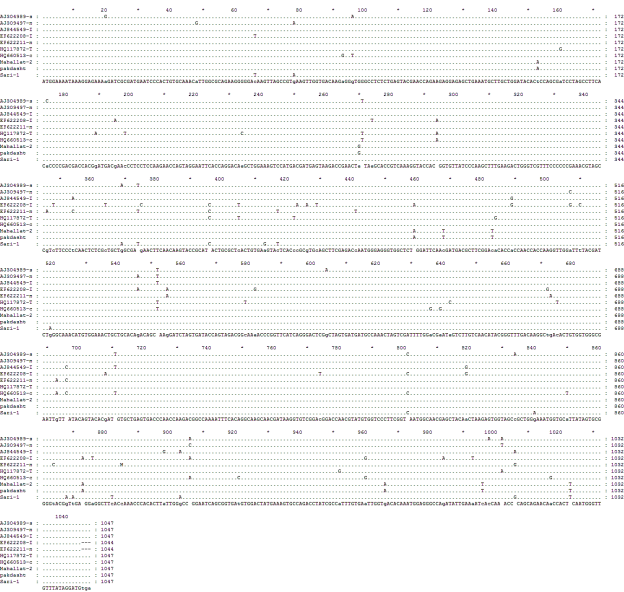 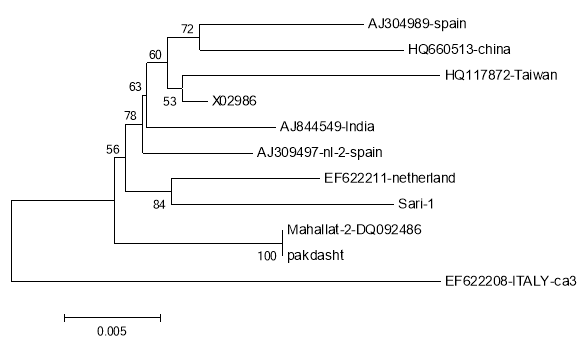