Polysaccharides are the most abundant carbon source in biosphere and support heterotrophic growth in the three domains of life. Their utilization involves hydrolysis of them to generate monosaccharides (Verhees et al., 2003). Glycoside hydrolases and glycosyl transferases are important enzymes which are responsible for the hydrolysis and formation of Haloquadratum walsbyi was described for first time in 1980 by Anthony E Walsby. It was detected by conventional microscopy in samples collected from a salt crust in the surface of a hypersaline pool on the Sinai Peninsula (Bolhuis et al., 2004).

Such cells were commonly found as the dominant cell type in these and other waters including natural salt lakes and saltern crystallizer ponds, and were able to be characterized by 16S rRNA gene PCR and fluorescence in situ hybridization (FISH). But it was not until 2004 that the first isolates were obtained in pure culture by two independent groups: Bolhuis and coworkers from (Australia solar saltern) and Burns and coworkers from (Spanish solar slattern) (Burns et al., 2007). The isolates were preliminary named as “C23 and HBSQ001” (Bolhuis et al., 2004; Burns et al., 2004).

This organism belongs to the group of halophilic archaea that is dominant in NaCl saturated thalassohaline waters around the world. Phylogenetically, the genus belongs to the family Halobacteriaceae. Haloquadratum’s cells are thin, square or rectangular sheets with sharp corners, many measuring 2-5 μm wide but no more Various type of α-glucosidases with different substrate specificity have been found in microorganisms, where they present a very low affinity for polysaccharides and therefore attack starch at a very slow rate (Galichet et al., 1999). These enzymes were widely distributed among aerobic and anaerobic microorganisms, and could be found intracellular, extracellular or as a cell bound enzyme. These proteins have been extensively studied at the biochemical and molecular levels in a number of bacteria, but very little is know in archaea. α-Glucosidases have been described and purified from members of the archaea like Sulfolobus shibatae, Pyrococcus furious, Pyrococcus woesi, and Thermococcus litoralis but only one gene of archaea has been characterized in S. solfataricus. Several members of the halophilic archaea re capable of using alpha linked sugars as carbon sources. However there no reports describing alpha-glucosidases in the halophilic archaea. This study therefore constitutes the first report about the cloning and biochemical characterization of an alpha-glucosidase with high salinity requirement. have been described so far for the extremely

Isolation of the α-glucosidase gene in H. walsbyi

We used bioinformatics tools to analyze the genome of Haloquadratum walsbyi (http://www.genome.jp/kegg/pathway.html) for the presence of α-glucosidase gen sequences. Phylogenetically, this halophilic archaeon is closely related to H. borinquense (Burns et al., 2007) and it is possible that these organisms might share several genes with high homology. Previous studies made in our laboratoty demonstrated that H.

borinquense has the ability to utilize maltose as a sole carbon source. The finding of a gene annotated as a malA in the genome of H. waslbyi was the starting point for the current study. A set of degenerate primers were designed for this ORF and a PCR reaction was performed using H. walsbyi genomic DNA. The putative maltase gene obtained from H. walsbyi using this approach was cloned and expressed in E. coli Rosetta as described below (Yi Cao et al., 2008). The recombinant protein was isolated and partially characterized as described below also (Yi Cao et al., 2008).

The recombinant plasmid (pET-malA) was transformed into E.coli Rosetta™. Transformed E. coli cells were grown in 4L of Luria Bertani Broth (containing 34 μg/ml chloramphenicol and 30 μg/ml kanamycin) at 37°C. After an OD­600 0.6-0.8, 1mM isopropyl-D-thiogalactopyranoside (IPTG) was added to the culture. Following an induction period of 3h, the cells were harvested by centrifugation (4,000 rpm x 20 min, at 4ºC), resuspended in sodium phosphate buffer (NaH­2PO4, pH 8.0; 3M NaCl, 10mM imidazole), and lysed by sonication on ice (100W, 1s of sonication vs. 2s pause, 500 cycles). The cellular extract was centrifugated (13,000rpm, 15min, 4ºC) and the obtained supernatant was loaded into a chromatography column filled with Ni-NTA agarose (Qiagen, Germany), followed by an extensive wash with sodium phosphate and an increased imidazole concentration (≤80mM) to remove… The ï¡-glucosidase containing fractions were detected by SDS-PAGE, 10% polyacrylamide gels, which were stained with Bio-Safe™ Coomasie Stain (BioRad Inc.). Protein concentration was determined using the Pierce BCA Protein Assay (ThermoScientific, Inc), using bovine serum albumin (BSA) as standard.

The α-glucosidase activity was determined by measuring the formation of p-nitrophenol (pNP) from the hydrolysis of p-nitrophenyl α-D-glucopyranoside (PNPG, the typical substrate for α-glucosidase) at 40ºC. It was monitored at 420 nm using a spectrophotometer. The reaction mixture consisted of the substrate prepared at 10mM, and it was added in a reaction buffer consisting of 50mM MES, 3M KCl (pH 6.0). Reactions were initiated by the addition of the enzyme to the reaction mixture and terminated after 30mins by the addition of 500μL 1M Na2CO3.

Effects of salinity, pH and Temperature

In silico analysis of the Haloquadratum walsbyi genome at the Kegg database, (http://www.genome.jp/kegg/pathway.html), revealed an open reading frame potentially coding for a putative alpha glucosidase (Fig. 16). With the use of different databases (Pfam database, Expasy Proteomics Server, PROSITE, Inter Pro Scan, NCBI Conserverd Domains, “DAS –Transmenbranal Predictor Server, TMpred, HMMTOP) and primary annotation, we determined the position of the gene in the chromosome of H. walsbyi, the predicted molecular weight of the coded protein, and its biochemical characterization, which includes the presence of two putative transmembrane helices (Fig. 18). The coordinates of the gene in the chromosome are between 1108309-1105961 and the ORF codifies for a polypeptide of 782 aa (Fig. 17).

The three strains of Haloquadratum walsbyi that were kindly provided by Dr. Mike Dyall-Smith (Martinsried, Germany.) were used to extract their genomic DNA (Fig. 19). To confirm the nature of the strains provided, the genomic DNA extraction was used as template for 16s rDNA amplification by PCR (Fig. 20). 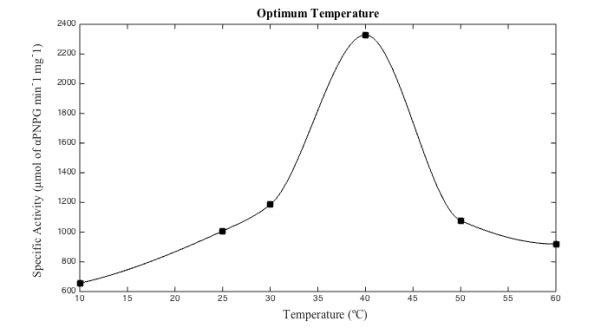 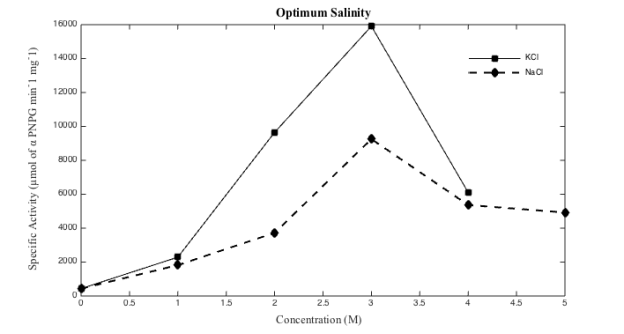 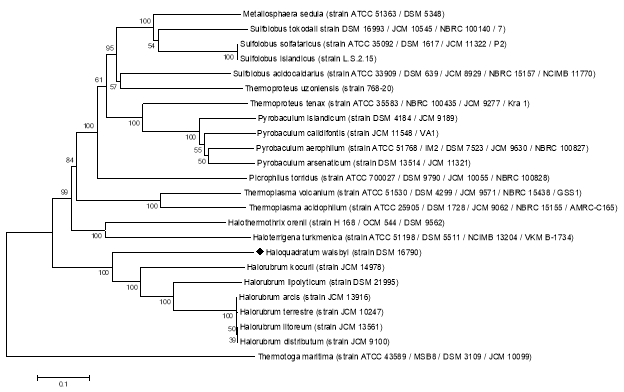 The evolutionary history was inferred using the Neighbor-Joining method [1]. The optimal tree with the sum of branch length = 4.81604479 is shown. The percentage of replicate trees in which the associated taxa clustered together in the bootstrap test (2000 replicates) are shown next to the branches [2]. The tree is drawn to scale, with branch lengths in the same units as those of the evolutionary distances used to infer the phylogenetic tree. The evolutionary distances were computed using the p-distance method [3] and are in the units of the number of amino acid differences per site. The analysis involved 24 amino acid sequences. All positions with less than 100% site coverage were eliminated. That is, fewer than 0% alignment gaps, missing data, and ambiguous bases were allowed at any position. There were a total of 475 positions in the final dataset. Evolutionary analyses were conducted in MEGA6 [4].

Disclaimer: Although utmost care has been taken to ensure the correctness of the caption, the caption text is provided “as is” without any warranty of any kind. Authors advise the user to carefully check the caption prior to its use for any purpose and report any errors or problems to the authors immediately (www.megasoftware.net). In no event shall the authors and their employers be liable for any damages, including but not limited to special, consequential, or other damages. Authors specifically disclaim all other warranties expressed or implied, including but not limited to the determination of suitability of this caption text for a specific purpose, use, or application