Metalloregulation is the mechanism by which cells are able to control their influx/efflux of transitional metal ions. This is a necessary process by which metal-dependent processes are not deprived, nor is the cell overwhelmed by high metal concentrations to the point of toxicity. Metals may act as cofactors of enzymatic reactions, redox components of electron transport processes (iron, copper), Lewis acids (zinc) or structural components (magnesium), as a few examples.

Analysis of such processes within cells, eg. Bacterial, requires acknowledgment of the constant changes in cell metal requirement and nutrient availability, which influences cells to make suitable adjustments in compensation. This include differing parameters of metal such as binding affinity to various protein regulators, as well as rate constants (Kf, Kr) for these reactions.

Quantitative modelling programs, such as Vcell, allow the production of a hypothetical bacterial cell model with freely alterable parameters, which can allow understand bacterial metalloregulation on essential metal nutrients. This model was produced to monitor competition of a regulator protein (aporegulator) and ligand for a metal ion. Through alteration of the affinities for these two components, analysis of the cell’s ability to balance accumulation of metal ions can be monitored, against changing ligand concentration.

The capacity of the cell to balance metal ion accumulation in the ligand buffer will be altered upon higher ligand concentration, and therefore transcriptional regulation will prevent metal influx.

In this model, low metal ligand affinity means that small changes in ligand concentration will have small effects on metal influx, as the aporegulator effects dominate. Conversely, when metal ligand affinity is high, ligand concentrations will have large effects on metal import as the aporegulator is unfavoured to bind to intracellular metal ions.

This modelling attempt did not include many other additional cellular processes associated with metalloregulation, which could be included into more complex models in the future. These include the addition of various other metals, both “useful” and toxic heavy metals, as well as various sequestering mechanisms, which would relieve the strict reliance on metal influx control.

The bacterial cell simulation was produced in Vcell 7.0. The reaction diagram allowed intracellular metal (MetalIn) to only react with ligand to form a metal ligand complex (MetalLigand) or with

This setup allows close monitoring of the effect a change in metal affinity of the ligand or aporegulator can change metal regulator concentration, and hence repressed promoter concentration.

Alteration of these affinities was done through alteration of Kr values of their reactions, whilst keeping Kf constant, which enabled easy monitoring of KD (Kr/Kf), ensuring it stays within a given range of 100 pM – 10 μM for metal ligand affinity and 1 pM – 100 nM for metal regulator affinity.

To prevent the influence of the other reactions present in the cell simulation, their reaction rates were kept constant through a large, irreversible Kf  (Kr = 0). The exception is reaction r2, which was left to be determined through the ratio of KD(lig) and KD(reg) (Appendix 1.3.3):

All reactant concentrations were also kept constant, except for ligand concentration, which varied between the given values 0.5 μM – 10 mM. (Table 1, Appendix 2.1.4.1).

To find suitable constants for KD(lig) or KD(reg), the other must be constant when one is varied. Therefore, suitable

constant KD(lig) and KD(reg)values were determined through plotting [Repressed Promoter] ([RepressedPromoter]) against Log([Ligand]). Concentrations were adjusted until a sigmoidal curve was seen over 0.5 μM – 10 mM [Ligand], which is a depiction of a system with a suitable responsiveness to change over the [Ligand] range. (Figure 1). This was plotted from the final (at plateau) value of 0.5 μM – 10 mM [Ligand] range, from 10 periods recorded over – seconds. Each value was calculated from varying the – (from to ) whilst keeping – constant (value). Values for KD(lig) and KD(reg) were chosen from those giving a [RepressedPromoter] value at the steepest point of the sigmoidal curve. These are KD(lig) = 0.005 μMand KD(reg) = 0.05 μM.

Figure 1: Plot of [Repressed Promoter] (μM) plateau values against log([Ligand]) at a range of KD(lig) and KD(reg) values which give a sigmoidal curve. 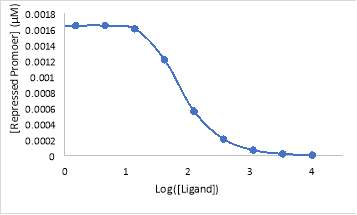 KD(reg) value was fixed, whilst KD(lig) was varied through variation of the Kr values for the reaction:

is dependent on the rate of formation of metal-ligand complexes and aporegulator availability, therefore its KD must also be altered when KD(lig) and KD(reg) are changed.

At high metal ligand affinity (low KD(lig)), metal was easily able to populate the ligand, compared to the aporegulator. Therefore, small increases in [Ligand] caused a large decrease in [RepressedPromoter]. This produces a log([Ligand]) against [RepressedPromoter] graph with a decreased plateau value. As all other reaction values are kept constant, this results in less effective repression of metal import, increasing [MetalIn].

Upon the inverse (high KD(lig)), metal import is more effectively repressed, and a larger proportion of cellular metal binds the aporegulator, instead of being buffered by the ligand. (Figure 2). 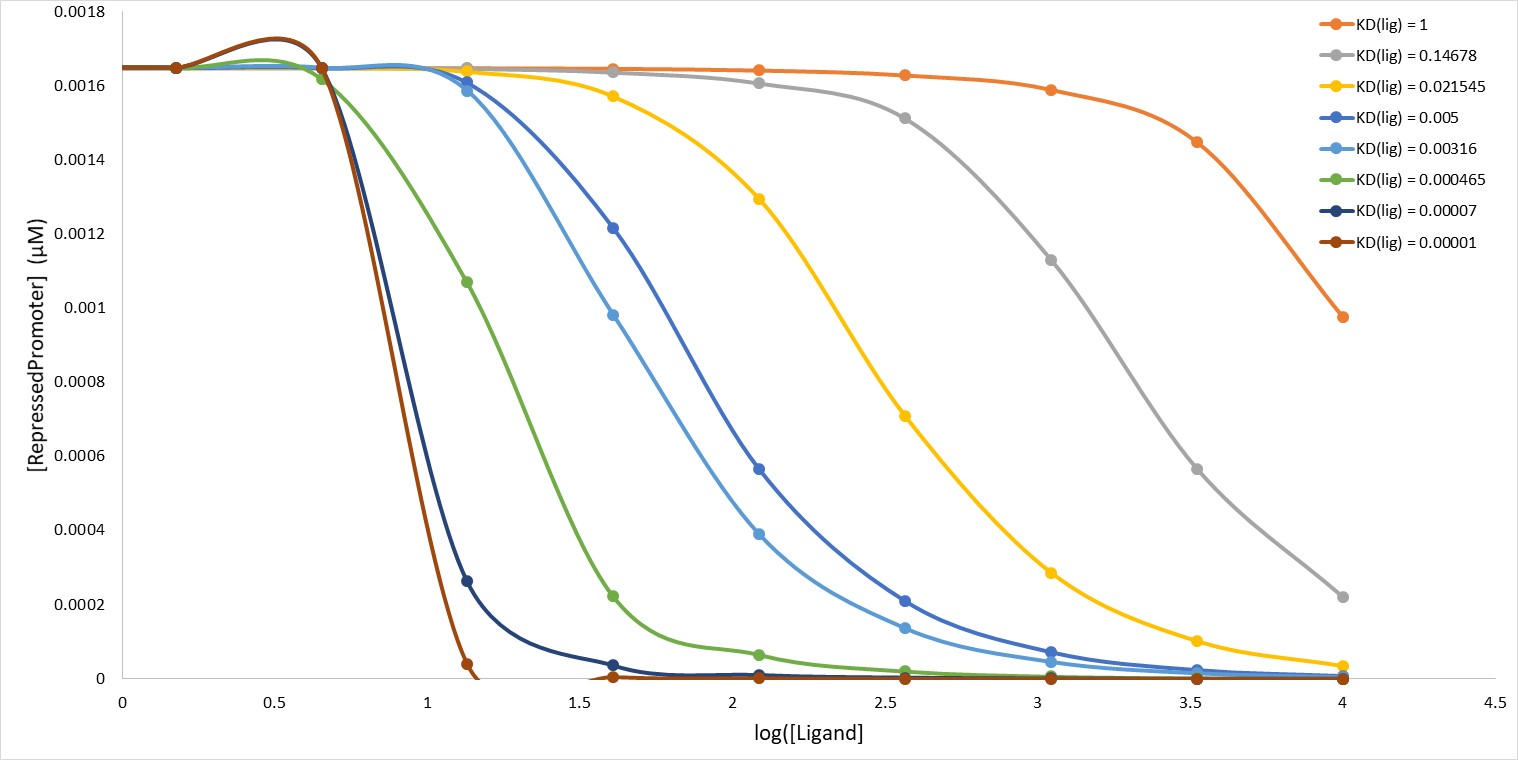 Comparing Figure 2 and Figure 3, opposite effects can be seen when decreasing KD(lig) and KD(reg). Decreasing KD(reg) decreases system responsiveness to [Ligand] changes, as aporegulator binding dominates, and prevents buffering of the system through ligand binding. Therefore, [ReperessedPromoter] decreases slowly and metal import is kept low. The converse is true for KD(lig), with high KD(lig) reducing the proportion of [MetalIn] which binds to the aporegulator, as there is a strong buffer system which allows more ligand to bind the additional metal ions to reduce the rate of repressed promoter formation, and so the rate of metal influx remains high.

Harnessing environmental inorganic micronutrients for metabolic optimisation played an important role in the origin of life. Metals cannot be synthesized or degraded, but many have multiple key functions, eg. calcium in cell membranes and catalysis. Early ribozymes were likely inefficient generalists [1], and specialist enzyme driven metabolism probably emerged in the RNA world, as the advantage of specific enzyme down-regulation  being impossible with high cross-catalysis[2]. However, copying fidelity likely prevented evolution of highly specific enzymes before chromosomes[3].

Metal limitation (nutritional immunity[4])/intoxication by the host is an evolutionarily ancient strategy to limit bacterial growth [5], with intoxication leading to growth arrest due to metalloprotein mismetallation[6]or free radical accumulation. Efflux systems function as virulence factors in several bacterial species[7], implying metal intoxication is a selective pressure in hosts. Mismetallation by metals higher in the Irving-Willams series is avoided through restricting access of non-cognate metals and allostery to the cognate metal, controlling regulator abundance and tuning regulator affinity to labile metal concentration and nature (eg. coordination geometry and polarizability of the ligands, cysteine content of the site.).

A simple wet experiment can be performed to test the simulation’s prediction of metal import and its repression.  The model organism gram-negative bacterium B. japonicum is used for studying metal metabolism and regulation in α-Proteobacteria [8], and maintains a constant intracellular manganese concentration through transporters such as MntH. MntH is expressed under manganese limitation[9] and transcriptionally regulated by the Mur repressor; an adaptation characteristic of α-Proteobacteria to favour manganese-dependent metabolism.

Agar plates with variable manganese concentrations, from the standard 0.2 μM to 150 μM, should be produced. Wild type, mntH KO, mur KO and mntH + mur KO colonies are added to each, and observation performed after a week of incubation by microscope.

The expected results would be that the mntH KO’s have no or little growth under low manganese concentrations, whilst the wild type strain would be less affected, whilst solo mur KO’s would have increased comparative growth due to the lack of repression. Other mechanisms than MntH transport also minorly contribute to manganese uptake, so the differences in growth may decrease at higher manganese concentrations.

If the predicted results are not seen for mntH mutants, this would suggest a significant alternate pathway for metal ion influx into the cell, and require alteration or expansion of the reaction diagram. Unexpected mur mutant results would suggest another compensating repressor to MntH, or that Mur does not repress MntH as thought.

[9] Hohle TH, O’Brian MR (2009) The mntH gene encodes the major Mn2+ transporter in Bradyrhizobium japonicum and is regulated by manganese via the Fur protein. Mol Microbiol 72:399–409.