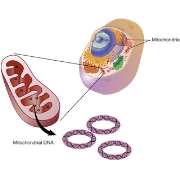 Mitochondria are energy producing Organelles present in both Human and Plant cells. They Convert Food into ATP through process of oxidative Phosphorylation. They have double membrane. Outer membrane separates inner side of mitochondria from cytoplasm, while inner membrane has invaginations forming cristae. Cristae define the matrix of mitochondria. Inner Membrane contains embedded five enzyme complexes responsible for oxidative phosphorylation system.

Mitochondria contain its own genome, called mitochondrial genome (mtDNA). It is a double-stranded, circular molecule containing a limited number of genes. Mitochondrial DNA is a small portion of genetic material present in eukaryotic cell, as major portion is present in Cell nucleus, and some portion in Chloroplasts in case of Plants.

In Humans, Mitochondrial DNA contains only 37 genes and approximately 16,600 base pairs and can be assessed as smallest chromosome. These 37 genes code for 2 Ribosomal RNAs, 22 Transfer RNAs and 13 polypeptides. These polypeptides are subunits of enzyme complexes of the oxidative phosphorylation system.

During Human Genome sequencing, Human Mitochondrial Genome was significant part of first genome to get sequenced.

Mitochondria are thought to be emerged due to incorporation of α-purple bacteria. Due to evolution, it transferred many of its essential genes to nuclear chromosomes, but mitochondria still have remains of its bacterial ancestor.

Mitochondrial Genome was discovered in 60’s by Margit M. K. Nass and Sylvan Nass by electron microscopy as DNAse-sensitive thread inside mitochondria. 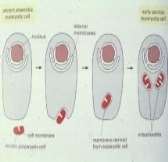 Endosymbiont Theory well explains the origin of mitochondrial genome. According to this theory, mitochondrial DNA is derived from the circular genomes of the bacteria that were engulfed by the early ancestors of today’s eukaryotic cells.

Each mitochondrion is estimated to contain 2–10 mtDNA copies. The majority of the proteins present in the mitochondria are coded for by nuclear DNA, but the genes coding for them are thought to have originally Bacterial origin.

Why do Mitochondria have its Own Genome?

Why do mitochondria and require their own separate genome, when other organelles that share the same cytoplasm, such as peroxisomes and lysosomes, do not? The question is not trivial, because maintaining a separate genetic system is costly: more than 90 proteins—including many ribosomal proteins, amino acyl –Transfer RNA synthases, DNA and RNA polymerases, and RNA-processing and RNA-modifying enzymes—must be encoded by nuclear genes specifically for this purpose.

The amino acid sequences of most of these proteins in mitochondria and chloroplasts differ from those of their counterparts in the nucleus and cytosol, and it appears that these organelles have relatively few proteins in common with the rest of the cell. This means that the nucleus must provide at least 90 genes just to maintain organelle‘s genome. The reason for such a costly arrangement is not clear, and the hope that the nucleotide sequences of mitochondrial and chloroplast genomes would provide the answer has proved to be unfounded.

Mitochondrial Genomes does not follow the Mendelian mechanism of inheritance as shown by Nuclear Genomes.

In Species like mussels, fruit flies and honey bees, mitochondria can be inherited from Father.

When Wild type genome cell mates with a mutant type genomehaploid cell, the resulting zygote contains a mixture of mutant and wild-type genomes. The two mitochondrial genomes fuse in the zygote, creating one continuous reticulum that contains genomes of both parental cells. When the zygote undergoes mitosis, copies of both mutant and wild-type mitochondrial DNA are segregated to the diploid daughter cell. In the case of nuclear DNA, each daughter cell receives exactly two copies of each chromosome, one from each parent. By contrast, in the case of mitochondrial DNA, the daughter cell may inherit either more copies of the mutant DNA or more copies of the wild-type DNA. Successive mitotic divisions can further increase either DNA, resulting in many cells arise that contain mitochondrial DNA of only one genotype. This random process is calledmitotic segregation.

When diploid cells that have segregated their mitochondrial genomes in this way undergo meiosis to form four haploid daughter cells, each of the four daughters receives the same mitochondrial genes. This type of inheritance is called non-Mendelian orcytoplasmic inheritance. 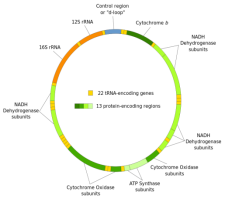 There are two types strands present in Mitochondrial DNA. First one is Guanine rich strand called Heavy Strand (H-strand), other one is cytosine rich strand Called Light strand (L-strand). They are due to different buoyant densities of each strand (‘heavy’ and ‘light’) in denaturing caesium chloride gradients. Heavy strand encodes 28 genes, and the light strand encodes 9 genes for a total of 37 genes.

Of the 37 genes, 13 are for proteins (polypeptides), 22 are for transfer RNA and two are for the small and large subunits of ribosomal RNA. 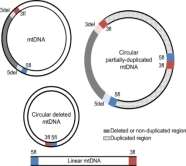 Experiments have shown that during evolution the rate of nucleotide substitution was 10 times higher in case of mitochondrial genomes as compared to nuclear genomes. The Reason Behind this can be reduced fidelity of mitochondrial DNA replication, inefficient DNA repair, or both.

As Only about 16,500 DNA nucleotides need to be replicated and expressed as RNAs and proteins in animal cell mitochondria, the error rate per nucleotide copied by DNA replication, maintained by DNA repair, transcribed by RNA polymerase, or translated into protein by mitochondrial ribosomes can be relatively high without damaging one of the relatively few gene products.

That is the reason why the mechanisms that perform these processes are relatively simple compared with those used for the same purpose elsewhere in cells. The presence of only 22 transfer RNAs and the unusually small size of the ribosomal RNAs would be expected to reduce the fidelity of protein synthesis in mitochondria.

The relatively high rate of evolution of mitochondrial genes is useful in estimating the dates of relatively recent evolutionary events, such as the steps in primate evolution. 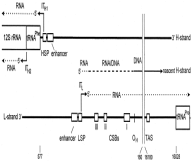 Mitochondrial DNA is replicated by DNA polymerase gamma complex, which is further composed of many other genes such as POLG gene and POLG2 gene.

The replication machinery is formed by DNA polymerase, TWINKLE and mitochondrial SSB proteins. TWINKLE is a helicase, which unwinds stretches of DNA in the 5′ to 3′ direction. 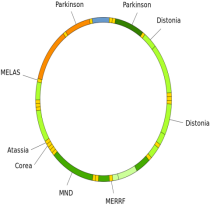 Mitochondrial DNA is susceptible to reactive oxygen species. Mitochondrial DNA is packaged by proteins and harbours significantDNA repaircapacity, these protective functions are less robust than those operating on nuclear DNA and are therefore thought to contribute to enhanced susceptibility of mitochondrial DNA to oxidative damage. This can result in alteration of the coding instructions for some proteins,which may have an effect on organism metabolism or fitness.

Mutations of mitochondrial DNA can lead to a number of illnesses including exercise intolerance and Kearns–Sayre syndrome(KSS), which causes a person to lose full function of heart, eye, and muscle movements. An experiment also suggests that they might be major contributors to the aging process and age-associated pathologies.

Recently a mutation in mtDNA has been used to help diagnose prostate cancer in patients with negative prostate biopsy.

Although idea is controversial, evidence suggests a link between aging and mitochondrial genome dysfunction.

As there is no change in Mitochondrial DNA from parent to offspring and higher mutation rate, it is a powerful tool for tracking ancestry through females (matrilineage) and has been used in this role to track the ancestry of many species back hundreds of generations.

It is also used in Phylogeny; biologists determine and then compare the mitochondrial DNA sequences from different individuals or species. Data from the comparisons is used to construct a network of relationships among the sequences, which provides an estimate of the relationships among the individuals or species from which the mitochondrial DNAs were taken. This approach has limits that are imposed by the rate of mtDNA sequence change.

Mitochondrial DNA was first admitted into evidence in California in the successful prosecution of David Wester field for the 2002 kidnapping and murder of 7-year-old Danielle van Dam in San Diego: it was used for both human and dog identification. This was the first trial in the U.S. to admit canine DNA.