The very well-studied p53 network has been revealed to regulate multiple miRNA’s and is known as tumor suppressor gene. Promising research in cancer repression is going on among the miRNA family of miRNA-34 (miR-34). As one part of the p53 network this family might play a key role in cancer therapy one day.

Cell cycle arrest and meanwhile DNA-repair are main functions of p53 network which include miR-34 activity. Furthermore apoptosis can be a result of p53 or miR-34 activity.

DNA damage and other cell stresses like hypoxia or telomere shortening are activating the transcription-factor p53 and therefore also the p53 miRNA’s (Fig. 1). The processing of the small non-coding miR-34 family, which is then able to bind mRNA’s and inhibit their transcription, follows the mains steps of miRNA processing. After transcription the miR-34 is further processed by DROSHA into a smaller pre-miRNA which then forms the hairpin structure. Until this point all processes were placed in the nucleus but now the hairpin pre-miRNA is transported into the cytoplasm and is cut down by Dicer into the even smaller, consisting of 20-24 nucleotides, ready for interaction miRNA.

Little amounts of miR’s have been found to be involved in cancer. Among these miR-34 is one that shows altered expression in many different types of cancer and is therefore of great interest in ongoing studies (Xingyue 2007). Focus here is lying on the interaction of miR-34 and the inactivation mechanism.

The family of the miR-34 consists of three members of miRNA’s which are able to regulate cell cycle genes, DNA repair and apoptosis. First one is miR-34a which is transcribed from a region in the chromosome 1p36. This region is known as a loss of function in many different tumors and lesser expression of miR-34a was also found in pancreatic tumors and neuroblastomas (Xingyue 2007). The sequence containing p53 binding site is located in a CpG island.

Second and third, miR-34b and miR-34c are transcribed from the same DNA sequence on the chromosome 11q23 but processed differently in their development (Bommer et al. 2007). The way of processing the miR-34b and miR-34c is hence bicistronic and has one transcript as origin. Findings of Bommer (2007) include a putative binding site for p53 in the miR-34bc gene region. The research of Bommer (2007) also showed the activation of miR-34 family through p53 activation via induced cell stress.

Additionally to miR-34a repression in cancer, miR-34b and miR-34c were also found to be expressed at lower levels in parts of non-small cell lung cancers (Xingyue 2007). The importance of miR-34 family in cancer is not clarified yet but an involvement of this siRNA family is definitely notably in many different kinds of cancer. 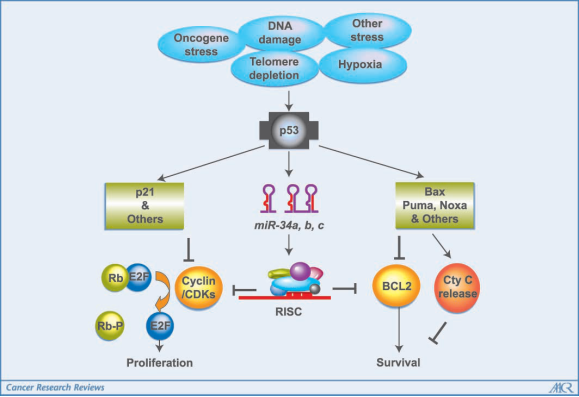 Figure 1: p543 network including miRNA-34 family which then gets integrated into the RISC (RNA induced silencing complex) to be guided to its target mRNA (Xingyue 2007)

Known gene interactions are mostly involving genes that are important for cell cycle, DNA repair or apoptosis (Xingyue 2007). This explains the high accordance of altered expression in cancer. During cancer development the normal cell cycle gets disturbed and important check points for DNA stability get lost and also cell proliferation might be uncontrolled and higher.

Cyclin dependent kinase 4 (CDK4) for example has been found to be regulated by miR-34 family (Xingyue 2007 and Bommer et al. 2007). CDK4 is an important step in cell cycle control. It regulates the cell division and is active in G1 and S phase of the cell cycle. The CDK4 is a target of miR-34.

Furthermore, the oncogenic B-cell lymphoma 2 (Bcl-2) has been found by Kasinski et al. (2012) among other groups to be repressed by miR-34 family. Bcl-2 is a gene which is regulating apoptosis. In breast, lung and prostate cancer the Bcl-2 gene has been found to be damaged.

Another interaction of miR-34 family is the transcription factor Cyclin E2 (Bommer et al. 2007). The transition from G1 to the S phase is the main regulatory point of Cyclin E2.

Bommer et al. (2007) was able to underline that miR-34 is able to arrest the cell cycle in a different manner than p53 would act like. The miR-34 family has been found to act on mRNA’s that occur downstream of the p53 activation pathway and is therefore another point of interest to regulate genes differently as through p53 activation (Hermeking 2007).

Interactions of miR-34’s downstream of the p53 network (compare figure 1) are showing the high importance in cancer development and the promising possibilities for cancer treatment with the help of miR-34 family. This means the intermediate stages of p53 are not needed when holding the cell cycle with miR-34 family.

2.3. CpG methylation as cause for inactivation of miR-34a

Epigenetic silencing mechanisms are also affecting the transcription of miR-34a gene. The CpG island of the miR-34a promoter region has been found by Lodygin (2008) to be hyper-methylated. The upstream region which also consists of a p53 binding site shows higher levels of methylation in many different cancer types (Lodygin 2008). If the promoter region is higher methylated than in wild type cells the methylated groups recruit histone deacetylases (HDAC) and forming of inactive heterochromatin is spread. In addition the p53 binding site is blocked and not available for the transcription-factor to activate the miR-34a in cases of DNA damage or cell stresses. The hyper-methylation is therefore a selective advantage for generating typical features of cancer cells like the inability of repairing damaged DNA. Altogether the miR-34a might be a tumor suppressor itself as one part of the p53 network. The inactivation of miR-34 is not only mutation of p53 or a loss of the chromosome region but has its own possible mechanism of inactivation.

Lodygin’s research (2008) detected also that the heavily methylated promoter region is not notably the only cause for inactivation of the gene in every cancer cell line, since there are exception to the hyper-methylated silencing there might exist other mechanisms to inactivate the miR-34a gene.

Therapeutic approaches of miR-34 usage have already been started by Wiggins et al. (2010) and other research groups. The outcomes were promising to repress the growth of cancer cells by introducing miR-34a. The tumor suppressor function of this miRNA, from my point of view, should be more clarified and studied to avoid unintended outcomes of the treatment. This is useful and necessary for a better understanding of the through miR-34 activated senescence of cell lines or cancer types (Hermeking 2007 and Xingyue 2007).

Further, the knowledge of other inactivation mechanism may contribute to development better treatments or genetic tests for early cancer diagnosis tests, since the methylation of the promoter region and loss of function mechanisms are seemingly not the only causes for miR34 dysfunctions.

All in all, the miR-43 family is an important point for targeting cancer therapies in the p53 network. The important abilities in regulating the cell cycle and apoptotic proteins are the main reasons for approaching a miRNA guided cancer therapy.