Para-Nonylphenol (NP) is an organic phenolic compound present in the domestic and most of the industrial discharge. It has extensive impact on the plants and animals. However, fish is highly responsive aquatic vertebrate as far as toxic effects of xenobioticsubstances are concerned. When the fish was exposed to low concentration of NPit does not showed any behavioural changes but, when the concentrations were gradually increased fish started showing the sign of distress. In the present study the lethal concentration of p-Nonylphenol was calculated to be 15.51 ppm and beyond 16.50 ppm Channa punctatus exhibited 100% mortality. The linear regression values obtained is y=20.32x-263.29. The coefficient correlation obtained is R2=0.7139. Throughout the experimental tenure the pH and temperature of water was maintained to get rid of its impact towards mortality of fish.

Industrial revolution giving us a gift called pollution. The mother planet earth has been severally getting affected by all kinds of pollution and hence we all living beings are equally prone to pollutional threat. Beside air pollution the water pollution is common threat to both the aquatic flora and fauna and also the dependent. There are innumerable types of organic and inorganic chemicals being dumped in the water in unbelievable concentration. It is of course leading to destruction of several micro and macro flora and fauna of aquatic ecosystem. Systematic study can be reveal to what extent this pollution would have destroying the organism at species level and unbalancing the aquatic ecosystem.

NP is chemical pollutant occurs abundantly pollutant in the aquatic environment (Kim et al., 2006) and from there it comes to the aerial and terrestrial environment. It is widely used in many of the industrial and agricultural products and it is discharged into the aquatic ecosystem in large amount (Ying et al., 2002). It is also recorded to accumulate in the internal organs of many fish and avian species, reaching its concentration 10-100 times higher. It is of course the public and scientific issue because it passes down to humans though the food chain and mimics the actions of natural hormones like estrogenic compounds in the body. In the present study we chose NP to find out the exact LC-50 by keeping in mind the great reduction of Channa punctatus species in the river Wardha having at its bank very famous paper mill industry (BILT).

In the present study, all the fingerlings of snake headed fish Channa punctatus were bought from the native fisherman of Mulchera (District-Gadchiroli). The fingerlings brought to the laboratory in healthy condition were kept for acclimatization for complete fortnight. The glass aquarium was thrice washed out with the solution of disinfectant potassium permanganate. Similarly fishes were also dipped in the solution for a while prior to start the acclimatization process. During this period fish were fed with boiled eggs and minced dried prawn in alternated days. Injured fingerlings were removed in order to avoid the cause of infection to the healthy fishes. The level of oxygen, pH-7.4 and temperature (27-30°C) was maintained throughout acclimatization period.

The chemicals such as Ethanol and p-Nonylphenol (NP) used for this study was purchased from HiMedia Pvt. Ltd., Mumbai. NP is soluble in organic solvents and does not dissolve in water.

Fingerlings were sorted (Size and weight) before exposing to NP. The various concentration of NP were prepared and fractionated for parts per million (ppm). Five tanks were set for different concentration of NP and a tank without NP was treated as a control. In each tank 10 fish were placed. Dead fish were quickly removed in order to avoid the infection.Water of both experimental and a controlled tank were changed every day. The present experiment was carried out for 4 days i.e. for 96 hrs. LC-50 was calculated according Finney (1971) and graph were prepared by using the Microsoft Excel-2010.

Disposal of phenolic compounds includes p-Nonylphenol (Fig.1) has been increasing with the gradual increase in size of population worldwide. NP isbiodegradable compound but degrades very slowly in the nature (Ahel et al., 1994). It is also suggested that this compound accumulates gradually in the living system and gets heavily deposited in the organism of topmost tropic level of the food chain. NP variedly affects the system and lead to cause variety of dysfunctions. In Gilthead Sea bream (Sparus auratus), Atlantic salmon (Salmo salar) and Zebrafish (Danio rerio) NP interfere with osmoregulation (Weber et al., 2003; Arsenault et al., 2004; Carrera et al., 2007; Lerner et al., 2007).

In present study, the fingerlings of Channa punctatus was exposed to NP at concentrations 5, 10, 15 and 20 ppm for 96 hrs. It was observed that at concentrations 5 and 10 ppm fish fingerlings showed no death and even no sign of any distress were observed till four days. At 15 ppm concentration 20% of fingerlings were died. However at 20 ppm no fish fingerlings were survived, on the very first day of exposure within an hour all 10 fish fingerlings died. In order to assure, same experiments were repeated thrice and found same results. The severe sign of distress were observed in those fish died within an hour. Fingerlings started striking to glass panels, opercular and opening and closing of mouth was increased. Later fingerlings started showing fast whirling action and after this suddenly became calm and got died. We could not understand the said action but it could be due to neurotoxic effect of NP. Some workers also have reported the neurotoxic ettects on cell growth (Kudo et al., 2004 and Kim et al., 2006). 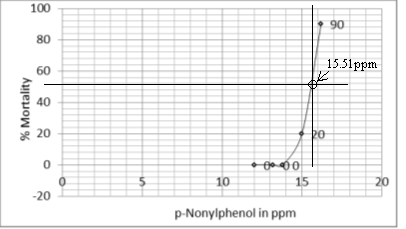 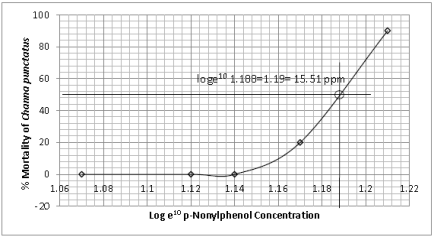 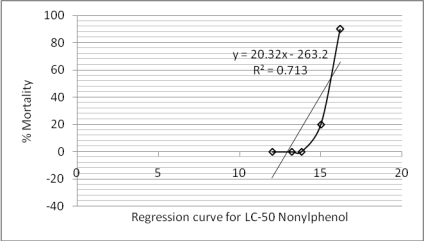 NP is xenoestrogen and is recognised as endocrinal disruptor. It is suggested that bioaccumulated nonylphenols adversely affects fish fauna (Ahel et al., 1993; Cox, 1996). However its low concentration can cause death of fish (Staples et al., 2004; Vazquez-Duhalt et al., 2005). Indeed very little work has been done to find out the effect of lethal concentration (LC) in fish, Rivero et al., (2008) suggested 0.032 ppm LC for Orychroeis niloticuls and Satyanarayanan et al., (2011) reported 3.48 ppm for Clarias gariepinus. The environmental protection agency (EPA) recommended that if on an average one hour concentration of nonylphenol should not exceed 28 ppm for more than every three years in orde to not affect the freshwater life (Vincent and Sneddon, 2009).

The authors are very much thankful to the Principal, Shree Shivaji Arts, Commerce and Science College for providing the laboratory facilities and constant inspiration during work.

Kudo C, Wada K, Masuda T, Yonemura T, Shibuya A, Fujimoto Y, Nakajima A, Niwa H and Kamisaki Y (2004) Nonylphenol induces the death of neural stem cells due to activation of the caspase cascade and regulation of the cell cycle. Journal of Neurochemistry,88: 1416-23.