Effect of hexane fraction of P. niruri on glucose uptake in L6 cells:

Figure 79 represents the effect of hexane fractions of P. niruri whole plant, insulin and metformin on glucose uptake by L-6 myotubes. It is evident from the results that hexane fraction of P. niruri caused increases glucose uptake in concentration dependent manner in L6 cells. The hexane fraction of P. niruri whole plant increases basal glucose uptake in L6 myotubes to a significant level at a minimum concentration of 10 μg/ml (1.26-fold, p<0.05). Maximum stimulation was observed at 20 μg/ml concentration, calculated to be around 1.52-fold (p<0.01) as compared to basal control cells. Results were compared with the standard antidiabetic drug Insulin and metformin. Insulin alone caused around 1.65-fold (p<0.01) stimulation and metformin caused nearly 1.78 fold (p<0.01) stimulation at 100nM and 500μM concentration, respectively (Fig 79). 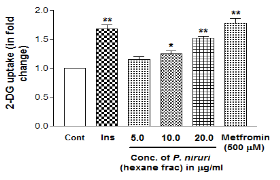 Figure 1: Effect of hexane fraction of P. niruri whole plant on 2-deoxyglucose uptake in L6 myotubes. Cells were incubated for 16 h with different concentrations of P. niruri. After incubation myotubes were also stimulated with 500 μM concentration of metformin for 16 h, followed by the determination of 2-DG uptake. Results are expressed as in fold change. 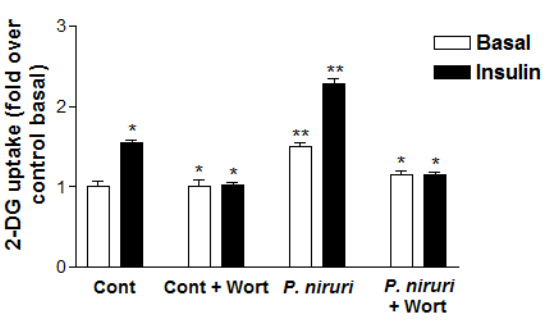 Figure 2: Effect of wortmannin on insulin and hexane fraction of P. niruri whole plant induced glucose uptake in L6 myotubes. Cells were incubated in the absence (Cont) or the presence of hexane fraction of P. niruri at 20 μg/ml conc. for 16 h without or with wortmannin (100 nM). After incubation myotubes were left untreated (white bars) or stimulated with 100 nM insulin (black bars) for 20 min, followed by the determination of the glucose uptake. Results are expressed as fold stimulation over control basal. 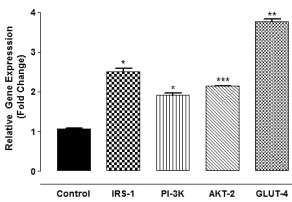 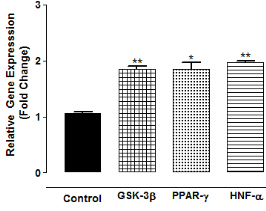 Figure 3: Effect of the hexane fraction of P. niruri whole plant on the expression of IRS-1, AKT2, GLUT4, PPAR-γ, GSK-3β and HNF-α genes in L6 myotubes. L6 myotubes were treated with 20 μg/ml concentrations of hexane fraction of P. niruri for 16 h and then subjected to Real Time PCR analysis. Experiments are performed in triplicate. Results shown are mean ± SE of three independent experiments. *p< 0.05, **p<0.01, relative to control.

T2DM is a disorder of dysregulated glucose homeostasis which may due to either alteration in insulin secretion and/or insulin sensitivity, resulting in decreased insulin stimulated glucose uptake, failure to suppress hepatic glucose production, and accumulation of hepatic lipids. Many oral antidiabetic agents are now available for the management of patients with type 2 diabetes mellitus. These agents have different modes of action and have different types of side effects. These oral agents can be used in combination to give better glycemic control than is possible with each alone. The multi-factorial pathogenicity of diabetes demands a multimodal therapeutic approach. Thus future therapeutic strategies require the combination of various types of antidiabetic agents. Therefore, better management of type 2 diabetes is sorely needed with plant based drugs that can enhance the glucose uptake and inhibit PTP1b in the muscles, hepatocytes, and adipose tissues and also inhibits intestinal α-glucosidase, and eye lens aldose reductase activity.

STZ-induced diabetic animals are most widely used for screening the compounds including natural products for their insulinomimetic, insulinotropic and other hypoglycemic/antihyperglycemic activities (Bates et al., 2000). In diabetes the hyperglycemia also induces the elevation of plasma levels of urea, uric acid and creatinine, which are considered as the significant markers of renal dysfunction and chronic hyperglycemia is involved in the etiology of development of diabetic complications. (Daisy et al., 2009, Mahalingam and Kannabiran 2010).

The present study revealed a significant decrease of basal serum insulin after 10 weeks of STZ injection. This decrease was of percentage change, 45-49% as compared with normal non-diabetic rats. Such results agree with that of (Akhani et al., 2004) and may be ascribed to the diabetogenic effect of STZ which lead to destruction of β-cells and decreased number of insulin-containing secretory granules as indicated in the present study. On the other hand the results obtained for blood glucose profile of STZ-induced diabetic rats showed high levels of blood glucose and impaired glucose tolerance as compared with the normal non-diabetic rats. These results are in accordance with the finding of several authors using STZ-induced diabetic animals (El-Naggar et al., 2005, Helmy et al., 2007, Hassan et al., 2008). As recorded by (Caro et al., 1990) glucose intolerance could arise from either a defect in insulin secretion as in case of insulin dependent diabetes (Type 1) or a defect in insulin resistance (receptor or post-receptor defect) as in case of non insulin dependent diabetes mellitus (Type 2). Our finding on serum insulin concentration confirms the previously mentioned hypothesis.

In the present study, total lipids were increased in serum of STZ-diabetic rats as compared with the normal ones at the end of the experiment. Our results are in accordance with the finding of (Lalhlenmawia et al., 2007, Rawi et al., 1995) who recorded a marked increase of total lipids in serum of STZ-induced diabetic rats. Several investigators, however, recognized that insulin deficiency in STZ -diabetic animals brings about an enhanced breakdown of fat (Sheela et al.,1992, Rawi et al., 1998) increase in mobilization of free fatty acids from the peripheral depots (Kumar et al., 2010, Shirwaiker et al., 2004) and consequence of the uninhibited actions of lipolytic hormones (glucagon and catecholamines) on the fat depots (Ravi et al., 2005). The antihyperglycemic and anti dyslipidemic activity of the hexane fraction of the ethanolic extract was confirmed by multiple dose treatment of hexane fraction of P. niruri whole plant on STZ induced diabetic rats for 28 consecutive days. It has been found that treatment of this plant fraction significantly improved glucose tolerance, markedly elevates the serum insulin level of diabetic rats this indicates that fraction may promote the release of insulin from β cells of pancreas. As shown in the Table 5 the elevation of serum AST and ALT levels (liver function marker enzymes) may reflect the damage of the hepatic cells (Rawi et al., 1995, Kim et al., 2006), concluded that the elevation in AST and ALT levels may be due to the destructive changes in the hepatic cells as a result of toxemia. Hyperglyceamia also induces the elevation of plasma levels of urea, uric acid and creatinine, which are considered as the significant markers of renal dysfunction (Daisy et a; 2009, Mahalingam and Kannabiran, 2010) is significant increase in the serum level of urea, uric acid and creatinine in the diabetic rats when compared with respective normal control rats.

The C57BL/KsJ-db/db mice at 12 weeks of age exhibited most of the human characteristics of type 2 diabetes including hyperglycemia in the fasting and fed states, hyperinsulinemia and insulin resistance (Shafrir et al., 1992). The hexane fraction of P. nirurishowed significant fall in peripheral blood glucose profile and also improved the glucose tolerance of db/db mice. Further hexane fraction of P. niruriwhole plant also showed antidyslipidemic activity in db/db mice that is comparable to rosiglitazone, at 10.0mg/kg b. w.

Therefore in present study the hexane fraction of P. niruriwas further evaluated on glucose uptake in L6 cell lines of rat skeletal muscles. Since skeletal muscle cells are considered a well-established in vitro model to study the regulation of glucose transport, since in skeletal muscle, glucose transporters are the first rate-limiting step for glucose utilization under physiological condition (Clow et al., 2004). Glut 4 exists exclusively in insulin-sensitive tissue mainly skeletal, cardiac muscle and adipose tissue and is thus the major transporter responsible for insulin-mediated whole-body uptake (Eddouks et al., 2009). Impaired glucose transport with reduced Glut-4 translocation and disturbance in insulin signaling cascade are the major defects in insulin resistance and type-2 diabetes mellitus. Results of the present study demonstrated that incubation with hexane fraction of P. niruricaused significant stimulation in glucose uptake in L6 skeletal muscle cells. Incubation with 20 μg/ml concentration of hexane fraction of P. niruristimulated the glucose uptake by around 1.52-fold, which is higher than 500 µM concentration of standard antidiabetic drug metformin which shows 1.78-fold stimulation at 20 μg/ml concentration. Since uptake of glucose is the rate limiting step in its utilization, observed antidiabetic effect of hexane fraction of P. nirurimay be mediated, at least in part, through increased utilization of glucose and skeletal muscle may be the major target of action.