At present Ireland has an “unsolved crime” database, which contains DNA profiles acquired from crime scenes that are believed to have come from the perpetrators. 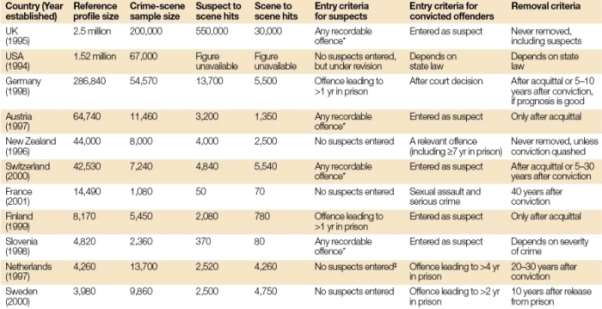 The growth of DNA Databases has essentially restricted the DNA profiling technology to the use of core STR markers which have been used to generate DNA profiles that are now numbering in the millions, and should DNA profiling progress the retesting of all individuals currently represented in the international databases would be an exercise in futility.

Individuals will differ from one another in terms of their STR profile. STR genotype can then be put into an alpha numeric form for searching on a DNA database.

This method of entry onto DNA databases is universally accepted.

TABLE 2: What would be entered into a DNA database for searching

Currently, the technique used for DNA profiling in the UK is SGM Plus® (SGM+), which analyses ten markers known as Short Tandem Repeats (STRs) plus a gender marker. STRs are short sequences of DNA that are repeated several times. The number of repeats varies between individuals. A DNA profile consists of 20 numbers and a gender indicator. The probability of the DNA profiles of two unrelated individuals matching is on average less than 1 in 1 billion (1,000,000,000). The discriminatory power of the analysis reduces for related individuals. SGM, used prior to SGM+, examined six of the same markers plus the gender marker and had a lower discriminatory ability .Certain profiles on the NDNAD are based on previously used SGM. SGM profiles are updated to SGM+ in the instance of a match. DNA profiles can be obtained from samples of minute quantity such as saliva, blood and semen acquired from crime scenes. They can be used for identification, or to establish the extent to which people are related and may offer indications of ethnic origin. They do not provide any information on genetic disorders or susceptibilities.

The Combined DNA Index System (CODIS) which is the largest DNA database in the world was launched in October 1998 and now links all 50 states in America. It is used for connecting serial crimes and unsolved cases with repeat offenders. It has a Convicted offender and forensic case samples along with a missing persons index. It requires 13 core STR markers and contains more than 13 million DNA profiles. 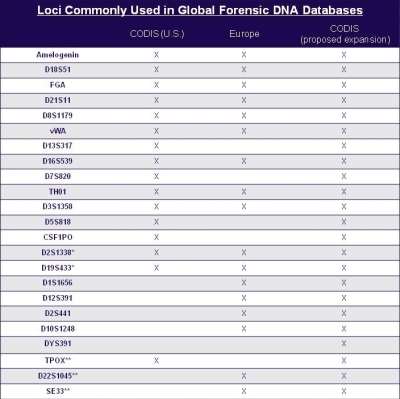 Table 3: Loci most commonly used in global forensic DNA databases, including the current CODIS set in the United States, which is also used by many other countries, as well as the set now used most commonly in Europe, and the proposed expanded CODIS set

The addition of these core loci has been initiated in anticipation of a significant increase in the size of the database. The International Criminal Police Organization (INTERPOL) has adopted the core European loci, enabling governments within Europe to compare samples across countries.

The Criminal Justice (Forensic Evidence and DNA Database System) Bill was passed in Ireland in 2010 to allow for the implementation of a National database.

The DNA Identification Act of 1994 (42 U.S.C. §14132) sanctioned the establishment of the National DNA Index. This DNA Act specifies the categories of data that may be maintained in NDIS (convicted offenders, arrestees, legal, detainees, forensic (casework), unidentified human remains, missing persons and relatives of missing persons) as well as requirements for participating laboratories relating to quality assurance and privacy.

How long are samples held?

At present, almost six million DNA profiles from both suspects and convicted criminals are stored in European databases, and over one million person-to-stain and stain-to-stain hits have been acquired. The databases have several organisational structures which are subject to the national legislative background in each country. These govern inclusion criteria for offender profiles, storage of DNA profiles and reference samples, and record removal. Also, each country has a distinct number of STR loci that must be typed routinely for each sample to be accepted for inclusion in the database.

DNA evidence is easy to acquire because genetic material is found in almost all human cells. As a result, on contact biological traces are left behind. These can be used to identify individuals and link them to the places they have been. The quantity of DNA required for analysis can be acquired from even the smallest biological sample, thus allowing matches to determined from crime scene evidence with suspects. Although forensics is a science principally ingrained in probabilities, even a confirmed “match” does not provide concrete proof of guilt. DNA databases which are designed to simplify the course of linking previous offenders to current crimes are beset by concerns involving individual genetic rights and difficulties associated to delayed sample entry, both of which hamper the basic usefulness of these databases. Consequentially, even though DNA databases are irrefutably significant to the present justice system, their ramifications and ethical questions are subjects of continuing discussion within the scientific, legal, and law enforcement communities.