The prokaryotes are a group composed of millions of genetically different unicellular microorganism. They have a low structural diversity, however are genetically and physiologically very diverse (Kenneth Todar, 2009). Particular traits help to assemble or distinguish, particular group of prokaryotic organisms to microbiologists. The classification scheme is dominated by the prokaryotes phylogeny. In the phylogenic Tree of Life, prokaryotes are divided into 2 domains:

The new edition of Bergey’s Manual of Systematic Bacteriology, revealed the existence of 24 different phyla of bacteria. Extant phyla of the Domain Bacteria:

Bacteria are unicellular organisms and most of them multiply by binary fission. Water bodies, soil and air are teeming with these microscopic organisms known bacteria. Most of them are free-living microorganisms; however some of them need animal or plant hosts to complete their live cycle. Scientifically bacteria are the most abundant living things on earth. Bacterial study also called as, Bacteriology, showed that these microscopic organisms are intricately linked to every life process, whether that of human animal or plants. Bacteria absorb nutrients from their surrounding environment secret a mixture of toxins that help their growth and survival and excrete waste products.

Structure, Size and Shape of bacteria

Each bacterium is a single cell, which is very minuscule, about a few micrometers (10-6 meters) in length and has a very simple structure. A bacterium cell has five important structural constituents, a cell wall, a cell membrane, a nucleoid (DNA), ribosomes and a kind of surface layer which can or can not be built in the wall. According to the structure, there are three distinct regions of the cell. Starting with appendages which are attached to the surface of the cell in form of flagella or pili, a cell envelop, constituting of a capsule, a cell wall and a plasma membrane and finally the cytoplasmic region that contains the cells organelles.

Various bacteria can be identified, simply through visual perusal. The identification begin by considering the appearance of the bacterial colony, followed by viewing individual bacterium under a microscope and taking into consideration the shapes, types of groupings and other feature such as the location and number of flagella. According to shapes and cell arrangements, there are three main morphological categories of bacteria, cocci (spherical), bacilli (rod-shaped) and spiral (twisted) however pleomorphic bacteria can have various shapes. Cell organisation can be singularly, in clusters and in chains. 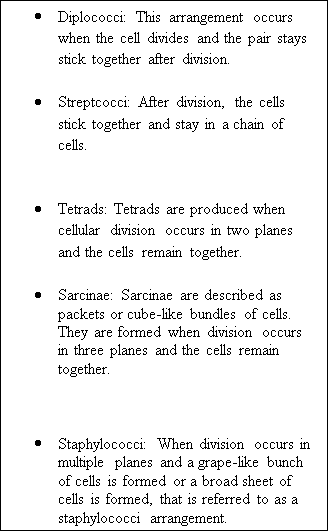 Cocci may be oval, elongated, or flattened on one side and can remain attached after cell division. 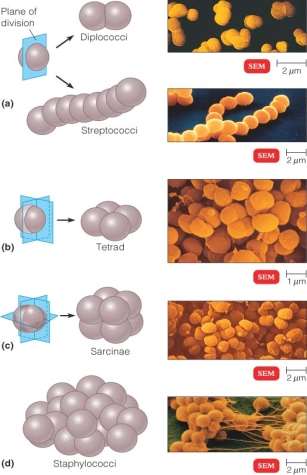 Bacillus is a rod shape. As bacilli divide only across their short axis there are fewer groupings. 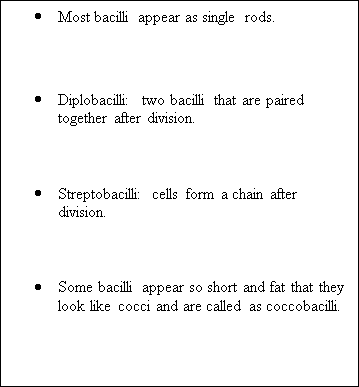 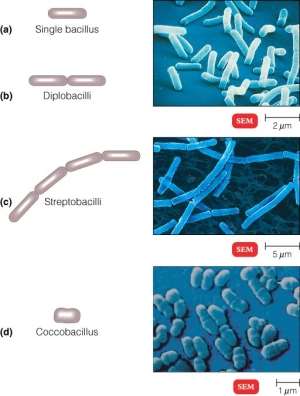 Spiral bacteria have one or more twists. 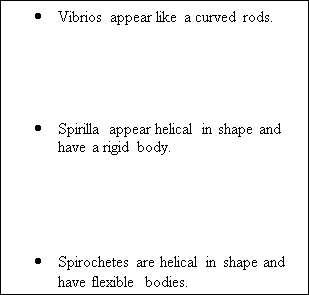 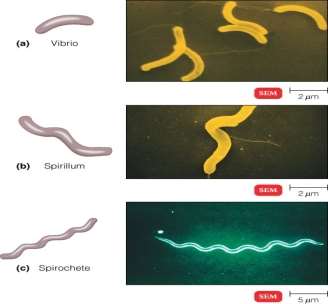 Bacteria have various requirements for growth. As bacteria are greatly affected by environmental conditions, their growth depends on the support of their environmental niches for their individual needs. The main environmental factors affecting microbial growth are pH, water activity, oxygen levels and temperature; however the availability of nutrients in their surroundings is also an important factor (Micheal H.Geradi, 2006). The major nutritional types of bacteria are (Anon)

Microbial classification according to environmental requirement for growth.

Physical and chemical conditions of the environment greatly affect the activities of microorganisms. Different organisms react differently the various kinds of environmental conditions. An environment which is favourable to one microorganism may be harmful another; however some microbes have developed tolerance to adverse condition in which they cannot growth properly. Organisms may respond differently to a habitat in term of, survival, growth, differentiation and reproduction (E. B. Smith). The major factors affecting microbial growth are:

Temperature probably is the principal factor affecting growth, because if temperature changes occur microorganisms will stop growing. The average temperatures for bacterial growth vary among microorganisms. Some species of microbes can grow at low temperatures as -10oC and others at high temperatures as 100oC or even higher (John Blamire, 2000). The higher and lower temperatures influence the cell metabolism. At low temperatures, particles move slower, enzymes are unable to control chemical reactions, and consequently the viscosity of the cytoplasm brings all activity to a halt. An increase in temperature make particles to move faster, metabolism is boost up by enzymes activities and growth rate increases. However cellular growth ceases as temperature increases to a point where enzymes denaturation occurs due to higher rate of activities (John Blamire, 2000). Each microorganism has

These three types of temperatures are called cardinal temperature and are unique to each type of organisms.