Explain all types of inheritance highlighting the monohybrid and co dominant inheritance in particular.

Inheritance is the genetic traits and characteristics that are passed on from the parent to the next generation of offspring. There are a few types of Inheritance, Dominant-Recessive, Incomplete Dominance, Co Dominant, Sex Limited, Sex Linked and Monohybrid.

Monohybrid – This is when two organisms that only differ at one trait are bred together. This can be very usefully, as the offspring can be determined by looking at the genes of the parent chromosomes and also this process can prove very useful in selective breeding of plants and animals. However the most usefulness of monohybrid crossover is that of organisms with inherited disease, knowing about the alleles can predicted the outcome of the diseases being passed on to the offspring.

As chromosomes come in pairs, each chromosome pair will have a gene at the same point. At this point the gene can come in different forms, these different forms are called alleles. Both of the chromosomes will have one allele within the pair, if both alleles are the same they are called, homozygous gene, if they are different they are called heterozygous gene. For example H is a allele for height within one chromosome it produces tall offspring and the other allele is h within the chromosome it produces short offspring. Therefore if there is a combination of alleles HH or hh of that gene it would be a homozygous gene, but if the combination is Hh then it would be a heterozygous gene (S-cool the revision website, 2015).

Dominant – This is when one or both gametes are dominant, meaning genes that stop other genes from showing their traits, the dominant traits are inherited by the offspring.

Recessive – When the homozygous, are recessive, meaning genes that do not show the traits even when they are present, the off spring will inherit the recessive trait. 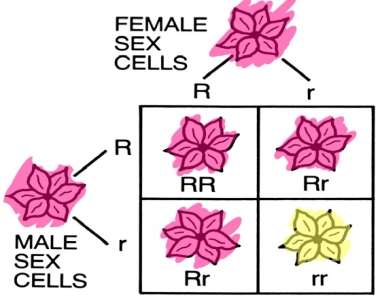 Incomplete Dominance – This is when no one of the alleles has dominance over the other alleles. The offspring would result in a mix between the two homozygous of the parent phenotype, this is a feature that is resulted by the genes and their interaction to the environment, therefore the result would be of heterozygote a pair of two alleles that are different for example if a blue and yellow flower breed, it would result in a green flower.

Co Dominant – This when both alleles within the heterozygote organism show their trait equally by phenotype, for example in some chickens black feather are co dominant with white features resulting in a black and white feathered chicken.

Describe the inheritance of ABO blood groups, specifying the role of multiple alleles. 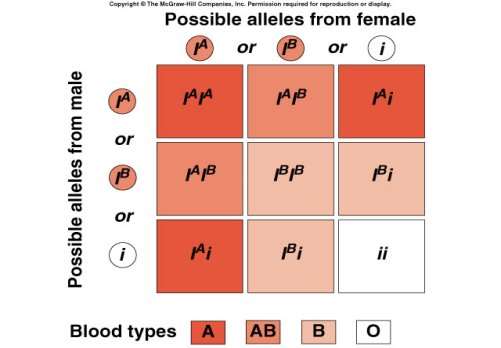 A+ (A positive) if you have A and rhesus antigens.

A– (A negative) if you have A antigens but not rhesus antigens.

B+ (B positive) if you have B and rhesus antigens.

B– (B negative) if you have B antigens but not rhesus antigens.

AB+ (AB positive) if you have A, B and rhesus antigens.

AB– (AB negative) if you have A and B antigens but not rhesus antigens.

O+ (O positive) if you have neither A nor B antigens but you have rhesus antigens.

O– (O negative) if you have do not have A, B or rhesus antigens.

Describe the inheritance of sex chromosomes and explain sex linked inheritance with examples. 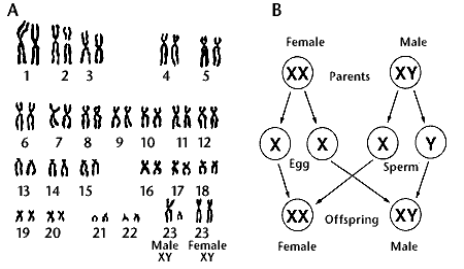 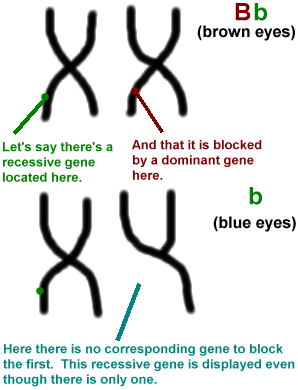 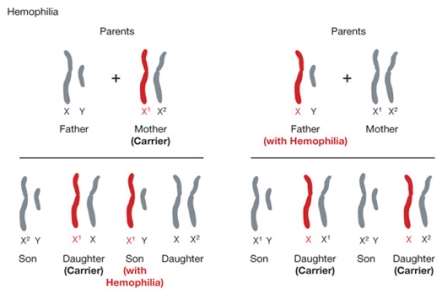 Some examples of recessive sex linked disorders are colour blindness, where there is an inability to distinguish between certain colours. Hemophilia, this is where the blood does not clot due to the absence of one or more proteins needed for blood clotting.