Black pepper, fennel and cumin are extensively used as spices in India. Seed pathogens adversely affect the production and quality of spices. The mycoflora associated with spices not only deteriorate the quality of spices but also increase the chance of consuming toxic elements through harmful fungi like Aspergilli. The present investigation deals with the isolation and identification of the fungi associated with the spices. The mycoflora of test spices was screened by agar plate method and percent incidence of individual fungus was recorded. Twelve fungal species were found on seeds of black pepper, eleven on fennel and eight on cumin. Total fifteen fungal species were found to be associated with the seeds of three test spices viz. Alternaria alternata, Aspergillus flavus, A. fumigatus, A. nidulans, A. niger, Chaetomium globosum, Cladosporium cladosporioidis, Curvularia lunata, Fusarium moniliforme, Helminthosporium tetramera, Mucor variance, Penicillium chrysogenum, Rhizopus nigricans, Syncephalastrum racemosum and Torula herbarum. Five fungal species viz. Aspergillus flavus, A. fumigatus, A. niger, Rhizopus nigricans and Cladosporium cladosporioidis were common and dominant seed fungi on all three test spices. Maximum 23.00% and minimum 3.0% percent incidence was reported of Aspergillus niger and Chaetomium globosum on the seeds of cumin and black pepper respectively.

Spices are valued for their distinctive flavours, colours and aromas and are among the most versatile and widely used ingredient in food preparation and processing. India is the largest spice producing country in the world. About 63 different spices are cultivated in the country (Divakar and Sharma, 2001). Seed-borne pathogens present externally or internally or associated with the seed as contaminant, may cause seed abortion, seed rot, seed necrosis, reduction or complete inhibition of germination as well as seedling damage resulting in development of disease at later stages of plant growth by systemic or local infection ( Khanzada, et.al. , 2002).

Literature on seed mycoflora of spices was revealed and observed by several workers. Srivastava and Chandra (1985), studied the mycobiota of coriander, cumin, fennel and fenugreek in India and reported that Aspergillus followed by Fusarium were the most frequent members. Hashmi (1988), reported 20 genera and 46 species of seed- borne fungi on seeds of spices in Pakistan. Rani et.al., (1995); Jain and Jain (1995); Seema and Basu (2003); Bokhari (2007); Sumanth et al., (2010); Plant (2011); Hedawoo and Chakranarayan (2011) and Ramesh and Jayagoudar (2013) also studied the seed mycoflora of different spices.

Samples of Piper nigrum L. (Black pepper), Foeniculum vulgare Mill. (Fennel) and Cuminum cyminum L. (Cumin) were collected from markets and stockists of Amravati District. Samples of each spice was mixed individually and prepared a composite sample of each variety, as the method described by Neergaard (1973). For the study of seed mycoflora Agar Plate Method (APM) was implemented, as recommended by ISTA (1966) on PDA medium. Results were recorded after eight days of incubation Incubated seeds were observed under stereo-zoom microscope and colony, fungal characters were recorded. Number of colonies of each fungus was counted and percent incidence of each fungus was calculated. The identification of seed mycoflora was done by referring authentic relevant literature (Subramanian, 1971; Barnett and Hunter, 1972; Neergaard, 1977; Gilman,2001; Jamaluddin et. al., 2004; Nagmani et. al., 2006, Mukadam et.al.,2006). Isolated fungal cultures maintained on Czapek’s Dox agar nutrient medium.

Table-1: List of isolated fungi and their incidence on seeds of different spices 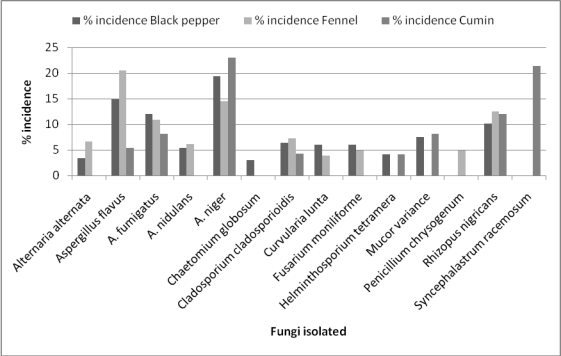 During the study all the spices showed a heavy infestation of fungi. Maximum appearance of saprophytes on unsterilized seeds reduced the appearance of some deep seated fungi. Total fifteen fungi were isolated from the three test spices. It indicates the ability of fungi in developing association with broad spectrum of seeds, irrespective of their types. Similar reports regarding the incidence of fungi with spices have been given by several workers. Rani et.al. (1995) studied mycoflora of five spices, in which species of Alternaria, Aspergillus, Curvularia, Rhizopus and Mucor species were most common. Sumanth et.al. (2010) observed that among the tested spices (ammi, caraway, cardamom, coriander and cumin), Alternaria alternata, Aspergillus flavus, A. niger, A. ustus, Cladosporium cladosporioidis, Curvularia lunata, Fusarium oxysporum, Fusarium roseum, Helminthosporium tetramera, Trichoderma viride show maximum incidence on agar plate. Ramesh and Jayagoudar (2013) reported some most prominent mitosporic fungi genera with percent occurrence as – Aspergillus (25.4%), Cladosporium (8.8%), Curvularia (8.7%), Penicillium (7.1%), Alternaria (5.9%) and Fusarium (5.9%) on some spices from Dharwad. They further stated that, PDA media shows highest (84) number of fungal isolates.

Spices are most important agriculture commodities, because of their aroma and taste they are widely used in food preparations throughout the world. Due to poor storage and agriculture practices spices are contaminated from field to fork level. If the fungi gets conductive atmosphere for growth they grow on spices and secretes toxins, digestive enzymes and other secondary metabolites. This will results into destruction of spice quality, taste, aroma, and makes the spice unfit for the consumption and germination. During the investigation all the spices showed a heavy contamination of fungi however, the extent of infestation varied with the spices may be due to their different contents and physiochemical qualities. Therefore, it is very necessary to find the ways and means to reduce the fungal contamination of spices by improving agriculture and storage practices.