A detailed explanation of why I think Gene editing and CRISPR are important topics in current biology.

The ability to change the DNA of an organism is called gene editing, this technology allows genetic material to be removed, added or altered. This technology was first accomplished in 1972 by Herbert Boyer and Stanley Cohen, since then it has been further developed and perfected, then in 2012, the CRISPR/cas9 method of gene editing was discovered. This gave scientists a quick, cheap and versatile tool to edit genes (“Herbert W. Boyer and Stanley N. Cohen”, 2019).

The CRISPR/Cas9 technology has been a revolutionary breakthrough in the field of Genetic modification. It allows us to change the genetic material in living organisms, by using a defensive mechanism originally used by bacteria. the CRISPR/Cas9 method allows the ability to selectively modify and change DNA cheaply and efficiently, unlike its predecessors and is driving innovative applications from basic biology to biotechnology and medicine (Hsu, Lander and Zhang, 2014). However, there are many ethical and technical issues that surround this topic which I shall discuss in further detail.

The CRISPR DNA sequence and the Cas-9 protein form the two components of the CRISPR/CAS9 system. CRISPR is an acronym for Clustered Regularly Interspaced Short Palindromic Repeats which are short interspaced sequences of repeated DNA. In between these short strands of identical DNA are other smaller strands of DNA. During the discovery of CRISPR in Escherichia coli researchers found that the sequences of DNA in between the repeats were virus DNA.  This shows that when the virus attacked the bacteria, the virus DNA was stored in the bacterial genome, which allowed for quick recognition of the virus should it attack again, but this time it would send out the protein Cas9, this protein has the capabilities to act as ‘molecular scissors’ and separate a sequence of nucleotides from the virus’ DNA. Cas9 is an RNA-DNA hybrid with a displaced strand of DNA inside the protein, which is formed by unwinding RNA-guided DNA. The role of this loop structure is currently unknown (Jiang et al., 2019). When the protein separates the sequence of nucleotides that it must cut from the DNA it checks that the DNA matches its RNA, if it does match then Cas starts to destroy the DNA by cutting it. If it does not match, then Cas closes its DNA loop that shows the displaced DNA strand and continues searching for its matching DNA (Doudna and Charpentier, 2014).

The CRISPR/Cas9 system was first developed in 2012 by Professor Doudna and researcher Charpentier (2016). They deciphered the defence system from the bacteria Streptococcus pyogenes.From this, they were able to create the ‘tracr-RNA-crRNA chimaera’ system in which they exchange the virus cr-RNA(CRISPR-RNA) with RNA of their choice. The tracr-RNA(Tracer-RNA) holds the cr-RNA in place in the Cas-9 protein, this complex is known as the g-RNA (guide RNA). The g-RNA also contains host DNA that is inserted into the inactivated gene cut by Cas-9. This g-RNA and host DNA complex is placed in the Cas-9 protein inside of the targeted cell, this will target any DNA identical to the host DNA inside of the g-RNA, therefore removing all traces of the host DNA inside the targeted cell, leaving gaps in the DNA which is sometimes mutated and repaired, or the g-RNA complex is inserted to fill the gap. Therefore, the alteration of any DNA sequences can now be easily edited (Manjunath, Dang, Yi and Shankar 2013). 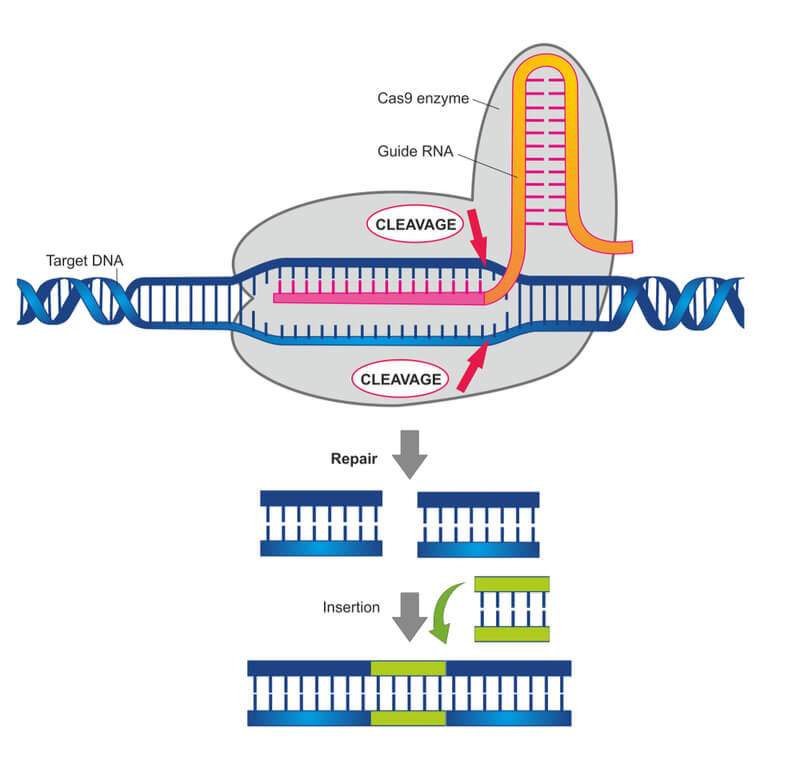 The ethical implications of gene editing are quite proportionate. In the field of transgenics crops are being modified to express a trait they normally wouldn’t express in its natural states such as heat or drought resistance such as the case of corn in Iowa, US, since corn doesn’t grow above 35c, which is the expected average temperature of Iowa in 2040 after global warming ,the seeds are being modified with heat resistant properties so they will grow at these temperatures, however these seeds will lack diversity and as a consequence, one mutated virus could eliminate all of them (“GMOs | Iowa Corn”, 2018). At the current rate of global warming should temperatures rise as expected, the need for genetically modified seeds for climate-adapted varieties are a must, however, the diversity of seeds needs to be increased as well (“Slate’s Use of Your Data”, 2018).

Gene editing techniques can also be used in Xenotransplantation, which is transplanting living tissues or organs from one species to another. Scientists can potentially grow hearts or other crucial organs using one’s own cells or incorporate an organ from a genetically engineered animal with similar sized organs as humans, such as a pig, into a human to reduce immunological and physiological incompatibilities (Mourad & Gianello, 2017). There are few ethical considerations to be considered for xenotransplantation such as the rights of the genetically engineered animals grown for their organs or tissues.

Gene editing can also be used in human embryos, it can be used to potentially eradicate all forms of genetic diseases and mutations, however, it can also be used to determine their traits when fully grown. Should a parent which for their child to be tall, fit and handsome a scientist could fulfil their wish. Philosophers worry that some may use this to create a ‘’super nation filled with genetically modified superhumans’’ this could create a species barrier within Homo sapiens potentially creating a new advanced species (Harari, 2016). Some argue that this is the next step in human evolution, whilst others refer to it as ‘playing God’ and is not within the rights of humans, moreover, the very first gene edited babies were born on November 2018 in China (Saey, 2018). With this an arms race of sorts between nations has started, Japan has already permitted gene editing in embryos and other countries are sure to follow.  Has the era of Homo sapiens come to an end? Is it time to accept that there is no future for Homo sapiens? (Harari, Purcell & Watzman, 2014). These are some of the questions being asked by philosophers. Pandora’s Box has been opened, and only time will tell what the consequences of this will be.