There is an ongoing crisis that is beginning to influence ecosystems throughout the world, which may lead to large scale natural disasters due to the rise in temperature from global warming. According to NASA’s Goddard Institute for Space studies, 0.8°C have increased around the world since 1880. In addition, the rise in temperature is pervasive and is increasing at a faster rate in the last two decades (SITE1). This warming phenomenon can disturb ecosystems and lead to extinction in extreme cases. Such ecosystems are dependent on plant growth and proliferation to sustain itself. Therefore, an experiment to observe the effects of a significant rise in temperature on pollen germination was conducted to predict the adaptability of Delopsperma cooperi, a common species of iceplant grown around the world, to this phenomenon .

T Delosperma cooperi (trailing iceplant) was compared to Tulbaghia violacea (society garlic) to obtain a broader view of how different plants from the same environment would react to a distinct change in temperature. An increase of 10°C was chosen as the variable to perform analysis with the Q10 temperature coefficient. Pollen is a fine powder that contains microgametophytes of seed plants and produces male gametes. When pollination occurs, the pollen grain germinates and a tube is produced as a conduit to transport the male gametes from the stigma to the pistils of the ovule in flowering plants (SITE2).  In nature, germination occurs when the stigma is hydrated from water sources (e.g. rain) . can also be induced in vitro using a germination media and the hanging drop method (SITE 3). Three replicates were observed the were analyzed with statistics to measure the significance of the variable (via a T-test, and Dixon Q).  The plant’s temperature dependence was quantified with the Q10 temperature coefficient. It was predicted that the increase in temperature would result in a significant improvement of pollen germination rate and longer pollen tubes than the control due to Delosperma cooperi’s adaptive traits (quote).

The hanging drop method consists of several steps.  A gasket was placed on top of the slide in order to create an area for the hanging drop to be intact with the cover slide and held together with grease. The slides were placed in the humidity chamber to allow germination and prevent drying. Two sets of the hanging drops were prepared, one for the higher temperature (37°C), and another for the positive control (27°C ). The negative control was prepared by observing the pollen without any germination media.

The germination elongation rates were recorded by sampling five pollen tubes from each slide in 30 minutes intervals, up to 150 minutes. This data was analyzed using biostatistics. A Dixon Q test was performed to identify and remove outliers. The Dixon Q test was calculated using the equation, Q= (gap)/(range). The gap refers to the absolute difference between the outlier and the closest number to the outlier and the range is simply between the smallest and largest values (CITE). After the elimination of outliers from the Dixon Q test, a student T-Test (with a 95% confidence interval) was performed to determine whether the variables were statistically significant in the difference of their elongation rates using P values (SITE). Finally, a Q10 value was determined from the mean of elongation rates. It was calculated by using the following equation: Q10 = (R2/R1)10/(T2-T1). Q10 is a unit-less measurement that quantify the change of a biological system due to temperature change.

The purpose of the experiment was to measure the elongation rates after every 30 minute interval, 32 points of data were obtained and analyzed. Overall, the elongation rate of Delosperma cooperifor the high temperature variable was as much as three times faster compared to the control temperature (0.686 µm/min vs. 0.278µm/min) in trial three.

The percent germination was also noticeably better for the high temperature variable versus the control, where it was approximately 60% compared to 20% after 120 minutes from initiation.

From the list of data, the Dixon Q-test result indicated the data point 0.780µm/min of the higher temperature control as an outlier with a 95% confidence level.

The mean elongation rate for the room temperature was 0.314µm/min and 0.454µ m/min for the higher temperature control.

The student T-Test yielded a P value of 0.0447, which indicates that the result is statistically significant at a 95% confidence interval.

The Q10 temperature coefficient for  Delosperma cooperi was calculated to be 3.59, categorized as a temperature dependent biological system. 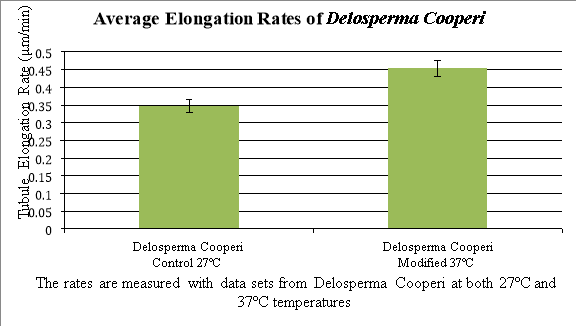 Figure 1. The graph shows the average elongation rates of Delosperma cooperi at two different temperatures. The tubule elongation rate was 0.314µm/min for the control and 0.454µm/min for the variable. Error bars denote one standard deviation (0.152µm/min and 0.177µm/min, respectively) above and below the mean. 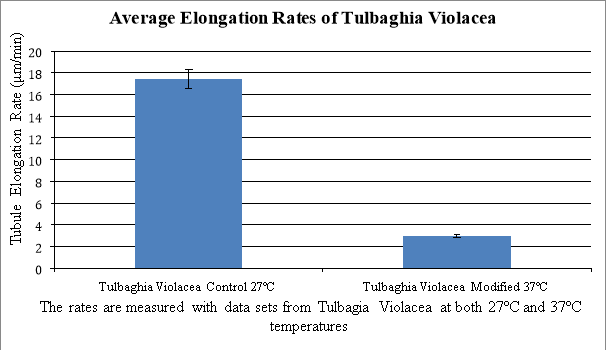 Figure 2. The graph shows the average elongation rates of Tulbaghia Violacea at two different temperatures. The tubule elongation rate was 17.4µm/min for the control and 3.00µm/min for the variable. Error bars denote one standard deviation (1.95µm/min and 0.279µm/min, respectively) above and below the mean.

The results appear to support the hypothesis, where Delosperma cooperi was positively affected by the increased temperature by approximately a 0.140µm/min and 40% germination improvement.

The result shows that the higher temperature yielded in an improvement in both percentage germination and pollen tube length growth at a significant level (P<0.05). The improvement in pollen tube elongation was interesting, with the highest rate observed 0.784 microns/minute, well above the average of the control. Statistical analysis supports this data, since the P-value via the student T-Test at the 95% confidence interval is lower than 0.05 and Q10 value is higher than 2. Q10 is a unit-less measurement that establish a temperature coefficient that correlates a system’s change to temperature difference (of 10°C) (SITE 4) In addition, the higher percentage germination was observed from the higher temperature control correspond to an article in which Delosperma cooperi is more adapted to a higher temperature environment due to increased metabolic rate under temperature stress (SITE 5).

A possible future experiment includes testing a greater variety of indigenous flower pollens under more temperature variances. The experiment provided a glimpse into how certain plants would respond to the consequences of global warming and more studies are needed for a more comprehensive overview.