Whey is soluble fraction of milk contain of various bioactive proteins, minerals and lactose that separated from casein throughout manufacturing of cheese or casein (Rock, 2010). Milk whey protein derived- component attribute the range of biological activity that influence digestion, metabolic response to absorbed nutrients, growth and development of specific organs and reduces the risk of chronic desease. Additionaly these protein peptides manifold, are manifested upon the proteolytic digestion which lead to bioactive peptides capable to strive specific biological activity such as antihypertensive, antimicrobial, antioxidant, immunomodulant or miniral (Yalcin, 2006; Hernandez-Leadsmen al., 2008; Madureira et al., 2010) . thes hydrolytic reaction must be strickly managed to produce hydroslysate with appropriate peptid profile for nutritional purposes. It s several aplicatication in specialty foods such as disinged to provide nutritional supportto individuals with particular physiological or nutritional needs not covered by conventional diets(Pacheco, Amaya-Farfan,Sgarbieri, 2002). Whey proteins complex of proteins including áµ¦- lactoglobulin(β-Lg ), α –lactalbunin (α-La), immunoglobulin ‘s(Igs), serum albumin and protease-peptone are soluble over a broad pH range (Multihull, 1992). Whey protein has processed in the three form ; whey protein concentrate(WPC) containing 35-85 percent protiens(Brans et al., 2004) ,whey protein isolate containing 90 percent and third is whey protein hydrolysate which processed from WPI or WPC WPH stands distinguished over WPI and WPC because of the peptides obtained with the specific physiological activity compared to the bioactivity of protein and its derived amino acids.

Whey protein isolate is of one category of whey protein which can be obtained during cheese manufacturing. It is manufactured by two processes namely cross flow microfiltration and ion exchange. The former process yields a higher protein quality than the latter because use of chemicals like sodium hydroxide and hydrochloric acid may cause denaturation of proteins present in whey. Hence whey protein isolate obtained through cross flow microfiltration was used to carry out the study. Proteolytic enzymes including pepsin and trypsin and DPPH (1,1-diphenyl-2-picrylhydrazyl) from Sigma-Aldrich and Bovine Serum Albumin, Methanol, Ferric chloride, Potassium ferricyanide, Trichloro Acetic acid, Sodium dodecyl sulphate, Mercaptoethanol, Tris-HCl, Coomassie Blue dye, Bromophenol blue dye from Himedia, India were purchased. All other chemicals were of analytical grade.

Degree of hydrolysis is defined as directly propotional to peptides formation by using digestive enzyme and calculated as per the given formula using a pH- stat method (Adler-Nissen, 1986)

Whey protein hydrolysate was carried out by hydrolyzing the whey protein isolate first by pepsin at its optimized pH, temperature and enzyme substrate ratio for the substrate concentration(See section-2.2) of 8 percent on the basis of protein content in whey protein isolate. During the complete digestion of pepsin till degree of hydrolysis became constant, the required pH was maintained using 2M Hcl and the aliquots was taken out half an hour once by inactivating the hydrolysis using 2M NaOH bringing the pH to 6.6 for the analysis of the analysis of reducing power. Hence the pepsin digests that determined to have the highest reducing power was further taken for the subsequent 0 hr,30 minutes,1 hr,1.30 hr,2.30 hr digestion at optimized pH , temperature and enzyme substrate ratio till the degree of hydrolysis became constant. Aliquots of this subsequent digests were taken out by inactivating the hydrolysis using 2M Na2Co3 till the pH became 11 for the analysis of the subsequent digest having the highest reducing power.

A method devised by Oyaizu (1986) for reducing power was followed with modifications. To 2.5 ml of the sample solution, 2.5ml of sodium phosphate buffer (0.2M, 6.6pH) was added, followed by the addition of 2.5ml of 1% potassium ferricyanide. The reaction mixture was then incubated at 50ºC in water bath for 20 minutes. It was cooled to 20ºC and then 2.5ml of 10% Trichloro Acetic acid was added to terminate the reaction. The mixture was centrifuged at 3000 rpm for 10 minutes. 0.1 ml of the supernatant was made up to 2.5 ml with distilled water and added with 1ml of 1% Ferric Chloride. The colour developed was read at 700 nm after 5 minutes reaction.

Whey protein hydrolysate was analysed for protein content according to Bradford method. 0.1 ml of the sample of whey protein hydrolysate and whey protein isolate was made up to 1ml using phosphate buffer saline (pH 7.4) was added with diluted dye solution (1:4) prepared by dissolving 100mg of Coomassie brilliant blue G250 in 50ml of 95% ethanol followed by the addition of addition of 100ml of conc. Phosphoric acid making up the solution to a final volume of 200ml with distilled water. Standard curve was made for bovine serum albumin in the concentration ranging from 0.1mg to 1mg/ml.

SDS-PAGE was run with o.3gml stacking and 0.25 gml separating acryl amide gel to identify amino acid composition of whey protein hydrosylate in oder to molecular weight of fraction. The SDS-page sample was prepared by β-marcaptoethnol to prevent the cross linking of disulphide bond during the sample preparation. A 30 µg aliquot added to 1 mg/ml of protein loaded to each well.

Whey protein isolate at the substrate concentration of 8 per cent on protein content basis was enzymatically hydrolysed using pepsin at pH 1.5, temperature of 37°C and E/S ratio of 1:100 for 3 hours of complete digestion followed by trypsin digestion by bringing the pH of pepsin digests to 9, temperature at 42°C the E/S ratio of 1:100 for 6 hours of complete digestion. After digestion, the digests was inactivated by bringing the digests to the pH of 10.10 using 2M Na2Co3. While digestion was going on, the required pH was maintained using 2M Hcl and 2M NaoH. For further analysis of reducing power and protein estimation, the aliquots of digests was taken out half an hour once till the complete digestion and stored at refrigerator conditions after inactivation of the enzyme in digest mixture. Similar to the present study the invitro digestion of WPI by pepsin at pH, temperature 1.5, 37°C and E/S ratio of 1:100 was carried out to study the immune enhancing ability of WPH (.Gauthier et al, 2006) 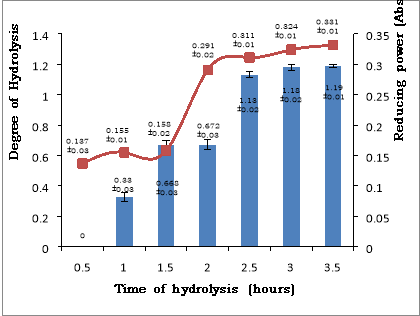 3.3.4 Sequential hydrolysis by pepsin and trpsin: 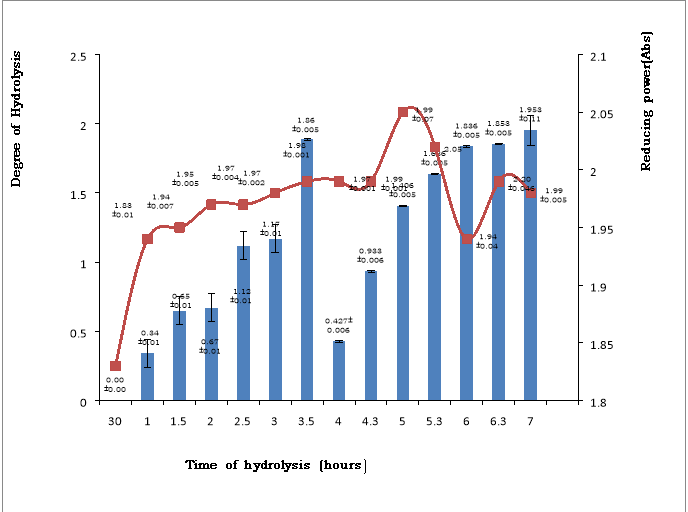 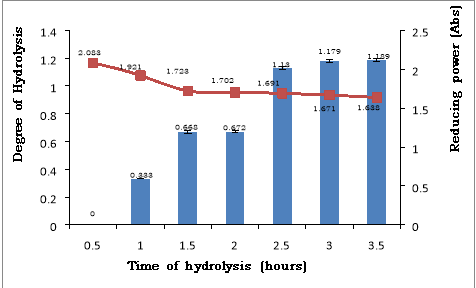 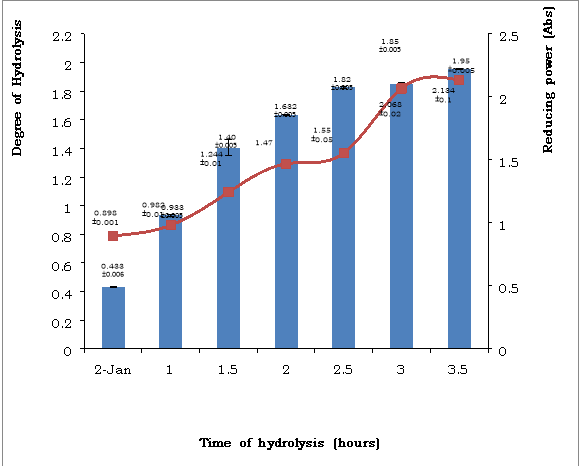