Hyaluronic acid (HA), also known as hyaluronan, is a naturally occurring biodegradable mucopolysaccharide that is found in mammals, bacteria, and most types of organisms. Hyaluronic acid has many biological functions, such as influence of cell differentiation and proliferation, regulation of cell adhesion and motility, as well as giving tissues various biochemical properties. HA also has many cell surface receptors (CD44, ICAM-1, RHAMM) that allow it to effect multiple cellular processes, some examples being morphogenesis, metastasis, wound repair, and inflammation. Hyaluronan is a key element in the extracellular matrix and pericellular matrix of vertebrate tissues, but can also occur intracellularly. HA is present in nearly all body fluids and tissues, but mainly in: connective tissue, synovial fluid of the joints, virtuous humor of the eye, in the combs of chickens, and highly in the umbilical cord. The concentration varies and is shown in table 1. 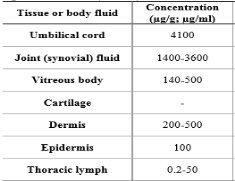 Table 1: Examples of HA in the body

HA is an unbranched non-sulfated glycosaminoglycan made up of repeating disaccharides, the two sugars being uronic acid and N-acetylglucosamine. Thousands of these disaccharides combined together make up the HA backbone. In solution Hyaluronic acid forms into a polyanion that can crosslink with its self and also has a high affinity to bind with water which gives it high viscous properties. With its viscous consistency, hydrophilicity, and biocompatibility HA is used currently in cosmetic dermatology, osteoarthritis treatments, and ophthalmology. It is also being tested as a promising drug delivery agent through various routes of the body, such as pulmonary, nasal, ophthalmic, parenteral, and topical.

Hyaluronic acid was discovered in 1934 by Karl Meyer and John Palmer by isolating an unknown chemical substance from the vitreous humor of a bovine’s eye. This unknown chemical they found was composed of two sugar molecules, with one being uronic acid. The name comes from “hyalos” the Greek word for glass and uronic acid hence the name hyaluronic acid. It was later used commercially in 1942 by Endre Balazs who patented its use as substitution for egg whites in baked goods. It wasn’t medically used until the late 1950’s by optometrist as a vitreous humor replacement during eye surgeries. They obtained this hyaluronan from human umbilical cords and from the combs of roosters. The chemical structure of HA was resolved in the 1950’s by Karl Mayer and his research team first as an acid but under natural physiological conditions they found salt like behaviors in the form of sodium hyaluronate. It was not until around 1990 that the physiochemical structural properties and its uses in the body for drug delivery were studied by multiple labs throughout the country, and it is still being looked into today.

Hyaluronic acid is constructed of a very energetically stable disaccharide that is composed of a D-Glucuronic acid and N-acetylglucosamine bound together through alternating beta-1,4 and beta-1,3 glycosidic bonds. These individual disaccharides bind together to create a helical chain structure of varying length and molecular weight varying from 10 kDa to 1000 kDa and measuring up to 10 nm in length. With such versatile molecular weights comes different viscoelastic properties and uses in pharmacology.

The HA polymer chain expands into a random coil when made in solution and displays unique rheological properties such as being extremely hydrophilic, as well as very lubricious. These unusual properties can possibly be explained by crosslinking of these hyaluronan polymer chains even at very low concentrations. At higher concentrations and molecular weights, solutions form into very viscous jellies and hydrogels. Hydrogels are pseudo-plastic materials that have very high shear-dependent properties, with the solution being a gel in normal conditions but when applied under pressure flows easily, which makes HA in solution a very ideal lubricant. Also Hyaluronic acid forms into a linear polyanion in solution, which stiffens the helical formation, allows the chains to self-associate, and gives HA its hydrophilic properties. Allowing it to trap up to 1000 times its own weight in water.

Hyaluronan plays many structural tasks throughout the extracellular matrix by non-specific and specific interactions. It has a stabilizing effect when bound to proteins, and is important in cellular signaling transduction with specific molecules and receptors. Some examples of receptors and molecules are; versican, aggrecan, neurocan, CD44, RHAMM, GHAp, LYVE-1, and TSG6. But the primary receptor from current research is CD44, due to its multifunctional cell surface glycoprotein that can be observed on many cell types. HA is also important in gene expression of endothelial cells, eosinophils, macrophages, and some epithelial cells. Only low molecular weight Ha particles have a role in gene expression, varying in size from 20 kDa to 450 kDa. In addition to gene expression HA is also important in healing and scar formation. When higher molecular weight molecules were present in a healing wound less scarring tissue was observed than a wound in the presence of lower molecular weight HA. These results show how molecular weight is significant in the effectiveness of the healing process and scaring. It has also been found that High molecular weight HA supports tissue integrity, and small HA fragments initiate an inflammatory response during an injury.

Hyaluronic acid is glycosaminoglycan which are most commonly synthesized in the cells Golgi body and secreted by keratinocytes, fibroblasts, or chondrocytes. The integral membrane proteins that synthesize HA are HAS1, HAS2, and HAS3(). With HAS standing for hyaluronan synthase. These enzymes synthesize long, linear polymers composed of repeating disaccharides components. The mechanism of HAS involves chain extension by adding alternating monosaccharides of Glucuronic acid and N-acetylglucosamine until the desired length is met and can reach up to 10,000 repeating disaccharides with a molecular weight of 4 million Daltons(). In skin tissue and cartilage HA makes up a large percentage of the tissue mass, and so the synthesis in these locations is very high.

The degradation of Hyaluronan is mediated by three types of enzymes in mammals: Hyaluronidase, b-D-glucuronidase, and beta-N-acetyl-hexosaminidase. Hyaluronidase breaks down larger sized HA molecules into smaller fragments, whereas the other two enzymes cleave the HA fragments by taking away nonreducing terminal sugars or removing single monosaccharides from the HA backbone(). Degradation can also occur in non-enzymatic reactions. Some examples are shear stress or thermal mechanisms, but can be additionally be broken down by chemical reactions such as hydrolysis and degrading oxidants. Hyaluronan can also be degraded by ultrasonication as it applies shear stress in a non-random way(). Research shows that higher molecular weight chains degrade slower by ultrasonication than smaller length Ha Chains. In addition, as temperature rise, stress on HA chains cause degradation and decreased viscosity as a function of temperature(). Hydrolysis of HA can happen as well in a random process but often breaking down larger chains into disaccharide fragments. Lastly, Reactive oxygen species can be produced by a cell from aerobic respiration. Some examples that degrade HA chains are hydroxyl radicals, aerobic respiration, and hypochloride.