* Ministry of Science and Technology, Animal and Fish Research Center

In histopathological evaluation, tissue samples are fixed, processed, embedded, and sectioned before being stained. Fixation is the foundation step behind the study of pathology. Routine testicular tissue fixation in 10% formalin solution leads to sever shrinkage which obscures most of the morphological details. The aim of this study was to evaluate the morphological and structural alteration as well as the quantitative variations in size of the seminiferous tubule of mice testes that occur after fixation in either 10% formalin solution or Bouin’s solution. The quantitative variations in size of the seminiferous tubule of the testes were performed using Motic image plus version 2.0 ml image analysis system. The quantitative parameters included both area and diameter of equivalent circle (D-Circle). Data showed that the type of the fixative solution affected only on the morphological and structural details of the testicular tissue but there were no significant differences in the quantitative parameters. This study concluded that the testicular tissue fixation with bouin’s solution can be used for better morphological and structural details and the data can be combined with data collected from samples fixed with 10% formaline solution for the histomorphological measurements.

The safety of the drugs and industrial chemicals is routinely evaluated in studies using laboratory animals. Some of these studies include the histopathologic evaluation of tissues (1). Histological samples are fixed, processed, embedded, and sectioned before being stained, and all of these steps can enhance, or detract, from the final outcome of the stain quality (2). Fixation is the foundation step behind the study of pathology and essentially exists to prevent the autolysis and degradation of the tissue and tissue components such that they can be observed both anatomically and microscopically following sectioning (3).

Commonly, the fixative used in that histopathologic evaluation is 10% formalin. This fixative provides a well fixation and resolution for most tissues, but cellular shrinkage is a problem in the testis, and much of the cellular detail is obscured. The testes are paired ovoid organs that lie within the secrotum. Each testis is divided into approximately 250 lobules by incomplete connective tissue septa. Each lobule of the testis consists of one to four seminiferous tubules in which sperm are produced and a connective tissue stroma in which leydig, or interstitial, cells are contained (4). This study was performed to evaluate the microscopic detail and the morphometric changes that occur in the seminiferous tubules of the testis after fixation in either 10% formalin solution or Bouin’s solution. The morphometric measurement was done by using (Motic Image Plus V2) computer software.

Bouin’s solution and 10% formalin fixatives were formulated to standard composition (5). Healthy mature fertile male mice of Mus Musculus between 8-12 weeks old and 30-35 gm of weight were used for the experiments. These mice were obtained from the Animal House at the National Center for Drug Control and Research / Ministry of Health. These animals were scarified by cervical dislocation. Then, they fixed on the dissecting table and the abdomen was incised transversely opened and finally the testes were carefully dissected. The tunica was punctured in 4 places with a 16-gauge needle before the testes was placed in the fixative. For each animal, one testis was fixed in bouin solution and the other was fixed in 10% formalin for 24 hours. Tissues samples in Bouin’s solution were rinsed in 50% ethanol until clear. Tissue samples were then dehydrated through graded ethanol alcohols (50% 1Ã-, 70% 1Ã-, 90% 1Ã-, 95% 1Ã-, 100% 2Ã-) and xylene, and then embedded in paraffin to obtain tissue blocks. Specimen blocks were then trimmed and sectioned, and 4-Î¼m sections were obtained with the use of a MRS 3500 Microtome (Histo-Line, Italy). Sections were then placed on glass slides and stained with haematoxilin and eosin.

The diameter of equivalent circle (D-Circle), which is a method used to measure the diameter of the irregular shapes, was measured in mm by using statistical equation (6): 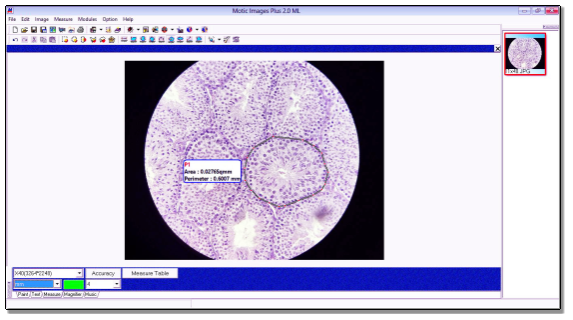 Two types of fixatives were used for the fixation of the testicular tissue. Paraffin sections of testes stained with H&E showed morphological and structural alteration in seminiferous tubule component (spermatogonia, spermatocyte, spermatid and supporting Sertoli cells), as well as in the interstitial tissue cells (Leydig cells) differ according to the type of the fixative.

The tissue samples fixed with the bouin’s solution showed well-preserved testicular cords. There were no spaces between the Leydig cells and the seminiferous tubules, showing that there was minimal tubular shrinkage. In addition to that, the germinal epithelial cells appeared to be well arranged and there were no spaces in between these cells (Figure: 2). Bouin’s fixed tissue sections showing better acrosomal resolution than 10% formalin fixed tissue sections. In addition to that, the clarity of cellular details and the nucleus in the cells of the interstitial tissue (Leydig cells) and the germinal epithelium cells was far better than with the 10% formalin (Figure: 3). 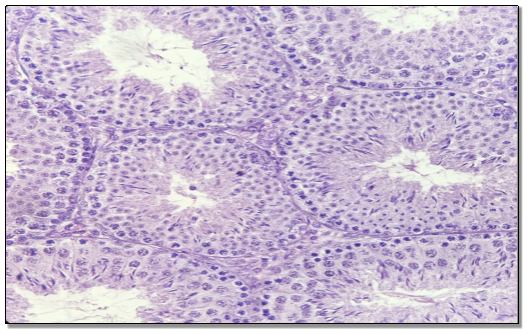 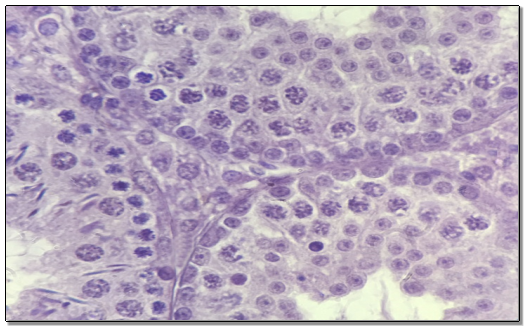 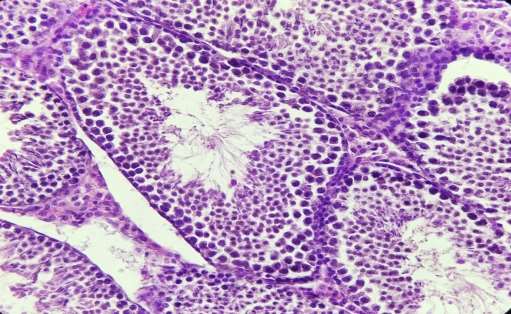 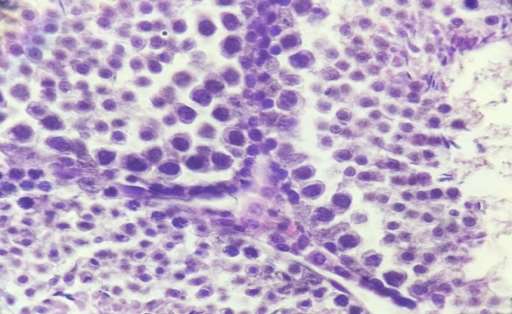 The results of the morphometric measurement illustrated in the Table 1 and 2. The statistical analysis showed no significant differences [P-value (T-Test) > 0.05] in these two parameters between the mentioned groups.

In the present study, histological paraffin sections showed certain morphological and histological changes that happened after fixation and these changes differ according to the type of the fixative.

Fixation of testis in formalin is the common method of tissue processing in many routine histopathological studies. Formalin acts to cross-link and, thus, stabilize, a wide range of cellular molecules including nuclear proteins and nucleic acids (7-9). A major concern in fixation by formalin is the amount of distortion produced by fixation. The usual term applied to fixation distortion is tissue shrinkage (10, 11). Testicular tissue fixation with 10% formalin solution results in chromatin aggregation and severe shrinkage of the germinal and Sertoli cells (12). It’s also known that formalin cause condensation of cytoplasm due to its hyperosmocity and probable effects of formalin on the proteins in the plasma membrane (13). In contrast to formalin fixative, only minimal condensation of cellular cytoplasm was present in interstitial cells in testes fixed in Bouin’s fluid. Bouin’s solution contains picric acid and glacial acetic acid in addition to formalin. This mixture of three ingredients (picric acid by coagulation and formalin by cross linking representing two different types of protein fixation, and acetic acid for penetration enhancement) has the advantage of penetrating into the tissue more rapidly and evenly, and is less damaging to the conformation of proteins than formaldehyde alone, thus guaranteeing excellent tissue structure and avoiding tissue shrinkage that already happen during the fixation step (14-16).

In bouin’s-fixed testes the clarity of cellular detail in the cells of the interstitial tissue (Leydig cells), Sertoli cells and the germinal epithelium cells were far better than with the 10% formalin. The formalin fixative reduces the quantity of cationic amino groups available for binding with stain. For example, the reaction of formaldehyde with amino group in tissue can interfere with the binding of eosin to the tissue since eosin binds to these amino groups in tissues (17).

Histomorphological measurements are often required to quantify tissue changes caused by disease. In the present study, we did not observe a significant change in the quantitative variations in both area and the D-Circle diameter between the formalin and bouin’s solution fixed tissue samples. These results do not agree with Kleinteich B and Schickedanz H. (1977) (18) which indicated that the measuring values of the diameter of the seminiferous tubules of rat testes fixed in Bouin’s solution were largest from those fixed in either Carnoy’s solution or in 10% formalin solution. We concluded that the testicular tissue fixation with bouin’s solution can be used for better morphological and structural details and the data can be combined with data collected from samples fixed with formaldehyde for the histomorphological measurements.

2- Nancy W. Troiano, Wendy A. Ciovacco, and Melissa A. Kacena. The Effects of Fixation and Dehydration on the Histological Quality of Undecalcified Murine Bone Specimens Embedded in Methylmethacrylate. J Histotechnol. 2009; 32(1): 27-31.

10. Dam AN: Shrinkage of the brain during histological procedures with fixation in formaldehyde solutions of different concentrations. Hirnforschrift 20:115, 1979.

18- Kleinteich, B., & Schickedanz, H. Effect of the fixation of biopsy specimens from rat testicles on the results of morphometric studies]. Zeitschrift fuÌˆr Urologie und Nephrologie. 1977; 70 (9): 663-8.