A HISTOLOGICAL STUDY OF HEPATOPROTECTIVE EFFECT OF POMEGRANATE, IN MINOCYCLINE TREATED GUINEA PIGS

Objective: To determine the hepatoprotective effects of pomegranate on drug induced autoimmune hepatitis produced by minocycline.

Material and Method: This experimental study was conducted in the department of anatomy, basic medical sciences institute, Jinnah post-graduate medical centre, Karachi. 30 adult male guinea pigs taken and divided in three groups, A, B and C, respectively with each group having 10 animals, Group A served as control, Group B was treated with minocycline 0.02mg/Gram body weight and Group C was given the minocycline along with pomegranate in the dose of 0.9 mg/ Gram body weight. On the completion of study, the animals were sacrificed and liver were removed for the histological examination under light microscopy in haematoxylin & eosin staining.

Conclusion: Use of pomegranate with minocycline can prevent hepatic damage particularly the autoimmune hepatitis.

Drugs are the most common cause of liver injury. More than 900 drugs toxins and herbs have been reported to cause liver injury.1 Drug induced autoimmune hepatitis (DIAH) has been reported to be caused by several drugs.2 Autoimmune hepatitis is a chronic inflammatory disease of the liver.3 marked by prominent infiltration of inflammatory cells.4it is an acute and potentially severe side effect, particularly often reported after the long term use of minocycline.5 A significant proportion of patients with autoimmune hepatitis have drug induced hepatitis, mainly because of this drug.6 Minocycline, a semi synthetic, broad spectrum antimicrobial tetracycline available since 1972 is widely prescribed as systemic antibiotic for acne vulgaris which is given for a prolonged period ( month to years).6 Foods rich in natural antioxidants have been proposed as a tool to prevent and cure liver damage.7 The pomegranate is one of the important dietary sources, that exhibits strong anti oxidant and anti-inflammatory properties.8 Its main constitute, ellagic acid, have been proven to antagonize in vitro to inhibit the pro-inflammatory mechanisms.9

This experimental study was conducted for 8 weeks by taking 30 adult male guinea pigs of 450-650 weight at animal house of BMSI, JPMC, Karachi and divided them into three main groups i.e., A,B and C that comprises 10 animals each and receiving standard laboratory diet ad labitum. Group A served as control, group B was given minocycline 0.02 mg /G body weight / day orally based on human consumption for the duration of one year, while group C was given minocycline in the same dose along with pomegranate 0.9 mg /G body weight /day orally. At the end of the experimental period, all the animals were sacrificed under ether anesthesia and liver was removed to be fixed in 10% formalin for 24-48 hours. The tissue samples taken from the organ were then dehydrated in ascending strength of alcohol, cleared in xylene, infiltrated and embedded in paraffin wax. Tissue blocks were made and 4-5 μm thick sections were obtained by cutting them with microtome. The sections then mounted on glass slides and were stained with haematoxylin and eosin. The morphological changes in normal architecture of liver lobule were observed under light microscope with the help of 8X ocular, 40X objectives and graded according to the infiltration of inflammatory cells within the three zones of hepatic lobule 8. The grading was done as follows:

Grade I (mild M+) : infiltration of inflammatory cells within zone I

The present study was design to observe the minocycline treated animal and pomegranate protected animal in guinea pigs. Observations and results of microscopic examination were compared with control animal.

The microscopic examination of pomegranate and minocycline treated group C animals showed the architecture of hepatic lobule in comparison to control group A that is less distorted of hepatic cords and less dilated central vein, while infiltration of inflammatory cells is markedly decreased and limited to zone I when compared to group B animals

The histological examination of hepatic lobules in haemotoxylin and eosin stained sections of control group A showed normal architecture as described by Young et al.10,11

Group C animals treated with pomegranate and minocycline simultaneously demonstrate the protective effects on hepatic architecture. The hepatic cords showed regular arrangement of and the hepatocytes were normal in shape, while the hepatic lobules showed less accumulation of inflammatory cells when compared to Group B animals. This is in accordance with the study of Novarro et al. who proved that after the treatment of pomegranate in hepatoma the pattern of distorted hepatic cords become normal.14 This is also in concurrence with the study of Middha et al. who concluded that utilization of pomegranate, ultimately improve the hepatic architecture by providing the protection against oxidative damage.15

From the results of this study, it can be concluded that pomegranate has proved to be highly effective in preventing the hepatic damage produced by minocycline particularly minocycline induced autoimmune hepatitis. So use of pomegranate should be promoted in daily life, particularly in those patients who are on long term minocycline treatment. 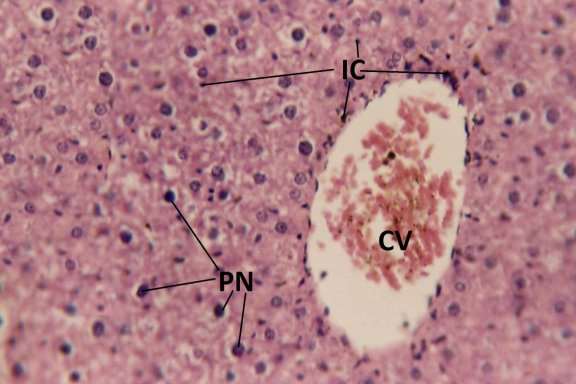 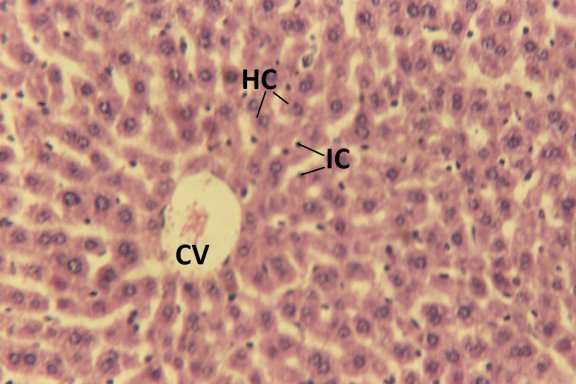