Heart- and neural crest derivatives-expressed protein 2 is a protein that in humans is encoded by the HAND2 gene. HAND2 (also known as dHAND) is a 24 kDa, class B member of the basic helix-loop-helix transcription factors superfamily. This gene product is one of two closely related family members, the HAND proteins, which are asymmetrically expressed in the developing ventricular chambers and play an essential role in cardiac morphogenesis. HAND2 is essential for cardiac morphogenesis and required for vascular development and regulation of angiogenesis, possibly through VEGF signaling. HAND2 is also implicated in limb development acting as an upstream regulator of sonic hedgehog. Human and mouse HAND2 proteins are 100% identical.

HAND2 is one of the earliest cardiac chamber-specific transcription factors identified to date. Mice homozygous for a null allele of Hand2 die from heart failure by 11 dpc. Heart defects in the null embryos include lack of aortic arch arteries, a dilated aortic sac, and an abrupt connection between the outflow tract and the left ventricle, due to the absence of the right ventricle (Srivastava, D., et al. 1997).

The mouse Hand2 (Ensembl Gene Model ID: ENSMUSG00000038193) locates at the forward strand of Chromosome 8, from 57320983 bp to 57324517 bp. The Hand2 only has one basic helix-loop-helix domain. The domain includes amino acids from 99 to 151, referred to the ProtParam tool on the ExPASy Proteomics Server (http://www.expasy.ch/tools/protparam.html, ID: Q61039). Sequence from 1 to 15535 with labeled exons and translated polypeptide is listed in Appendix A.

Since the whole length of Hand2 is 3534bp, and it has only one domain in Exon 1, so considering which part is going to be knocked out is very apparent. In my construct, Exon1 is flanked by two loxP sites, which will be deleted by expression of Cre recombinase. Considering that there is only one Intron between Exon1 to Exon2, the 2nd neo cassette amplified from pl451 would be inserted into the Intron. To construct the mini-targeting vector, I will ligate an about 200~300 bp homologous arms PCR amplified from Hand2 genome with certain restriction enzymes digested pl452 or pl451 which contains the neo cassette (Liu et al., 2003). Primers for this method are designated Primer E & F, G & H, I & J, and K & L. See in next section and Appendix B for detail. It should be noticed that all the restriction sites incorporated into the primers should be determined after choosing proper restriction sites for Southern blot assay in next step.

Next is to determine the restriction enzymes used in the Southern blot assay to identify correctly targeting. It should be considered prior to determining the exact retrieve homologous arms positions; otherwise there might be no proper restriction sites outside of the retrieve homologous arms. The restriction sites used in the future Southern blot assay should appear outside of the retrieve homologous arms and near inserted loxP sites incorporated into the PCR product when amplify the neo cassettes from pl452 or pl451, and what is more important, not appear between the two positions. The 1st neo cassette will be inserted in front of Exon1, so the restriction sites appear in Exon 1 cannot be chosen for Southern blot assay at least. As soon as the positions the two loxP sites that will be inserted into and as the restriction enzymes used in the future Southern blot assay are determined, the retrieve homologous arms can be found out directly. The repeat sequences that probably appear at these regions can be identified from RepeatMasker (http://www.repeatmasker.org/cgi-bin/WEBRepeatMasker). So it is not necessary to worry about the probe as the results show that there are really regions without repeat sequences both in the 5’ and 3’ terminal. The two pairs of primes are designated Ret_Left_Forward & Ret_Left_Reverse and Ret_Right_Forward & Ret_Right_Reverse, respectively, in addition, proper restriction sites should be incorporated into the primers for directional cloning of the PCR product into pl253 (see detail in the next section and Appendix B).

I Construct the Retrieve Vector

For either of the two homologous arms, it should be linked into pMD™ 18-T Simple Vector (TaKaRa Code: D103A) for amplifying and sequencing after PCR. pMD™ 18-T Simple Vector has no multiple cloning site, and would allow cutting the linked product by Not I & Hind III, or Hind III and Spe I without worrying about some unspecific fragments. This is followed by double digestion and gel purification, and then the two ~500 bp homologous arms, along with digested pl253, will be linked together at the restriction sites: Not I, Hind III, and Spe I. The vector has then been completed and will be linearized by Hind III for retrieving (A flow chart of the main steps in this construct is shown in Figure 1). 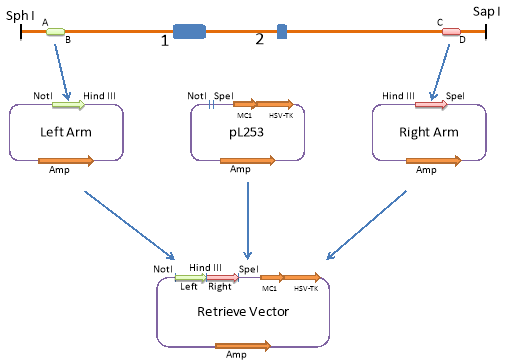 II Construct the mini-vector to target the 1st neo cassette

The mini-vector refers to the one used for inserting the neo cassette into retrieved vector pL253. I’d like to construct the mini-targeting vectorby linking the digested PL452 with the 200~300 bp homologous arms amplified from whole genome (Liu et al., 2003). Designing this vector should consider 1) where to insert, this will determine the primers for amplification of the 200~300 bp homologous arms in recombination and is dependent on the consideration that inserting the loxP site in the chromosome won’t change the correctly splicing of pre-mRNA; 2) which restriction sites to be included, and this will determine the exact fragment digested from pl452. Proper restriction sites have been discussed above, and a Sal I site should be included. There is a native Sal I site locating at 2670 bp of pl452, just at the upstream of the 1st loxP site in the neo cassette, so neo popping-out won’t delete the site, and this allows the identification of correct targeting of the left homologous arms in ES cells’ recombination.

Primer E & F (pL452_Left_Forward & pL452_Left_Reverse) are designed for amplification of the left 233 bp homologous arms in the mini-targeting vector, while Primer G & H (pL452_Right_Forward & pL452_Right_Reverse) are for the right 232 bp. EcoR I and BamH I sites are incorporated into primer F and G which allows the ligation of the digested neo cassette into the middle of the two homologous arms. Sal I and Not I sites are incorporated into primer E and I, respectively, permitting directional cloning of the homologous arms and neo cassette into pl253. In the method, the position of the loxP site inserted in 830 bp upstream to where Exon 1 begins. Schematic views of constructing this vector are shown in Figure 2. 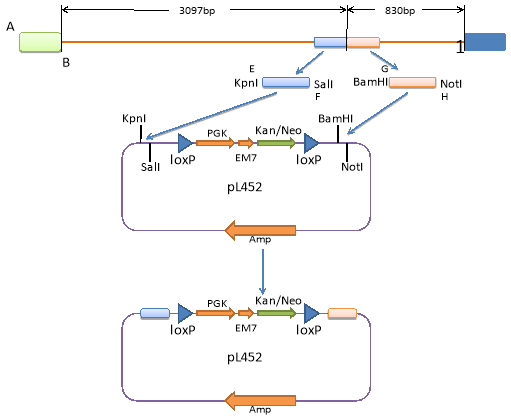 III Construct the mini-vector to target the 2nd neo cassette

Principles and considerations of constructing this targeting vector are similar to constructing the 1st one. The position of the loxP site inserted in is almost the center between Exon 1-2, 717 bp upstream to where Exon 2 begins, a brief view is shown Figure3, similar to Figure 2. 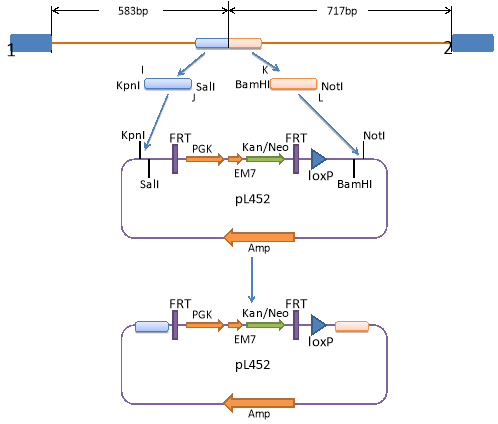 The main part of constructing the conditional knock out targeting vector is constructing the three mini vectors that are discussed above. The following procedures are just three steps of homologous recombination, as well as the 1st neo popping-out and plasmids purification. Homologous recombination has to take place in EL350 or EL250. EL350 contains an introduced a cre-gene under the control of the Arabinose-inducible promoter, PBAD, while EL250 contains an Flpe gene under the same promoter, in addition to the exo, bet, gam which encode proteins that are required for or assist in recombination (Liu et al., 2003). Thus, the 1st neo popping-out has to be accomplished in EL350, following an induction for Cre expression by prior growth in Arabinose-containing media for 1 hour at 32 ºC. After this step, the vector should be transferred to EL250. A schematic procedure of these steps of homologous recombination and neo popping-out, as well as predicted digestion graph is shown in Figure 4. 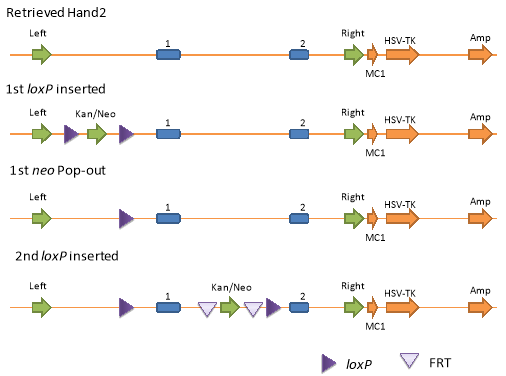 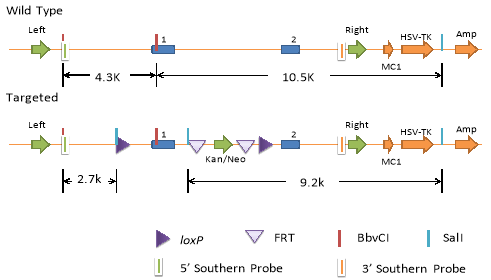