Glycerol, a simple alcohol which contains three hydroxyl group. Glycerol is also known as glycerine or 1,2,3-Propanetriol. Glycerol has many uses in pharmaceutical, food, paint, cosmetic industries. Glycerol can be used additional fuel in boilers due to its high calorific value. The physiochemical properties and chemical composition of glycerol varies from other fuels.

Glycerol is a odourless, colourless, viscous liquid with sweet taste. Glycerol contains three hydrophilic hydroxyl groups which is responsible for its solubility in water. Glycerol has a melting point of 17.9 oC and boiling point of 290 oC. Molecular formula of glycerol is CH2OH-CHOH-CH2OH. Glycerol can be transformed to various value added chemicals such as dihydroxyacetone, succinic acid, citric acid, ethanol, hydrogen etc., Until now the fermentative metabolism of glycerol was being reported in species of bacteria like Citrobacter sp, Enterobacter sp, Lactobacillus sp, Propionibacterium sp, Clostridium and many fungi species.

The production of glycerol in the laboratory is possible by yeast Candida magnoliae and osmotolerant yeast Candida glycerinogenes. Using genetic information, there are new possibilities in the field of fermentation and metabolic engineering. The Overexpression or blocking of genes could potentially can increase yield or productivity. Triose phosphate isomerase is an important enzyme in glycolytic pathway that directs dihydroxyacetone phosphate to glyceraldehyde 3-phosphate. When this triose phosphate isomerase gene was deleted, the mutant is able to achieve higher yield of glycerol. Overexpression of GPD1 gene in yeast increases glycerol production simultaneously increases the accumulation of byproducts such as succinate, acetate, pyruvate etc.,

This work briefs about the comparison of glycerol production in Candida magnoliae and Candida glycerinogenes. For the design of fermentation process, culture media optimization is an essential step. Many parameters such as phosphate, sulfate, temperature and pH have been found to affect the productivity of glycerol by these microorganisms. Hence these were optimized in prior to other parameters.

Fermentations were carried out in 250 ml shake flasks with a working volume of 50 ml. To the working medium 5% (v/v) of C. glycerinogenes and C. magnoliae were inoculated in different flasks. Flask for C. glycerinogenes was incubated at 31 oC and flask for C. magnoliae was incubated at 30 oC for 48 hours. Magnetically stirred 3-l fermentor was used for fermentation with working volume of 1-l. The medium was agitated at 500 rpm and aerated at 2.0 l/min.

Candida magnoliae was isolated from honey comb. C. magnoliae can utilize glucose as a carbon source for growth. It strongly ferments glucose to glycerol. This yeast is able to grow in YM medium containing glucose, yeast extract, malt extract and peptone. C. glycerinogenes was isolated from natural environment of high osmotic pressure. Glucose can be used as carbon source by this organism for glycerol production.

Table 1 Effect of different concentration of sulfate on glycerol productivity 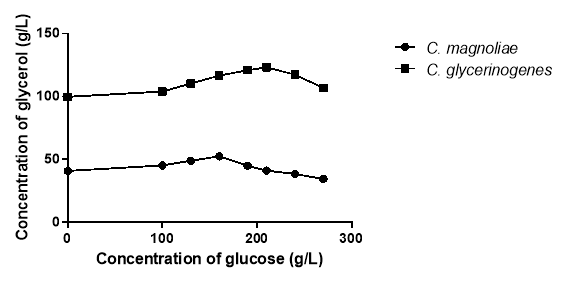 Fig. 1 Effect of initial concentration of glucose in the medium on the production of glycerol by C.magnoliae and C. glycerinogenes based on the amount of glucose consumed.

Table 2 Effect of different concentration of phosphate on glycerol productivity 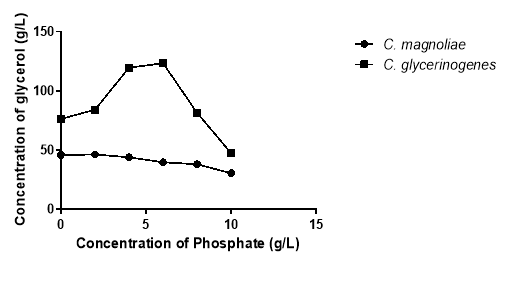 Fig. 2 Effect of initial concentration of phosphate on the production of glycerol in the medium by C.magnoliae and C. glycerinogenes based on the amount of consumed glucose.

Effect of Temperature on glycerol production 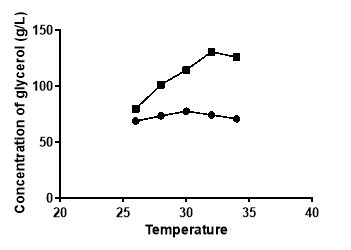 Fig. 3 The temperature significantly affected the production of glycerol by â- C.magnoliae and â-  C.glycerinogenes based on the amount of glucose consumed.

Effect of pH on glycerol production 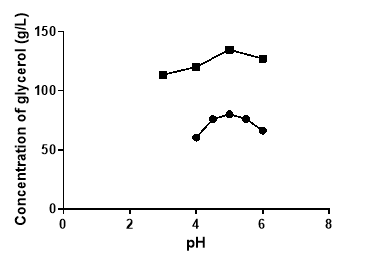 Fig. 4 Effect of initial pH of medium on production of glycerol by â- C. magnoliae and â-  C. glycerinogenes based on the amount of glucose consumed.