The activity-based fractionation of coffee solutions by a series of chromatography techniques led to the isolation of an active compound I which exhibited a strong inhibitory activity against α-glucosidase. The structure of compound I was established as norharman (9H-pyrido[3.4-b]indole) on the basis of HR-FAB-MS, 1H NMR, 13C NMR and 1H-1H COSY spectra. Compound I potently inhibited α-glucosidase in a concentration dependent manner but it did not exhibit any significant activity against other glycosidases. A Lineweaver-Burk plot revealed that its inhibition mode of enzyme was uncompetitive with a Ki value of 0.13 mM.

Coffee is the most commonly consumed beverages in the world and the health benefits of coffee consumption have been extensively studied [10]: coffee has strong antioxidant properties in vivo [16, 18] and also reduces the risk of Parkinson’s [11] and Alzheimer’s diseases [4]. Recent studies have demonstrated that habitual coffee consumption is related to a significantly lower risk of type 2 diabetes [17, 19], but it remains unclear what mechanisms and what coffee constituents are responsible for the observed association. Animal and in vitro studies have suggested several plausible mechanisms for a beneficial effect of coffee on glucose metabolism: increase in insulin sensitivity [14], inhibition of glucose 6-phosphatase [2], an increase of glucagon-like peptide I concentration [15], and decreases the rate of intestinal absorption of glucose [12].

The α-glucosidase is essential for carbohydrate digestion because carbohydrates must be degraded enzymatically in the intestine before they can be absorbed. The inhibition of α-glucosidase slows down the process of dietary carbohydrates digestion and avoids postprandial hyperglycemia that plays a central role in the development of chronic diabetes associated complication [8]. Thus, α-glucosidase inhibitors have exhibited high promise as therapeutic agents for the treatment of metabolic disorders, such as type II non insulin dependent diabetes, obesity, and hyperglycemia [3].

This work was intended to evaluate α-glucosidase inhibitory effect of coffee previously reported as hypoglycemic and characterize the active principle isolated from coffee.

The intestinal α-glucosidase inhibitory activity was determined as described previously with a slight modification [5]. The rat intestinal acetone powder was suspended in 100 mM sodium phosphate buffer (pH 7.0) and centrifuged at 12,000 rpm for 15 min. The resultant supernatant was used as the source of the small intestinal α-glucosidases. For the assay of inhibitory activities of maltase and sucrase, the reaction mixture consisted of crude enzyme solution, 20 mM maltose or 200 mM sucrose, 100 mM sodium phosphate buffer (pH 7.0) and a given amount of inhibitor (50% dimethyl sulfoxide solution) in a total volume of 0.5 ml. After the reaction mixture was incubated for 15 min at 37 â„ƒ, reaction was stopped by heating the mixture at 100 â„ƒ for 5 min. The α-glucosidase activity was estimated by measuring the liberated glucose amount using the glucose oxidase method. Prior to measuring the glucose amount, the interfering agent, phenolic compounds were removed from reaction mixture by passing through a basic alumina column (1 x 3 cm). Acarbose was used as the positive control.

The enzymatic activities of the various glycosidases were determined spectrophotometrically by monitoring the release of p-nitrophenol from the appropriate p-nitrophenol glycoside substrate [13]. The assay solutions and the potential inhibitors were added to a 96-well plate as follows: 20 L of 0.1 M phosphate buffer (pH 7.0), 20 L inhibitor, 10 L enzyme (1 U/mL), 10 L of 25 mM substrate and 40 L of methanol. Following incubation at 37 °C for 15 min, the assay solution was stopped by adding 300 L of 1 N NH4OH solution. The glycosidase activity was determined by measuring the amount of 4-nitrophenol released from p-nitrophenol glycoside substrate was determined with a microplate reader model 550 (Bio-Rad, CA, USA) at 405 nm.

All of the analyses were performed in triplicate. The concentration of the inhibitor required for inhibiting 50 % of α-glucosidase activity (IC50) was calculated by adjusting the experimental data (% inhibition versus the concentration of the inhibitor) to non-linear regression curves. The mechanism of enzyme inhibition was assessed by analyzing the double- reciprocal Lineweaver-Burk plot.

Isolation of inhibitory compound from coffee

Filtered brewed coffee was prepared in a household coffee maker: 75 g of ground roast coffee of Columbian Supremo (Arabica variety) and 500 ml water to give a brewed coffee. Commercial instant coffee (Tasters’ choice, Nestle) was made by dissolving 75 g instant coffee in 300 ml of hot water. Filtered brewed coffee and instant coffee solutions were separately centrifuged at 12,000 rpm and room temperature for 15 min, and used for isolation of α-glucosidase inhibitor. The supernatant was adjusted to pH 9 with 1 N NaOH and extracted with ethyl acetate. The ethyl acetate layer was then extracted with 0.1 N HCl solution. This acidic solution was again adjusted to pH 10 with aqueous ammonia and extracted with ethyl acetate. The organic layer containing basic components was subsequently evaporated in vacuo. Forty batches of the above ethyl acetate extracts (total 3 kg each of ground coffee and instant coffee) were concentrated and subjected to silica gel column chromatography with an isocratic solvent system of chloroform-acetone (70:30). Fractions containing the active compound (F3-F6) were combined, evaporated, and subjected to a Sephadex LH-20 column (3 x 35cm) with MeOH as an eluent. Fraction number 10-12, which showed a high inhibition and a similar TLC profile (silica gel 60 F254, Merck, chloroform:acetone = 1:1, rf 0.2) were combined and further purified. The final purification of the active compound was achieved through semi-preparative HPLC separation on a reversed phase C18 column (μBondapak, Waters, Milford, MA, USA) eluting with 75 % MeOH and detected through absorption at 254 nm. The retention time was 14.5 min. After removing the HPLC solvent in rotary evaporator, the active compound was obtained as a white powder by crystallization from cold acetone.

Both instant coffee and ground brewed coffee solutions inhibit α-glucosidase enzyme activity. Instant coffee showed a slightly higher degree of inhibition than brewed coffee (Data not shown). The activity-based fractionation of coffee solutions by a series of chromatography techniques led to the isolation of an active compound I (2.24 μg/ g of roasted ground coffee; 3.85 μg/ g of instant coffee) which exhibited a strong inhibitory activity against α-glucosidase.

The isolated compound I was shown to be chromatographically pure by TLC and HPLC with various solvent systems and deduced to be a nitrogen-containing compound based on a positive reaction to Dragendorff’s reagent. The UV spectrum of the compound in methanol exhibited absorption maxima at 230, 285 and 348 nm. The molecular formula of compound I was determined to be C11H8N2 (M+ m/z 168.0736; calcd. 168.0688) by high resolution mass analysis. 1H NMR spectrum of compound I showed 7 aromatic proton signals (δ7.2-8.9 ppm) and one free proton signal (δ10.63 ppm). 13C NMR spectrum showed 11 carbon signals around 110-145 ppm (Table 1). Taken together, the structure of compound I was deduced as β-carboline, norharman (9H-pyrido[3.4-b]indole, Fig. 1) with 1H NMR, 13C NMR, and 1H-1H COSY spectra and confirmed by comparison of physical data with those of the authentic specimen.

Compound I potently inhibited α-glucosidase in a concentration dependent manner, but it did not display any significant inhibitory effects against β-glucosidase, α-mannosidase, and β-galactosidase when tested at a concentration of 10 mM (Table 2). The inhibitory profile demonstrated that the activity of compound I was greater against maltase compared with sucrase (IC50 values: 0.27 mM for maltase and 0.41 mM for sucrase). Although the inhibitory potency was weaker than that of therapeutic drug acarbose (IC50 value: 0.18 mM for maltase and 0.02 mM for sucrase), observed data clearly indicated the potential of compound I as an α- glucosidase inhibitor. The pre-incubation of compound I with the enzyme increased the inhibition of α-glucosidase activity, implying that this compound reacted with the enzyme slowly. The α-glucosidase activity was fully restored when the enzyme was incubated with an amount of compound I which could inhibit enzyme activity up to 90 % followed by eliminating the compound I with a PD 10 desalting column (Pharmacia, Piscataway, NJ, U.S.A). This result demonstrated that compound I was a reversible inhibitor. A double-reciprocal Lineweaver-Burk plotting under various amounts of compound I showed linear lines intercepting on 1/V axis in parallel. The kinetic data suggested that the compound I was an uncompetitive inhibitor, with a Ki value of 0.013 mM (Fig. 2). As a result, compound I, a reversible uncompetitive inhibitor of α-glucosidase, was isolated from coffee and identified as an active principle. When compound I was given in combination with a carbohydrate-rich diet orally, the postprandial plasma glucose levels were significantly dropped in non-diabetic rats (unpublished data).

Compound I, a tricyclic indole β-carboline alkaloid norharman is distributed widely in biological systems and exhibits a wide spectrum of pharmacological and neurological effects: antidepressant and antianxiety effects in rats [7], inhibitory activities of monoamine oxidase and nitric oxide synthase [9], as well as an increase of insulin secretion two- to threefold from isolated human islets of Langerhans [6]. However, α- glucosidase inhibitory activity of norharman has not previously reported. Coffee has been noted as the primary exogenous source of norharman. A high variability in β-carboline content of coffee samples was observed between coffee species (arabica, robusta) and also depended on roast degree and instant coffee production process. An average of 3 cups of coffee per person per day could account for an ingestion of up to 72 μg of norharman [1], although this will depend on the coffee strength.

Coffee contains numerous substances. However, little is known regarding the effects of individual constituents on glucose metabolism. The cohort study has supported that the most prominent coffee compound caffeine is irrelevant to risk of type 2 diabetes [20]. Chlorogenic acid, the most abundant polyphenol in coffee, has been shown to reduce glucose concentrations in rats, caused by increasing insulin sensitivity as well as reducing hepatic glucose output through inhibition of glucose 6-phosphatase [12]. Without excluding any other possible mechanism, this report observes α-glucosidase inhibitory activity as a possible mechanism of hypoglycemic effect of coffee and assigns β-carboline alkaloid norharman as one of active principles in coffee. Coffee appears to contain active principles other than norharman as evidenced by several active peaks in chromatography systems. It may be possible that various active constituents in coffee act synergistically against α-glucosidase activity. Characterization of other active principles is under progress.

Fig. 2. A Lineweaver-Burk plot analysis of rat intestine α-glucosidase inhibition by compound I.

4-Nitrophenol-α-D-glucopyranoside was used as a substrate. The concentration of compound I was 0 mM (

). The values are expressed as means of triplicate reactions.

Table 2. Inhibitory effects of compound I against various glycosidases

Values are expressed as the means of triplicate reactions ± standard deviation. 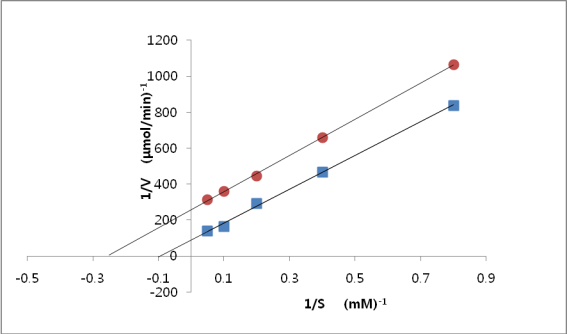