The Y chromosome of the White Campion (Silene latifolia) has undergone genetic degradation, losing some genes entirely from its Y chromosome.

This year, Bergero et al.(1) have shown that the White Campion (Silene latifolia) has lost genes from its Y sex chromosome entirely, and does not yet show significant dosage compensation. Plants which have two specific sexes, rather than consisting solely of hermaphrodites, are termed dioecious. Dioecy has arisen separately multiple times, with dioecious species found in 75% of all plant families(2). It would seem logical to assume that sex chromosomes in plants are just as common; however they are in fact surprisingly uncommon, being found in just 20 of the 648 families of plant(3). Even rarer is the presence of heteromorphic sex chromosomes – which differ between in sizes between the members of the chromosome pair.

The evolution of heteromorphic sex chromosomes relies in particular on a halt to recombination of the sex determining region of the sex chromosomes (3). Recombination occurs during meiosis, and contributes to reducing the effect of the accumulation of deletion errors in a population – known as Muller’s ratchet(2). When recombination is suppressed, chromosomes can differentiate to a point where some regions cannot be tenably recombined without interrupting the function of the gene. Whilst this allows for heterozygote-specific genotypes, it does also allow Muller’s ratchet to take effect once again. To counter this effect the sex determining chromosome (Y in an XY system) becomes less and less active, with more activity moving to the X chromosome in response (4). As these effects continue, the Y chromosome becomes effectively shortened in comparison to the paired X chromosome in a heterozygote. To compensate for the imbalance in activity between sex chromosomes, a theoretical mechanism called dosage compensation operates to balance the phenotypic expression of genes determines by the X chromosome so that expression is equal in both XX and XY organisms (5). A vast amount of the study of plant sex chromosomes has been carried out on the papaya (particularly in the case of sex chromosome evolution from autosomes) and on the White Campion (6).

The level of genetic degradation and diversity in S. latifolia is consistent with that of a drastic reduction in the Y chromosome size, supporting the hypothesis that there was a female biased ratio of dioecious plants. The X and Y chromosomes of S. latifolia are thought to have stopped recombining 5-10 mega-annum (Ma) ago, and between 10% – 20% of X-linked genes have little or no expression of their Y-linked alleles. Three reasons for this lack of expression were investigated by Bergero et al. (1) It is possible that the Y-linked copies of these genes were lost, or potentially are being expressed at an unnoticeable level, or it could be that the X-linked genes are present in regions that do not recombine with the Y, and thus are lost over time. Bergero et al. (1) began trying to uncover which hypothesis was true by identifying genes in S. latifolia which were fully X-linked and hemizygous in males (lacking Y genomic copies), of which there were 52. The “ugly sister” of S. latifolia, Silene vulgaris, a closely related species which lacks sex chromosomes, was employed as a comparison to test the theory that male hemizygoisty in S. latifolia arose through genes movement to a fully X-linked region. S.vulgaris was a perfect candidate for comparison asthe linkage group homologous with theS.latifoliafully sex-linked region is known. All genes that could be tested in S. vulgaris – genes that were male hemizygous in S. latifolia and had a variant that could be used for genotyping in S.vulgaris – were successfully mapped to the homologous sex-linked region in S. vulgaris. This suggests that these genes were carried on the same chromosome before the divergence of the two species, further implying that movement of genes onto the X chromosome is unlikely to have occurred in S.latifolia. Therefore, it is likely that S. latifolia’s Y chromosome lost genes instead of its X chromosome adding genes which had moved. 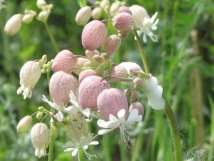 Bergero et al. (1) discovered that 14.5% of the Y chromosome has been lost in S. latifolia in the last 5-10 Ma and 15% of Y-linked genes were present but entirely unexpressed. This gives us the amount of the Y chromosome that has been lost but gives no estimate of the rate of gene loss. In the sex chromosomes of both plant and mammals some genetic regions, called strata, are suppressed before others. S. latifolia has two strata of differing ages, both of which have suffered from some gene loss (7). By mapping the X-Y genetic sequence Bergero et al. (1) found that 3% of the base pair sequence was different on the Y chromosome. This means that the 15% silence in the Y chromosome gene expression is caused by either gene loss or large sequence divergence after pseudogenisation – the process of forming non-coding genes in the DNA which have no proven biological use to the organism.

When mapped against the X chromosome, the younger of the two Y chromosome strata had a higher gene density than the older stratum, ergo; gene loss is higher in the older stratum, as expected. It was thought that any gene loss in S. latifolia occurred after a gene was silenced and therefore not of any use to the plant. However, there were similar proportions of silenced genes in both strata and indicating genes were not necessarily silenced before being lost from the chromosome.