Gait can be defined as the manner by which an animal moves.  This essay will detail the standard gaits of bipeds and quadrupeds in addition to the underlying concepts of these gaits and examples of the animals which practice them.  There are a number of technical terms used to describe gaits which will be outlined along with the classification of various gaits.

Stride is defined as a complete cycle of leg movements, i.e. a select foot being set down to the next setting of the same foot, where each foot is only lifted and set down once in each stride.  Stride is further described by stride frequency, f, the number of strides per unit time, and stride length, λ, the distance travelled in a stride.  Thus, average speed, v, of an animal’s gait can be defined as fλ.

Bipedal walking in humans is described as a pendulum movement of the legs with the hips scribing a circular trajectory for each step.  Humans use walking as their primary gait as it is the most highly efficient and least energy consuming gait for them.  This efficiency comes from the pendulum movement of the legs; the basic principle of a swinging pendulum is conservation of mechanical energy: as potential energy increases, kinetic energy decreases and vice versa.  This helps minimise the metabolic energy required while walking as there is not net mechanical energy, making walking a very efficient gait for humans.  (www.physicsclassroom.com)

Running, a faster gait, is a almost always more energy expending that walking for all animal.  The maximum walking speed is reached, at which the walk must change to a run, when the Froude number equals 1.0.  The Froude number, Fr, is dimensionless and can be defined by

where v is the velocity, g is acceleration due to gravity and l is leg length.  Humans will spontaneously switch from a walk to a run at some point between a Froude number of 0.5 and 1.0, when the walking speed becomes less energy efficient than the same running speed.

Skipping and hopping gaits are not often used by humans are they are less energy efficient and more unstable than the other two.  However, there are some bipedal animals that favour the skip or hop gait.  For example, hopping (when both feet have a relative phase of 0) can be advantageous in kangaroos as the legs are powerful enough to yield sufficient air time.  Similarly, skipping (when the relative phases of one foot is 0 and the other 0.3) was the preferred gait by many astronauts on the Apollo missions as the lesser force of gravity let arise to strides with long air time, making the gait highly energy efficient.

Quadruped gaits are similar to the bipedal gaits, but with more precisely defined variety.  Quadrupeds may walk by walking or ambling; run by trotting or pacing; skip by cantering or galloping; hop by bounding or pronking.  The gaits are classified by the relative phase of each foot as seen below: 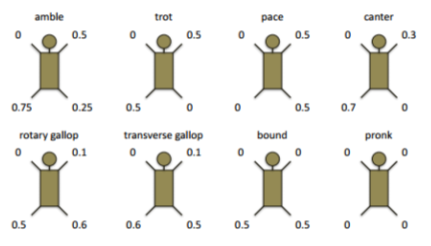 Most quadrupeds are not capable of all gaits due to variables in their body (e.g. leg length, knee bend, foot position, foot size, etc.) and favour certain gaits over others due to energy expenditure.  Quadrupeds generally use symmetric gaits for slower running and asymmetric gaits for faster running.  For example, a horse with increasing speed will walk, trot, canter then gallop as it becomes more energy efficient to do so.  The trot is the most common run for quadrupeds, although camels pace and wildebeests change directly from a walk to a canter.  Quadrupeds like turtles, with slow muscles, can only walk, lifting one leg up at a time to maintain balance in the remaining three feet on the ground.

In conclusion, bipeds and quadrupeds move by a variety of gaits, choosing the most suitable and energy efficient.

R. McN. Alexander, 1984, “The Gaits of Bipedal and Quadrupedal Animals”

R. McN. Alexander, 2004, “Bipedal Animals, and their Differences from Humans”

Physical Principles of Biological Processes 2 (16B), 2017, Lecture 5: Posture and Gait