FGFs play vital roles in regulating cell proliferation, migration, survival and differentiation during the development of the embryo, and apart from embryo development they are also involved in adult tissue homeostasis, and wound healing, they do this by organizing angiogenesis. Gene amplification, chromosomal translocation and mutations are few of the several ways in cancer where FGFRs have been found to have become over active. FGFR variations have been found to be present in a range of human cancers which include breast, bladder, prostate, endometrial and lung cancers among others as well as haematological malignancies. FGFs and FGFRs might possibly proceed in an oncogenic manner to facilitate numerous steps of cancer progression by induction of mitogenic and sending signals of survival, they also help in promoting transitions from epithelial-mesenchymal, invasion and tumour angiogenesis The reason why a great deal of therapeutic research targeting FGFs and FGFRs in the domain of human malignancies is because ligand dependent and independent activation have been found to promote a broad range of cancer progression in human tumors which are driven by FGF/FGFR mutations, amplifications, resistance acquired from targeted treatment, tumorneoangiogenesis, hence these all show that anti-FGF/FGFR drug development is a fruitful endeavor. “FGF signaling to RAS-MAPK branch and canonical WNT signaling cascade mutually regulate transcription programming. FGF signaling to PI3K-AKT branch and Hedgehog, Notch, TGFβ, and noncanonical WNT signaling cascades regulate epithelial-to-mesenchymal transition (EMT) and invasion.FGF/FGFR pathway deregulations are increasingly recognized across different humancancers” (M & H., 2013). For future of therapeutics of this target it is essential to understand the mechanisms of these alternations and the role they play in cancer promotion and the how they develop drug resistance.

“Dovitinib, Ki23057, ponatinib, and AZD4547 are orally bioavailable FGFR inhibitors, which have demonstrated striking effects in preclinical model experiments” (M & H., 2013) “Dovitinib, ponatinib, and AZD4547 are drugs that are currently going through clinical trials. As there are many modes of actions for FGFR inhibitors to prevail over drug resistance, FGFR-targeted therapy is a promising strategy for the treatment of refractory cancer therapies and research strategies” (M & H., 2013). “The FGF family consists of 18 ligands; FGF ligand nomenclature extends to FGF23 although only 18 FGFs function as ligands, which signal through four high-affinity FGFRs (FGFR1 to FGFR4)” (Jain & Turner, 2012). FGFR auto-phosphorylation brings about the activation of the tyrosine kinase domain.FGF signals are transduced to theRAS-MAPKor PI3K-AKT signaling cascades. “FGF signaling cascades crosstalk withWNT, Notch, Hedgehog, and TGFβ/BMP signaling cascades during embryogenesis, adult-tissue homeostasis, and carcinogenesis” (M & H., 2013). FGF/FGFR alterations that result in cancer are divided into two broad categories, one being the constitutive ligand-independent activation of FGFR and the other in abnormal ligand-dependent signalling. The activation of FGFR pathway generally leads to cancer by oncogenesis, drug resistance and neoangiogenesis. “reports have indicated that FGFR1 is amplified in20% of squamous non–small cell lung cancers (NSCLC)” (J, et al., 2010). “Studies have shown that FGFR1 -amplified NSCLCs are very sensitive to FGFR inhibition by PD173074” (J, et al., 2010). “FGFR-targeted drugs exert direct as well as indirect anticancer effects, because FGFRs on cancer cells and endothelial cells are shown to be involved in tumorigenesis and vasculogenesis, respectively” (Katoh & Nakagama, 2014). 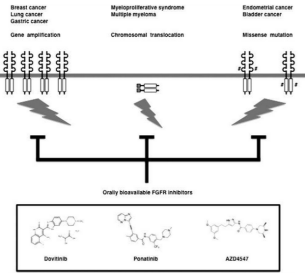 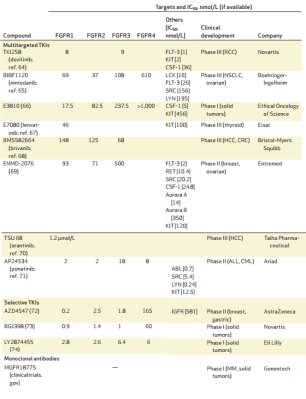 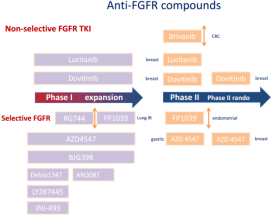 Monoclonal antibodies that can selectively recognize FGF or FGFR is another area which allows for further choices anti-FGFR activity for cancer therapy. “Anti-FGF19 monoclonal antibody inhibits the in vivo growth of colon cancer cells expressing FGFR4 through a blockade of the FGF19-FGFR4-FRS2-ERK signalling axis” (Katoh & Nakagama, 2014). “RNA-based drugs such as small interfering RNA(siRNA) and synthetic microRNA(miRNA) are also emerging as cancer therapeutics” (Katoh & Nakagama, 2014).The steady increase in knowledge in regards to the regulation of the miRNA pathway of FGFR signalling will be a step forwards in development of better RNA based therapeutics. The epidermal growth factor receptor (EGFR) is a cell-surface receptor tyrosine kinase of the ErbB family it is however abnormally activated in many epithelial tumors. “Several mechanisms lead to the receptor’s aberrant activation that is observed in cancer, including receptor overexpression, mutation, ligand-dependent receptor dimerization, and ligand-independent activation” (J & J., 2006). This is why EGFR like FGFR inhibitors related therapeutics research is vital. “Two major approaches have been developed and demonstrated benefits in clinical trials for targeting EGFR; monoclonal antibodies (mAbs) and tyrosine kinase inhibitors (TKIs). EGFR inhibitors like, cetuximab, panitumumab, etc. (mAbs) and gefitinib, erlotinib, lapatinib, etc. (TKIs) are now commercially available for treatment of variety of cancers” (C, D, I, S, & A., 2013) Ligand-dependent receptor dimerization, ligand-independent activation (similar to FGFR are associated with development of a broad range of cancers. “The anti-EGFR mAbs and TKIs have partially overlapping toxicity profiles, but distinct routes of administration, serum half-lives and therefore dosing schedules. Both classes of agents show clear antitumor activity, and cetuximab and gefitinib have been recently FDA approved for colorectal and lung cancer indications respectively” (PM, 2004)

Present research related to EGFR like that for FGFR inhibitors is primarily focused on identifying molecular makers which can be used to determine patients that will respond to anti-EGFR therapeutics, find better combinatorial EGFR inhibitors and develop effective drugs.