In the lecture we discussed several responses of the lung to acute injuries. List these responses and discuss one of these responses providing an example of a toxin or a chemical that induces such response in the lung. (5 points)

The lung is particularly vulnerable to toxicity because it gets exposed to foreign compounds both in the external environment and internally through the bloodstream. Acute responses of the lung to injury occur in order to protect the lung from further damage. These responses include the following:

Pulmonary edema is the accumulation of fluid in the lung, which collects in the alveoli; it leads to impaired gas exchange and may cause respiratory failure (Medical News Today, 2014). Exposure to ammonia, a volatile and water soluble gas, has been associated with pulmonary edema. The ammonia gets absorbed into the aqueous secretions of the upper airways of the respiratory system, it reacts with the water in aqueous secretions to from ammonium hydroxide, an alkaline and corrosive solution. Though ammonia may not cause permanent damage it leads to impaired permeability and the accumulation of fluid which obstructs the upper airway and collects in the air sacs. This may lead to low blood oxygen content and altered mental status (Center for Disease Control and Prevention, 2014). The dissolving of the ammonia into aqueous solutions on mucous membranes may also result in corrosive injury to the mucus membranes. High concentrations of acrolein, a common component of smoke, can also cause pulmonary edema following smoke inhalation.

Paraquat, is a widely used herbicide that specifically exerts its toxic effect on the lung tissue. Discuss the mechanism of toxicity of paraquat explaining the specificity of lung toxicity induced by this compound. (5 points)

Paraquat has been implicated in number of both accidental and intentional cases of poisoning. It causes dose-dependent toxic effects following oral ingestion; and, absorption of a toxic dose usually results in abdominal pain, vomiting and diarrhea. In addition to the lung, other target organs include mainly the kidneys, but may also cause cardiac and liver toxicity if one if exposed to large doses.

Mechanism of paraquat toxicity on the lung

Paraquat is selectively taken up into type I and II alveolar epithelial cells by active transport, as a result it reaches a higher concentration than in most other tissue. It causes severe lung injury and fibrosis. The mechanism of toxicity involves the initial reaction of paraquat with an electron donor such as NADPH; paraquat accepts the electron to form a stable radical cation (Figure 1); if this occurs under aerobic conditions, this electron is transferred too oxygen giving rise to superoxide; this process gets repeated over and over in the lungs due to the ready supply of oxygen, resulting in the formation of a redox cycle. The formation of the redox cycle is believed to be responsible for the toxicity by causing the following effects: the formation of large amounts of superoxide may overwhelm the neutralizing effects of superoxide dismutase, allowing the superoxide to accumulate, causing a variety of toxic effects such as the peroxidation of lipids leading to the formation of lipid radicals that may cause membrane damage (Figure 2); and, the depletion of NADPH due to the formation of active oxygen species may compromise the alveolar cells, reducing their ability to carry out their functions. 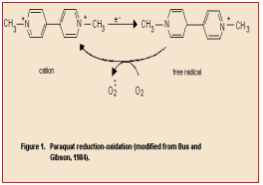 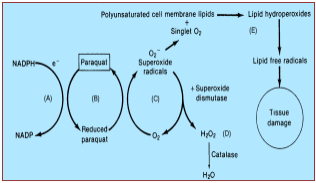 The Center for Disease Control and Prevention (2014). Medical Management Guidelines for Ammonia. Retrieved from: http://www.atsdr.cdc.gov/MMG/MMG.asp?id=7&tid=2

Discuss the patterns of neurotoxicity and provide one example of a toxin producing each pattern. Examples from the assigned textbooks are recommended. (6 points)

The nervous system is a highly complex network of specialized cells and damage to this system may have permanent and serious effects because there is very low capacity to regenerate and little reserve functional capacity.

The following are the patterns of neurotoxicity:

Discuss the vulnerability of the nervous system to toxicity. (4 points)