Biodiversity is a conflation of biological diversity. It is the interest in the biological parts of an ecosystem, and diversity is not just the number of different species, but also the richness of each individual species. It can be measured in three different ways: species diversity, habitat diversity and genetic diversity.

One of the ways of quantifying diversity is using the Simpson’s Diversity Index.

N=Total number of organisms of all species found

N=Number of individuals of a particular species

Although biodiversity has never remained constant throughout the history of the earth and there were periodically mass extinctions, the extinct species will be replaced by new species. But the current extinction rate is 1,000 times the natural rate which is the biggest in earth history. Recent human activities have played an important role in it, especially in rainforests and coral reef. 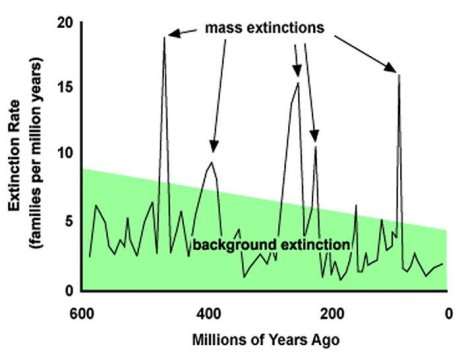 The main factor causing the loss of biodiversity is over exploitation of resources. Since the world population grew dramatically from 1950, the demand of food and housing were increased and forced the conversion of forests and wildlife habitats, both land and ocean, into agriculture and residential land. In order to increase food supply, genetic modified food was introduced claiming to secure food for the growing populations. The genetic modified plants and fishes may contaminate to other organisms undesirably. Some species may find it hard to complete and will be completely eliminated. Also wastes produced from these processes further pollute the environment and reduce the ecosystem ability to regenerate the resources.

Saving endanger species from extinction is not the best way to conserve the biodiversity. We have to consider the conservation of the habitat that they are living which it normally leads to conserve of species diversity and genetic diversity

It is good to have governments, experts, professionals, and financial institutions come together and demonstrating their interests in no net loss of biodiversity. There are some major factors needed to consider.

In Australia, as part of the supplementary Environment Impact Statement (SEIS), the proposal suggests for every one hectare of nature refuge affected, two hectares of remnants bush is required to protect. It sounds like a good deal, but biodiversity offsetting is not as simple as that. Also ultimately, governments can revoke the protected status of any conservation area without any compensation.

Quantifying, it is hard to measure tangibly of how much lost and how much can be gained by offsetting

Frog habitat was destroyed during the development of the Sydney Olympic Park. New habitat was created for offset and it is now found that the area is 19 times larger than the affected habitat offsets. It is much more than the proposed offset ratio of 2:1. Although this is a successful story, the project was under intensive monitoring for over decade.

The world is over led by multinational corporates and profits always come first.

Reports raise concerns on reforestation (the reversal in deforestation). The newly planted forests only have a few numbers or even a single species and have a lower biodiversity compared with the natural forest. Also planting these new trees like pine and eucalyptus will take up a large volume of underground water, jeopardising the forest communities. It is endangering other species in the forest rather than restoring it. They are planting these trees for the profits of their companies and not for the environments.

Some large multinational companies always use words like sustainability, low carbon foot print, and biodiversity offset programmes. Do they really do it for the environment and society or just a gimmick for promoting their companies’ business?

The airline carbon offset programme, passengers can offset the carbon emission by purchasing the “Carbon Offsets”. Making you feel you are contributing your share to help the environment. Is it really helping the environment or just putting a price tag on our nature?

Values of nature are different amongst nations

Not every nation treasures and values nature the same way. The less economically developed countries may be more concern on economy than nature. 87% of the world deforestation happens in just about ten countries. Brazil and Indonesia are responsible for the 51% emission from forest loss. The economic benefits that they preferred always lead to biodiversity loss. Timber has been traded (mostly illegal) to the more economically developed countries.

Generally we make an assumption that people are the cause of deforestation, but some are more responsible than the others. It is the fact that the more economically developed countries have done more damages to the world’s natural resources. It is good to put forward the issue in the “No Net Loss of Biodiversity Conference” in June 2014. The concern is if all nations do not put people and nature before profits, biodiversity offsetting will never happened.

“Biodiversity and Economics” from Mount Holyoke College – An institution for undergraduate education in South Hadley, Massachusetts, USA, accessed on 8th May 2014, <http://www.mtholyoke.edu/~willi29m/classweb/econ/biodiversity.html>

The Trustees of the Natural History Museum, London, accessed 15th May 2014, <http://www.nhm.ac.uk/nature-online/species-of-the-day/biodiversity/alien-species/index.html>