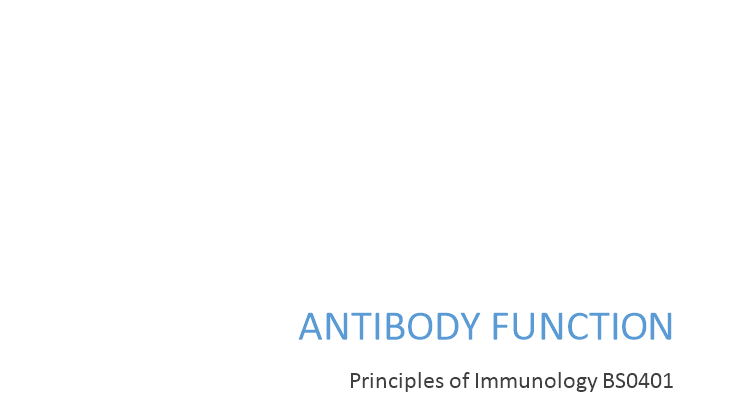 Many important assays are based around an antibodies ability to its antigen and cause a change in its physical state which is more often than not visible by eye. One example of this is agglutination, this often occurs when the antibody binds to the antigen which is displayed on the surface of a large particle such as a pathogenic bacterium. However what we are looking at in this experiment is the ability of antibodies to bind to the antigens displayed on the surface of red blood cells (RBC), this is known as haemagglutination. In this experiment we added antibody to sheep red blood cells, if agglutination occurs then the observation will be that the red blood cells will form a continuous layer across the base of the microtitre plate well. If no agglutination occurs then the observation will be a small clump at the bottom of the V-shaped well due to the settling of the cells. The main aim of this experiment is to find out the effect that immunization has on the concentration of antibodies present and whether immunization has a positive affect helping the immune system produce antibodies to protect against pathogens. I expect that the more the sera has been immunised then the more agglutination will occur, as increased immunization results in a higher concentration of antibody created so when dilution is carried out the concentration will stay higher for longer allowing agglutination to still occur. (239 words) 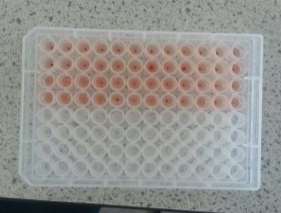 Fig.1 shows my results, the initial PBS and serum mix is the furthest well to the left with each double dilution the next well to the right. You can see that in some wells, mainly the first two rows, there is a small red clump at the bottom of the V-bottomed microtitre plate showing that no agglutination has occurred, but others have a red carpet-like covering showing that agglutination has occurred. (75 words)

Our results show some wells that have undergone agglutination as there is a red carpet-like covering however others have a small red clump at the bottom of the microtitre well. The results from the first two rows show no agglutination has occurred in any of these wells as there is a small circular clump at the bottom of the well. In the first three wells of the third row there is a red carpet-like covering, this shows that agglutination had occurred. The reason this has agglutinated is due to the fact the serum added to well C1 had been immunized with SRBC 6 days before we had used it, this had allowed the immunoglobulins to get passed it’s ‘lag phase’ (around 6 days) and reach the primary stage where Immunoglobulin Mu (IgM) is produced allowing binding so agglutination occurs. No more wells have agglutinated due to the dilution, decreasing the concentration by 4 fold each well. 6 in 7 wells on the fourth row have agglutinated, more wells haven’t agglutinated due to the fact that the serum added to well D1 was immunized 3 times over 21 days prior to use. This means the ‘lag phase’ has been surpassed and the secondary response has occurred, by this stage memory cells are produced so antibodies get produced faster and in a higher concentration. (222 words) (Mention about the anomaly on 4th row)

The results are as I would have expected; the first row only contains PBS and the second row contained sera 1 which was pre-immunisation, this meant it contained no antisera, meaning no antibodies were present to produce immunoglobulins. The results from the next two rows are also in accordance to what I would’ve expected as the first few rows have agglutinated with more agglutination occurring in the final row due to a much higher concentration of antibodies present. Overall I believe that the experiment has worked as expected, showing that immunisation has a huge impact on the concentration of antibodies present and that it is crucial in helping the immune system to fight off invasive pathogens. (116 words)

The different serum samples have different antibody titres due to the immune response of the rabbit. The reason serum one has no antibody titre is due to the fact it was never immunised, meaning it never had any antisera so immunoglobulins were not present and able to create antibodies. The titre of serum two is higher as it was immunised 6 days prior to use, this means antisera is present and therefore immunoglobulins are present so antibodies can be created as the ‘lag phase’, of around 6 days, has been surpassed. The titre of serum 3 is the highest due to the fact it has been immunised 3 times over 21 days prior to use. This means that not only the ‘lag phase’ has been surpassed but the primary and secondary response of the immune system has been activated meaning that a lot more antibody is created when the target antigen is identified. (154 words)

The main isotypes of serum 2 and 3 will be Immunoglobulin Mu (IgM), as this is what is created during the primary immune response and is very good at causing agglutination, and Immunoglobulin Gamma (IgG), as this is of the highest concentration in the blood and also has the longest half-life, of around 21 days.

A) The pathogenesis of Hashimoto’s thyroiditis is complex and involves numerous factors. A loss of tolerance to normal thyroid cells can lead to the production of antibodies against thyroid tissue, this causes the thyroid gland to be destroyed. The major histocompatibility complex (MHC) antigen presenting cells, including dendritic cells and macrophages, invade the thyroid gland. These present autoantigen components of the thyroid to the immune system. Thyroglobulin is the main protein produced in the thyroid, it is thought to have around 40 different epitopes, and play a vital role in the pathogenesis of the disease. The formation of auto-reactive cells, directed against the thyroid, could result from defects in central or peripheral tolerance. Loss of immune tolerance is associated with genetically determined immune defects or the lack of regulatory T-cells which impose the suppressive function. This is followed by formation, clonal expansion, and maturation of T-lymphocytes and B-lymphocytes in the lymph nodes. A phase of autoimmunity the follows, characterized by uncontrolled production of self-reactive cells and autoantibodies in response to the antigens. This initially occurs in the lymph nodes but as the disease progresses the process moves to the thyroid where the development of lymphoid tissue follows. The B-lymphocytes produce antithyroglobulin (TGAB) and antithyroid peroxidase (ATPO) antibodies which are directed against thyroid cells. The auto-reactive T-cells infiltrate the thyroid and mediate destruction through cytotoxicity. Macrophages stimulated in this process produce cytokines which, along with antibodies, cause apoptosis. Finally, caspases induce enzymes which are directly involved in the destruction of thyroid gland. In a normal thyroid, production of new cells and destruction of old cells is regulated around a constant, however this control is lost during the course of the disease. The severity and clinical outcome are determined by the rate of apoptosis. Symptoms are similar to an underactive thyroid gland, which are very general and can include: fatigue, weight gain, constipation, dry skin, depression. The swollen thyroid gland may also cause a lump to form in the throat, known as agoitre. (331 words) B) In anagglutinationtestserumis added to atest tube which contains a particularantigen. If the antibodies an antigens agglutinate and formimmune complexes, then the test is positive. However, if too many antibodies are available which are able to bind to the antigen, then the epitopes become coated by antibodies meaning few or no antibodies are able to bind to more than one antigen. This means the antibodies are unable to bridge between antigens, which in turn causes no agglutination to occur, hence the test is interpreted as negative. However, in this case, the result is a false negative. The zone of high antibody concentrations within which no agglutination was able to occur is called theprozone. To overcome the effect of prozone the concentration of the agglutinin, in this case the antibodies, must be decreased. This dilution will mean there will be fewer antibodies present which would allow the antibodies to bind to one or more antigens and allow agglutination to occur. (166 words)