Every individual biological trait requires an evolutionary and proximate explanation. The proximate explanations representing the “how,” usually employ conventional tools, e.g., molecular biology, biochemistry, and cell biology to examine the anatomy, ontogeny, and physiological traits of a modern-day organism. The evolutionary explanation which represents the “when and why” usually combine fossil record methodology, DNA sequencing, and comparative morphology to explain the phylogenetic history of a particular trait and how that trait provides fitness advantage for adaptation and survival of a species throughout millennia. This research study is concerned with the angiopoietin protein group essential for the development and functioning cardiovascular system. Cardiovascular biology as a discipline employs proximate mechanisms to explain how blood vessels and their endothelial lining develop and function Or how the heart generates force or even how the heart and the blood vessels become dysfunctional during a disease like cancer, heart disease, and sepsis. Little research has been done concerning the evolutionary mechanisms of the cardiovascular systems in living organisms, to explain phenomena such as why some circulatory systems are open while others are closed, or why we have vascular endothelial cell lining in some systems and not in others. Answering these questions is essential in providing insights in design constrains for drugs, and selective pressures inherent of the human physiology and the consequent vulnerability to disease. The prime goal of this review is to explore the origin of the blood vascular system and endothelium in relation to ancient protein families, that is, the angiopoietin protein families, particularly angiopoietin-1 and angiopoietin-2 growth factors which regulate endothelial and vascular function. We hold that examination of the angiopoietin evolution, and bioinformatics analysis of the data generated will help in the development of more effective modulators of angiopoietin action for use as potential new drugs that target the ANG-TIE pathway (currently in clinical development for oncological and ophthalmological applications. Existing evidence indicates that the blood vascular system first appeared in an ancestor of the triploblastic close to 600 million years ago, as a means to adapt to the time-distance constraints of diffusion. The endothelium then evolved in an ancestral vertebrate 540–510 million years ago to maximize flow dynamics and barrier function, and/or to localize immune and coagulation functions.

Angiogenesis refers to the growth of blood vessels and is a prime biological process that controls embryonic development with numerous applications in the study and resolution of fatal human diseases. It is, therefore, a process of neovascular formation from pre-existing blood vessels during embryogenesis, adult tissue homeostasis, and carcinogenesis, (Katoh, 2013, page 763). Angiogenesis proceeds through angiogenic sprouting, proliferation, endothelial cell migration, and vessel destabilization/ stabilization.  Angiogenesis research is centered on the vascular endothelial growth factor (VEGF) and the VEGF receptor system, that is, Tie receptors and their angiopoietin (Ang) ligands (second vascular tissue-specific receptor Tyr kinase system). These receptors are vital in the Ang-Tie signaling process that is essential during embryonic vessel assembly, disassembly and maturation of the endothelial lining of the blood vessels (Davis et al., 1996. pp. 1166). It also functions as a key controller of adult vascular homeostasis. All angiopoietins bind with similar likeness to a cell-specific endothelial tyrosine-protein kinase receptor. For example angiopoietin small proteins (cytokines), are responsible for controlling micro-vascular and macro-vascular permeability, through vasoconstriction and vasodilation, which happens by signaling smooth muscle cells surrounding the affected blood vessels, (Saharinen, Eklund, & Alitalo,2017, page 635). There are 4 identified Angiopoietin, namely; Angiopoietin-1(ANGPT1), Angiopoietin-2(ANGPT2), Angiopoietin-3(ANGPT3) and Angiopoietin-4(ANGPT4). For the purpose of the discussion, we shall focus on ANGPT2 and ANGPT1 and their application in phylogenetic evolution and analysis.

ANG-1 is a type of angiopoietin glycoprotein secretion encoded by the gene ANGPT1, which activates a cell-specific endothelial tyrosine-protein kinase receptor by inducing its tyrosine phosphorylation. The key functions of the Ang-1 are; (1) blood vessel maturation and stability, (2) mediation of reciprocal interactions involving the endothelium, the surrounding matrix and the mesenchyme, (3) to a limited extent has a contribution to the early development of the heart, (4) responsible for prenatal endothelial cell survival and blood vessels remodeling, (5) responsible for inducing angiogenesis, (6) preventing vascular leakage. An important discovery of COMP-Ang1 to replace the less potent native Ang1 performs better in phosphorylating the tyrosine kinase with Ig and epidermal growth factor homology domain 2 or (Tie-2) receptor, and Akt in primary cultured endothelial cells, enhancing angiogenesis in vitro and increasing adult angiogenesis in vivo(Cho et al., 2004, page 5548).

For humans, this angiopoietin is encoded by the gene ANGPT2, whose core function is maintaining tissue homeostasis by promoting adaptive inflammation and consequent tissue reconstruction. During inflammation, ANG2 functions as an antagonist and promotes endothelial permeability in synergy with inflammatory cytokines (Dhanabal et al., 2005). The gene ANGPT2 has a role in angiogenesis and carcinogenesis, responsible for human conditions such as obesity, and atherosclerotic diseases. Angiopoietin-2 (ANG-2) is expressed in areas undergoing vascular remodeling and has great involvement in neovascularization. ANG2 can also function as a context-dependent agonist as well as an antagonist of TIE2. Autocrine ANG2 at times functions as a TIE2 agonist during normal homeostasis in particular vascular beds, e.g., the lymphatic vasculature.

Fibrinogen-related domains (FReDs) take their Name from the globular portions of vertebrate fibrinogen molecules where they were first recognized. They are found in a wide variety of proteins from vertebrates, such as tenascins, ficolins, angiopoietins, fibronectin, and some other extracellular proteins. Emphasis will be placed on some putative immune-related FRePs (FReD-containing proteins).

The structure of FReDs contains three Subdomains denoted by A, B, and P, (Yee et al., 1997). Subdomain A consists of approximately 50 amino acid residues with a single disulfide bond. Sub-domain B and sub-domain P are closely associated together containing about 150-200 amino acid residues. 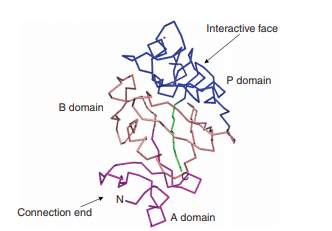 Human genes for 23 different FReDs (in 23 different FRePs) have been identified in the human genome. They include four tenascins, three ficolins, nine angiopoietin or angiopoietin-like proteins, three that generate fibrinogen, and four others, that is, hepassocin, fibroleukin the FIBCD1 protein, and microfibril-associated protein (MFAP). Here Angiopoietins consists of well-characterized proteins that stimulate blood vessel growth (Fagiani and Christofori 2013.pp.18).  Authentic angiopoietins, i.e., angiopoietin-1, angiopoietin -2, and angiopoietin -3 (or angiopoietin -4) are substantially unique among FReDs with regard to having a third disulfide bond which is readily recognizable as a C-X-C-X-C motif. Non-mammalian vertebrate genomes, however, vary with regards to the number of angiopoietin gene sequences they encode. For instance, Opossum, chicken, platypus zebrafish, and frog have three, similar to humans,  the green anole lizard and mango-fish have four and lamprey has six, all of which contain the CXCXC motif with the extra disulfide bond. All animals have evolved over millennia to survive and reproduce for continuity thereto. They achieve this feat by cellular respiration through the process of acquisition and distribution of oxygen for, the capture, ingestion, absorption and distribution of food/nutrients, and through the excretion of undigested materials and metabolic wastes. However, the structure of these systems, including the structural designs of cardiovascular systems for animals is limited by developmental constraints, genetic constraints and the laws of chemistry, biology and physics, (Harm and Thornton,2013, page 559). Hence, for a better understanding of tissue growth, biophysical properties of vascular systems, in addition to their molecular mechanisms, need to be investigated; this includes a consideration of these designs to provide important insights into the evolutionary history of the blood vascular system and endothelium.

THE EVOLUTIONARY HISTORY OF THE ENDOTHELIUM AND BLOOD VASCULAR SYSTEM

To better understand the process, we will discuss when did the blood vascular system and endothelium first evolve?

To answer this question, we may want to examine quite a number of combined homological processes and convergences that have occurred across time. The last common ancestor from whence vertebrates, annelids, and mollusks were also the ancestor of the protostome-deuterostome, which lived approximately 600 -700 million years ago. Despite lack of sufficient fossil records, research has proved that this precursor animal (protostome-deuterostome) was a segmented bilaterian (triploblastic coelomate). If we hold this as being true, then it means that the blood vascular system evolved as an adaptation to bypass the partitions of a segmented animal. Prior to this it is believed that either blood flow was mediated by peristaltic vessels (as in annelids), or probably through extracellular matrix percolation in the spaces. Over the last 600- 700 million years, the cardiovascular system has seen significant modifications as a result of selective adaptation pressures. This is to mean there are cases where the blood vascular system has regressed, e.g., in flatworms and nematode, others it has transitioned room a primitively closed system to an open circulation. Here evidence of convergent evolution is witnessed when the open reverted to a closed in ancestral cephalopod. Finally, the endothelium is evidently present in all vertebrates, and distinctly absent in invertebrates. Microscopic analysis reveals that the cells which appear to cling to the inner surface of some invertebrate closed vessels lack the classical morphological features of endothelial cells. Therefore, research has proven that the endothelium must have appeared in an ancestral vertebrate, after the divergence of the species from the cephalochordates and urochordates estimated to have occurred some 540 and 510 million years ago. 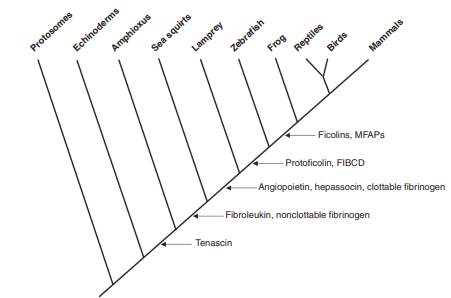 Figure 3; simplified time-line showing where different FRePs had first made their evolutionary appearance along the deuterostome lineage.

Human VEGF and ANG combined with tyrosine kinase with immunoglobulin and TIE-2 domains; consist of a group of proteins involved in vascular homeostasis, angiogenesis, and vascular integrity. By using silico tools, we can identify several possible homologs of VEGF, ANG, and TIE-2 in invertebrate and shows clearly that these proteins can be conserved through evolution. These proteins play a vital role in vascular maintenance, vascular immunity over evolutionary time.

The basic local alignment search tool (BLAST) was used to search the national center of biotechnology information (NCBI) database, for the VEGF family member’s search the BLAST tool was used since it locates local alignments for easy detection of relationships among sequences that share only isolated regions of similarity (Altschul and Lipman, 1990; Altschul et al., 1990). The databases searched were; human (h), rat (r), mouse (m), pufferfish (p), mosquito (mq), zebrafish (z), and nematode (Ce; Caenorhabditis elegans). In the initial silico experiments, E-values for the BLAST results failed to show any significant conservation over time. Therefore each h-VEGF-like family member sequence found in the BLAST analysis of the invertebrate and vertebrate genome was used in another BLAST analysis back into the NCBI human genome database. This helped in ensuring that the subject sequences were similarly based on the resultant E-values.

To examine the evolutionary relationship of VEGF, ANG, and TIE molecules, all members of these protein families were considered.

These results were used to develop a phylogenetic tree, as shown below. In conclusion, the goal of this review was to discuss the evolutionary history and evolutionary analysis of Angiopoietin protein, in particular, angiopoietin-1 and angiopoietin-2, and the role these angiopoietins play in functional development of the cardiovascular system. Ancient evolutionary timelines for ancestral vertebrate and invertebrate species have been identified to illustrate this further. An interesting discovery made is that both the VEGFR and TIE molecules appear not to be derived from a common ancestor that produced VEGF and not ANG. Evolutionary analysis using immune informatics seems to be a reliable and invaluable method understanding complex evolution of angiogenesis (Srivastava, 2010, page 720), blood system vascular and the immune system