Over the past 60 years, the field of molecular biology has experienced significant advances. Following the genomic revolution, genetic engineering enabled to modify endogenous gene networks using technologies such as site-directed mutagenesis, DNA recombination, DNA sequencing, synthesis and others. Now, after rigorous engineering, the field of synthetic was born making it possible to create novel biological entities that behave in a controllable and predictable manner 1.

Synthetic biology is defined by the Royal Academy of Engineering as “The design and engineering of biologically based parts, novel devices, and systems as well as the redesign of existing natural biological systems” 2. It builds on the work of conventional genetic engineering by not only focusing on individual genes but by applying an engineering driven perspective designing and creating complex artificial biological systems.

At present, synthetic biology has been applied in a wide range of areas demonstrating its potential to solve major global challenges in the fields of bioremediation, biosensing, production of biofuels, biomaterials, therapeutics, and biopharmaceuticals. Examples comprise the creation of organisms that could clean hazardous waste such as radioactive elements or arsenic 3, modification of yeast for the production of isobutanol 4, engineering viruses and bacteria to treat cancer 5,6, and the development of a diabetes treatment using an optogenetic gene circuit 7.

Synthetic biology makes use of engineering analogies such as the one illustrated by Andrianantoandro and collaborators were it is compared to computer engineering at different hierarchy levels (Figure 1). Both disciplines take a bottom-up approach by integrating its component parts to build a more complex system. At the bottom are the biochemical molecules (DNA, RNA, proteins and other metabolites) equivalent to the physical layer of capacitors, transistors and resistors in computer engineering. One level up at the device level, physical processes are controlled by biochemical reaction comparable to engineered logic gates. By connecting and integrating these modules into host cells, synthetic biologists can program cells with the desired behaviour. More complex tasks can be accomplished by using a cell population, in which cells communicate each other to perform in a coordinated way, much like the case of computer networks 8. 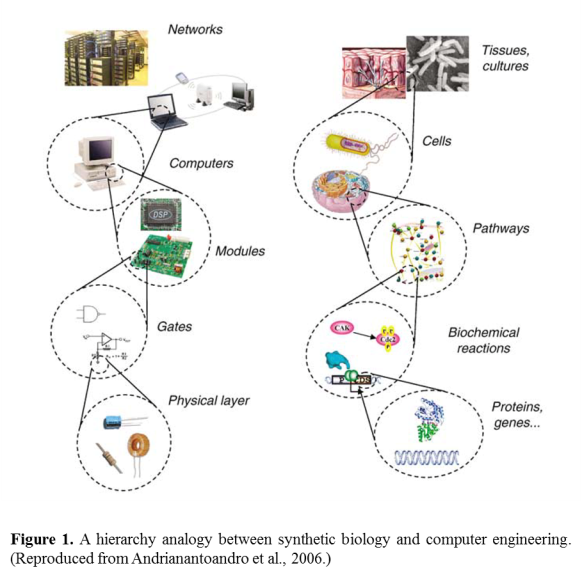 Finally, from an engineering point of view, what synthetic biologists are doing now is quite like what electrical engineers have been doing for many years, designing electronic circuits using standard components, such as resistors, capacitors and transistors. The difference lies in the building blocks that are used. Synthetic biologists design genetic circuits with specified functions using standard engineered biological parts such as genes, promoters, ribosome binding sites and terminators. In this regard, synthetic biology is to biology what electrical engineering is to physics, which both deal with electrons but one focuses on the understanding of their nature and the other aims to make use of them to build useful applications.

Synthetic biology follows a hierarchical structure, building up systems from smaller components. At the lowest level are the parts, which are pieces DNA that encode for a single biological function such as a promoter. These parts are then combined into the next layer, the device layer, which is a collection of parts that performs a desired order function (e.g. the production of a protein). Devices are further combined into a system, which can be defined as the minimum number of devices necessary to perform the behaviour specified in the design phase. Systems can have simple behaviour (e.g. an oscillator) or a more complex behaviour (e.g. a set of a metabolic pathways to synthesise a product.)Parts and devices are usually treated as modular entities in design and modelling. This means that it is assumed that they can be exchanged without affecting the behaviour of the other systems components that are left untouched. At the module level, biological devices can be used to assemble complex pathways that function like integrated circuits.

Early synthetic biology studies began developing circuits in prokaryotic organisms. Inspired by electronic, first systems made use of basic elements such as promoters, transcriptional repressors and ribosome binding sites to create small modules. These modules included the construction of oscillators 9, genetic switches 10, and digital logic gates 11. The successful construction of the first systems demonstrated that engineering-based methods could be used to programme computational behaviour into cells 12 (Figure 2). 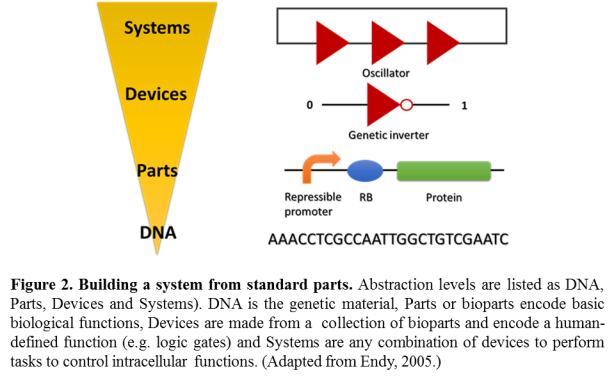