The Effects of Various Liquids on Fat Composition

The body contains different types of blood cells that has particular positions in the human body. First and foremost, the blood cells are produced in the bone marrow. The portion of blood that contains cells are the red and white blood cells and platelets. The function of the red blood cells is to carry oxygen from the lungs throughout the rest of the body. White blood cells help the body fight off any infections. Platelets are cells that are used specifically for clotting. All of these types of cells have the potential to reproduce themselves. Eventually, they will commit to the stem cells to only create specific blood cells. I decided to construct this project because I find interest in discovering the multiple techniques that the body uses.

Many factors can contribute to fats being in the blood stream. “Evidence is emerging that red blood cells play an important regulatory role in the development of altherosclerosis, binding pro-inflammatory proteins that cause dysfunction in the inner lining of the blood vessel wall-the endothelium. We explored how a high fat-diet causes red blood cell dysfunction in this study( Bogdanov 2015).” High fat diets can contribute to the malfunctions of the blood cells.

Furthermore, the fats in the blood are called lipids. In some instances lipids join with the proteins within the blood to form lipoproteins. These proteins make energy for your body. Lipoprotein is another name for cholesterol. There are three kinds of lipoproteins in the blood: HDL. LDL, and VLDL. These are also known as the levels of density.

Provided that high fat diets contribute to the increase of fat in the blood cells, a liquid such as water could possibly decrease the fat in blood cells. For example, some people detox and drink at least a gallon of water a day to cleanse their natural bodies. The increase of fats in your blood and blood cells could cause health issues such as elevated cholesterol levels. It can even cause more fatalities such as heart attack or stroke.

Weight gain also has other different factors that would contribute to it. First of all, some liquid have a positive energy balance. This simply means that it is absorbed through the stomach and broken down into energy by the liver. Basically the liquids that are consumed is turned into energy. The next factor would be an increase in appetite. This also triggers unneeded snacking. Majority of the time the snacks that are chosen will not be healthy. Another way is the way that fat is distributed to the body. Some liquid consumption contains carbohydrates and makes it harder breakdown fat with in the body. Thus fat is especially deist righted into the middle abdominal region. A factor that could contribute to weight gain due to the consumption of liquids are the types of liquid . ” A number of studies have investigated the feasibility of simultaneous analysis of multiple fat-soluble vitamins in one LC-based assay(Molnar16–18).

Researchers reported an HPLC based method for vitamins A, D2, and D3 in milk(Reddy 390).”Dark beverages also contribute more to the weight gain. The only beverage that would actually benefit is water.

If the individual consumers 7.1 g/kcal or more of a dark beverage over an extended period of time, then their will be a significant increase in the individual’s weight after consumption.

         Independent Variable – the independent variable would be the liquid because it would not change unless you are switching the types of beverage.

         Dependent Variable- the dependent variable would be the weight of the the worm because it is was it actually being tested in the investigation.

         Control –the group of worms with absolutely no liquid because it would be neutral .

         Control- the group of worms with similar body structures .

         Control- the group of worms placed in a different setting

         Petri Dish to hold the organism which is being tested 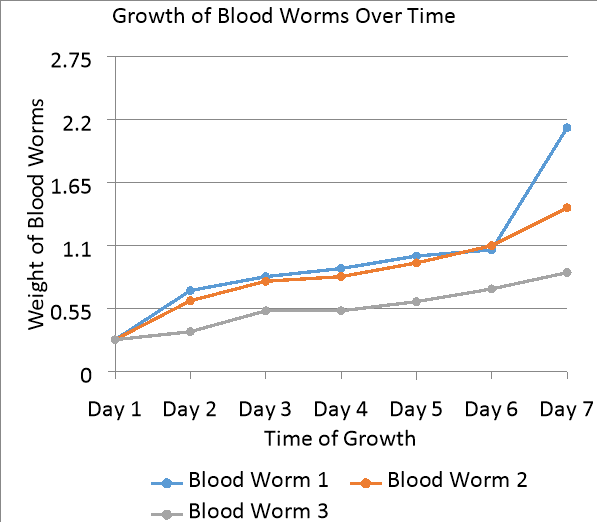 Within the charts above, it analyzes the growth trend of the blood worms over an extended period of time.

The purpose of this experiment is to evaluate the effects of various liquids on fat composition, specifically on blood cells. To test this I had to first think of the weight of the blood worms and how much liquid they could consume. Considering their little bodies, they could only consume a certain amount which shows by the data makes few changes. The first graph represents the numbers collected from the experiment. The second graph shows the trend of growth between each worm over a period of time.

The goal of this investigation was to determine if liquid could effect the weight through the blood cells. This was investigated by measuring various amounts of liquids and testing them on blood worms. Each blood worm started at an original weight of 0.28 oz. Over a week’s time, the blood worms’ weight all changed in different variations. In conclusion, the data collected supported the hypothesis in the end.

The process of this investigation was limited in numerous ways. First and foremost, the process of getting the actual worms is time consuming which could allow further delay in getting the actual experiment conducted. Also, it could be a possible chance that the worms would have reacted to the liquids at all. This investigation led to the possible question of what could and could not work. Also, the roles of the liquids and blood worms were identified and justified as to why they are being used.