CAN EATING LESS INCREASE YOUR LIFESPAN?

There are many individuals and groups worldwide that have practiced annual or other, fasting of some sort for centuries, for an event or ritual of religious/cultural significance. There is sufficient evidence to presume that these fasts have physiological benefits. This report will discuss the advantages and disadvantages of intermittent fasting and calorie restriction diets. It will also give an overview of recommended energy intake and how this contrasts with real life situations.

The GDA (guideline daily amounts) table and the BMI (Body Mass Index) table are two internationally recognized guides created to give people knowledge on how much and what food groups they should eat (GDA). Also an approximate healthy body weight (BMI).

GDA according to the Food and Drink Federation[10].

BMI is the sum of a simple formula:

BMI classification according to the World Health Organization [11].

It is important to remember that these are guidelines and not targets. Everyone’s body and nutritional needs are different.

According to the key findings of a National Diet and Nutrition survey, mean caloric intake for men 19-64 years was 2151 kcal/day, women 1614 kcal/day and children 4-10 years was 1555 kcal/day. Mean intake of saturated fats exceeded recommended amounts in all age groups. Mean intakes of oily fish was below the recommended one portion per week for all age groups. The ‘5 a day’ fruit and vegetable recommendation was met by the majority of adults. Evidence of low vitamin D was found in the majority of adults. These results show that while caloric intake may be below recommendation, we are also getting too much and too little of specific nutrients[12].

If a person wanted to be specific about the amount of calories to consume, a person would be placed in a calorimeter and the heat produced by the body mass measured. However, there are also simple formulae for calculating your resting energy expenditure over a 24 hour period.

For example, according to this formula my resting energy expenditure is 1367 kcal/24 hours. Obviously, depending on your daily routines you will need to account for energy expended during activity.

There have been many studies and experiments into the effects of calorie restriction and fasting on the body. It has been found in simple organisms, monkeys, mice, humans and other animals that fasting included many changes in cellular protection and generally increased lifespan. In 2003 a report on intermittent fasting (IF) in mice showed that beneficial effects are still seen if the energy intake overall is not reduced. Mice fasted every other day and were allowed to gorge on feeding days, these mice experienced reduced insulin levels (reduced risk of diabetes), less stress, longer life, as well as other changes. The mice showed similar health advantages as mice on a 40% reduced calorie restricted (CR) diet[14]. An unrelated study on mice given a form of Alzheimer’s Disease (AD) reported advantages for mice on IF and CR diets. Mice were put on one of three diets – IF, CR and control fed (normal food amounts), all given the mouse form of AD. At three months there was no notable difference between the groups. At 17 months IF and CR mice showed higher exploratory levels and performed better in physical and cognitive trials. It was concluded that that IF and CR diets aid in protection against deficits in cognitive function in mice[1].

In 2009 the Wisconsin National Primate Centre conducted a study on Rhesus monkeys. During the time recorded there was a 50% survival rate of control fed monkeys as opposed to an 80% survival rate of CR monkeys. CR delayed the onset of age related ailments, lowered frequency of brain atrophy (reduction of brain tissue) and the frequency of diabetes and cancer was reduced. CR had slowed the aging process in these monkeys [2].

We know that in humans these beneficial effects of CR and IF have been shown. The Minnesota Starvation Experiment was a study that took place during WWII on how severe calorie restriction affected lean men[3]. There were many positive outcomes, lowered body fat, improved lipid profile, lowered blood pressure, decreased heart rate and decreased energy expenditure at rest. They also experienced some negative side effects such as, anemia, depression, muscle wasting, weakness, dizziness and neurological deficit. This experiment called for extreme calorie reduction, a less drastic diet or a diet with different nutrition specifics may have less drastic results. Another study on humans consisted of comparing differences of CR alone and CR + exercise (EX)[17]. CR diet was 25% energy reduction. CR + EX was 12.5% energy reduction + 12.5% increased physical exercise. There was also a control fed group. The results showed that in the CR and CR + EX groups that approximately 10% of body weight was lost and fat distribution was unaltered. Exercise seemed to play just as an important role as CR in terms of energy balance. Exercise also has fitness and other benefits supporting claims that a combination of both will produce the best physiological results.

An area research that has received a lot of attention in terms of these diets is cancer patients. It has been found that fasting before and after chemotherapy treatment can help protect normal cells from side effects, but does not protect the cancer cells. In an experiment done on 10 cancer patients aged between 44 and 78 years it was shown that all participants experienced a reduction in most chemotherapy related side effects and a slight increase in others (headaches, nausea, dry mouth)[4], validity of this sample size is questionable and can not be generalised to the rest of the population as only older participants were used. Another study on cancer patients tells us fasting protects normal cells but not cancer cells from the effects of chemotherapeutic drugs against melanoma, breast cancer and glioma cells. The two treatments together resulted in long term cancer free survival in mouse models of neuroblastoma[16]. There is also evidence that IF rather than CR may be more effective in the cancer patient situation. A study shows that fasting for up to 5 days prior to chemotherapy treatment protects patients from the side effect without causing chronic weight loss. Whereas a CR diet of 20% – 40% energy reduction in chemotherapy patients has a more modest effect on glucose levels and also promotes chronic weight loss.

There are many economical issues to consider surrounding this topic. Statistics show that health costs in the UK are rising.

Below is a table outlining the government expenditure on the top three disease categories in England for a five year period. These diseases continue to rank highest among NHS disease expenditures. This information can be considered reliable and valid as it is derived from information gathered from NHS, monitored and controlled by the government. 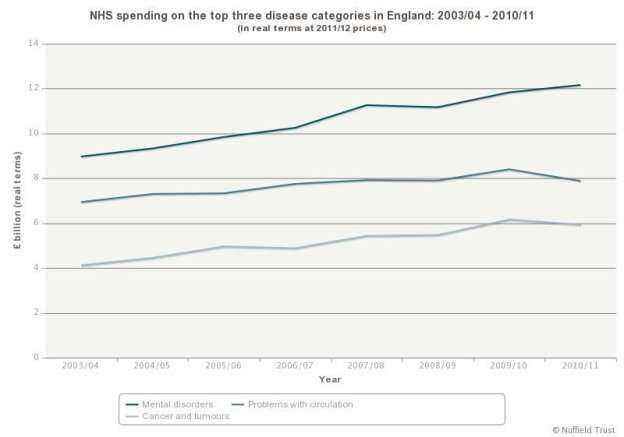 In england we also spend a lot of money and time producing, importing, exporting and purchasing food. The following statistics are taken from the 2011/2012 pocketbook, which is comprised of government run surveys using samples representative of the population[18].

These figures suggest that if we were to implement a CR or even IF diet in our households in this society that it could have a significant impact on these figures, perhaps affect many people working in the Healthcare or Agricultural sectors, but, in theory save our economy money.

Ethical issues also arise in relation to this topic on how to do research and gather data. The main problem is that people just don’t want to be hungry and will generally choose to continue their regular eating habits over a slight health improvement, this will put off the majority of the population from even attempting a diet like this. There are also restrictions on the type of studies and experiments you are allowed to perform on Humans, especially without permission.

This report concludes that the major health benefits that stem from CR and IF are very apparent, not only in healthy people of normal weight that want to boost immunity and lessen their risk of degenerative diseases. Also in cancer patients, to aid in lessening side effects of the chemotherapy treatment process. Dieting in this way could also be extremely helpful to an individual looking to reduce their weight to a more healthy range, of course a balance of healthy diet and exercise are essential for best results. All in all it seems unlikely that many people will want to implement a diet like this into their lifestyle, it is unrealistic to think that britain will ever be effected large scale by a drastic, nationwide change in diet like this but it is nice to know the health benefits we could reap by even a short term change in diet or regime.