On a global scale, variation in temperature separates geographical extent and occurrences of organisms into different latitudinal gradients and habitat choice. This separation was attributed to the physiological tolerance and adaptation of each organisms to variation in climates with latitudes (Addo-Bediako et al, 2000; Angilletta et al, 2002). Temperature variation further impact the behavior of fish in such a case that variation in temperature signals changes in the life cycles especially reproduction as well as metabolic activity i.e. preparation for aestivation or during drought periods (Dolomatov et al, 2013). These responses are important factor in the successful survival and continuity of fish species.

Moreover, the variation in temperature as well as body size of fish play a significant impact on the growth and bioenergetics of fish (Jobling, 1994 as cited in Sun et al 2014). Fish growth was strongly correlated to changes in environmental temperature and is mainly due to variation on food preferences and consumption of fish (Sun et al, 2014). Thus, fish tends to choose low temperature to satisfy energy requirements when availability of food is low. This shows that the metabolic demand influences plasticity of fish species to variation in temperature, which in effect shows the variation in food availability, to satisfy energy requirements and growth (Killen, 2014).

Additionally, studies show that the oxygen consumption of fish was highly dependent on the variation of environmental temperature. Further, the rates of consumption of oxygen was often used as measure for metabolic activity of the fish (various authors as cited in Lefevre et al, 2014 and Turker, 2011). This further indicates the state of physiological environmental structure at specific temperature controls metabolic activity of fish. Therefore, at higher temperature there is an elevated response on the metabolic rates which affects energy budgets of fish as well as growth (Turker, 2011).

In this study, we will measure the oxygen consumption of the Common carp. Common carp or Cyprinus carpio have significant ecological and economic impact with worldwide distribution (Fishbase, 2015) which best qualify as subject species for this study. This species can tolerate varying levels of oxygen concentration and were sensitive to changes of oxygen levels in the water (Soncini et al, 2000; Moyson et al, 2015). Thus, this study aimed to measure the effect of temperature on the aerobic metabolism of the common carp, Cyprinus carpio. The oxygen consumption of common carp will be measured and responses to the rate of oxygen consumption with changes in temperature gradients will be observed. The rate of response will then be correlated to the aerobic metabolism of common carp and further to energy budgets.

a. Preparation of Samples and Reagents

Oxygen consumption of the fish Common Carp, Cyprinus carpio, was measured using confinement method at specific temperatures. First, the weight of the fish was measured and then fish are placed into different containers with defined temperature measurements, high (28°C) and low (18°C) temperatures as well as a control (28°C) without the fish to account for microbial respiration. Each container holds a single fish and left for 30 minutes for high temperature and 45 minutes for low temperature. Container are carefully sealed to prevent interaction with the atmosphere and presence of bubbles was removed.

b. Titration for Oxygen Consumption

Titration for oxygen concentration was made by pipetting 100mL of the water from each of the bottles with different temperatures and pipetted into the Winkler bottle. Then, MnCl and alkaline KI was added one after another. The bottle was tightly closed and shaken vigorously for 15 to 20 minutes. H2S2O4 was added into the solution after precipitate forms in the bottom of the bottle. The solution was then shaken again until precipitates disappear. Then, 50mL of the solution was transferred into a beaker and Na2S2O3 was added until it is completely transparent and yellow coloration disappears. Drops of starch was then added and titrated until the color disappears. Then, Na2S2O3 was titrated into the solution until the blue coloration by starch almost disappear. The amount of titrated Na2S2O3 was then measured and noted down.

in the water was calculated using the formula:

was the volume of the titrated Na2S2O3 in L;

was the concentration of Na2S2O3 in µM and

denotes the volume of the titrated sample in L.

To calculate the oxygen consumption of the fish (

, the following equation was used:

was the oxygen concentration in control expressed in µM;

was the oxygen concentration in the chamber containing fish in µM;

was the volume of the chamber containing the fish in L;

was the volume of the fish in L;

was the weight of the fish in g; and

was the amount of time the fish spent in the chambers.

The calculation for the rate of consumption of the oxygen (

by the fish was made using the following equation:

was the oxygen consumption rate at temperature 1;

was the rate of oxygen consumption at temperature 2;

was the lower temperature in oxygen consumption determination; and

was the higher temperature in the determination of the oxygen consumption.

Proteins are macromolecules which are consists of long-chains of amino acids. They are important part of functional activities of living organisms such as DNA replication, molecule transport and metabolic reaction (Wikipedia, 2015). In fish, proteins are primarily used by the species for growth as well as for energy and life support during starvation, aestivation or migration events. Protein requirements of different fish species varies depending on feeding preferences, such that carnivorous fishes requires more proteins than herbivorous and omnivorous fishes (Craig et al, 2009) such as the common carp, Cyprinus carpio.

As feeds, proteins are responsible part of fish diet which affects growth. Research shows that if fish was fed less than satiation in daily basis, the growth was faster than fed more than satiation (Cho et al, 2001). Additionally, during periods of food availability, fish retains additional energy such as lipids and proteins within the organs i.e. liver which varies with body sizes and species (Lupatsch et al, 2003). Moreover, the protein requirement of fish is generally higher in fish than in any animals. Therefore, efficient utilization of proteins were highly significant for fish than in any animals, especially commercial aquaculture fishes i.e. Cyprinus carpio (StankoviÄ‡ et al, 2011).

Moreover, consumption of endogenous protein as energy source provides maintenance of metabolic activities especially during starvation periods (Rios et al, 2011) i.e. migration, reproduction or aestivation periods. As the fish enter the starvation stage i.e. migration of fish, the lipid reserves were consumed during half of this period and proteins will become a significant source of energy to survive after lipids are consumed (Mommsen 2004; Rios et al, 2011).

Homogenates are prepared by carefully removing the liver of the fish. Then, deionized water was added to the fish liver and diluted 12x to make the homogenates. Table 2 shows the weight of the liver and the fish for each homogenates.

b. Measurement of the Standard Curve and the Proteins of the Fish

Proteins in the liver of fish was measured by preparing 100 µL of crude homogenate into a test tube. Then, 2mL of NaOH was added into the homogenate with the concentration of 0.01 N. Samples were then put into an incubation chamber 60°C for 30 minutes.

The concentration of proteins content of the fish was calculated using the following derived regression formula:

was the slope of the regression;

intercept of the regression and

The absorbance ratio using BSA as reference was shown in Figure 1 and was analysed using regression analysis. The fitness of the regression model was accounted at 99% of the variation of the standard curve. 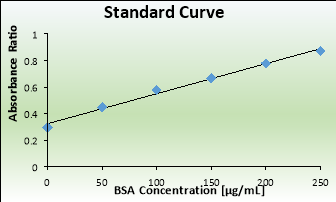 Figure 1. The absorbance ratio of the standard curve using BSA as reference.

b. Protein Concentration of the Fish Liver

Using the derived equation (Eq. 6) of the regression model in Figure 1, the concentration of the protein content of fish liver was calculated both for the pure homogenates and for the samples which are diluted 10x with NaOH.

[VJG1] Will be updated soon after discussion has been finished

y = weight of the liver

21 = dilution of NaOH for proteins

12 = dilution of samples in distilled water

I don’t know if this is the correct formula.