Does mild stress have a significant effect on the pulse rate of type A personalities when compared to type B’s?

When the body encounters stress the brain produces stress responses which are managed by the hypothalamus. Stress can have a negative physiological effect on the body, including a rise in heart rate. Different personality types and the ways in which they respond to the environment have been investigated to seek to establish if personality type makes them more prone to developing coronary heart disease (CHD).

Stress responses can be short-term ‘fight or flight’ (Canon, 1915), produced via the sypathomedullary pathway (SAM) or long-term which are regulated by the hypothalamic-pituitary-adrenal axis (HPA). Bodies are designed to deal with short term stresses however if continually stressed they are unable to be at rest and the result of a high pulse is that it can lead to high blood pressure, irregular heart rhythms, higher cholesterol, and coronary artery disease.

In 1974 Friedman and Rosenman conducted studies to establish why some people were more prone to coronary heart disease (CHD) than others. They found that certain types of people had similar traits, type ‘A’s living lives at higher stress levels to type ‘B’s and that ‘A’s were twice as likely to develop CHD. The study was criticised for being gender biased, however the Framington Heart study in 1980 involved both men and women and found similar results. Of all the type A characteristics hostility has been found to be consistently linked with increased stress levels leading many to propose that it is this trait which had a determining effect rather than the whole of type A (Michael Myrtek, 2001). In March 2014 Mostofsky found that people were most at risk of suffering a heart attack in the 2 hours following an angry outburst.

From this evidence it can probably be concluded that type A personalities are more likely to respond physiologically differently to an environmental stressor than type B’s. (300 words)

This experiment aims to establish if type A personalities respond physiologically differently to a stressor that type B personalities. (19 words)

There will be a significant difference in comparable pulse rates for type A and type B personalities taken during a mildly stressful activity .

The alternate hypothesis is two tailed and non-directional. (32 words)

There will be no significant difference between the pulse rates of Type A and Type B personalities when undertaking a mildly stressful activity. (23 words)

This was an experimental study which means that it was carried out under rigorous experimental conditions and allowed for the establishment of cause and effect relationships. The independent variable (IV), personality type, could therefore be manipulated in a systematic way to measure its effect on the dependent variable (DV), which was pulse rate. Independent subjects design was used to compare the measure of pulse rate (DV). (66 words)

Twenty subjects were chosen by way of opportunity sampling; 6 were male and 14 were female. They were all aged between 18 and 75 years. None of the participants had heart disease and the results were disclosed to the participants immediately after testing. (43 words)

Participants were invited into a private room where they were briefed. This was delivered via a script (see Appendix D) in order to ensure that all participants were provided with the same information. Participants were advised that the test was a speed investigation and that the questionnaire was to find out whether a certain type of person is quicker than another. Participants were asked if they had a heart complaint prior to commencement of the investigation. Had they been the plan was to continue with the experiment but not use their data reducing the chance of confounding variables.

The test was administered and scored. Participants who fitted type A or B personalities were invite to stage 2 of the study. (119 words)

A pulse rate was taken before administration of the dot-to-dot (PR1) and the data recorded in the raw data sheet.

A separate pulse rate was taken as participant sought to find the missing dot (PR2) and again after the task was completed (PR3.

For ethical reasons participants were debriefed via a script (see Appendix E) and were provided with the opportunity to ask questions. Participants were given access to their results.

N= number of participants taking part in the study

Using interval data and with both sets of scores having a similar standard deviation, the parametric t-test was most appropriate for the experimental study. It was a two tailed non directional test as the outcome was not predicted, simply that there would be a difference.

There were 20 participants in total and one measure was compared, pulse rate (DV), measured in 5 second periods.

An independent samples t-test was conducted to compare pulse rate in type A and type B personalities.

The t-test formula is as follows:

Biology of stress | Centre for Studies on Human Stress (CSHS). 2015. [ONLINE] Available at: http://www.humanstress.ca/stress/what-is-stress/biology-of-stress.html. [Accessed 05 May 2015].

How do personality types impact people’s responses to stress? – HowStuffWorks. 2015. [ONLINE] Available at: http://health.howstuffworks.com/wellness/stress-management/personality-types-impact-on-response-to-stress.htm. [Accessed 05 May 2015].

How to Write a Psychology Research Report | Simply Psychology. 2015. [ONLINE] Available at: http://www.simplypsychology.org/research-report.html. [Accessed 09 May 2015].

Type A and Type B personalities. 2015. [ONLINE] Available at: http://changingminds.org/explanations/preferences/typea_typeb.htm. [Accessed 05 May 2015].

Each of the 13 items listed below has two extremes (e.g. easy going – hard driving), one at each end of a continuous scale. Circle the number you feel most closely represents your own behaviour. 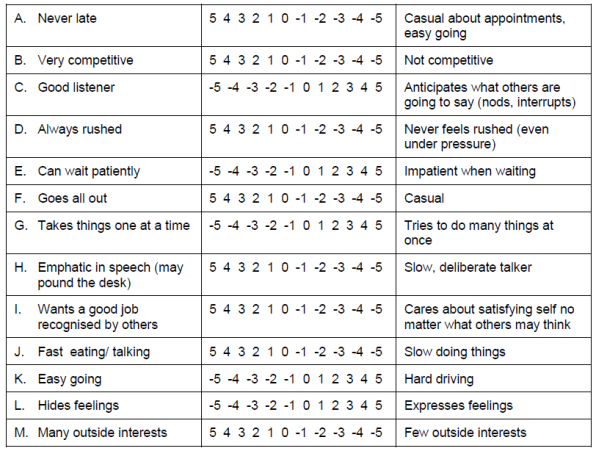 Please join the jots below to complete the picture. 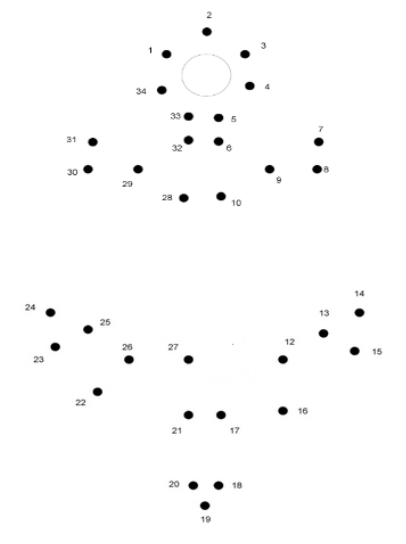 This sheet was stapled to the questionnaire and dot-to-dot puzzle after completion to organise the paperwork and record the details for easy reference when populating the raw data table.

The investigation was to establish what type of personality you have and to see how you responded to the mild stressor which was the missing dot. This was measured via your pulse.

Type A personalities tend to be competitive, typically in more of a hurry, multi-taskers, impatient and possess a ‘short fuse’.

Type B personalities tend to be relaxed, do one thing at a time and be more inclined to express their feelings.

The results of the test are A or B and your pulse rate was x.

Do you have any questions?

Thank you for taking part in this experiment.