Nanoparticles are becoming increasingly used as materials in over 2000 consumer products due to their unique chemical, physical and electrical properties. A nanometer is one billionth of a meter and nanoparticles can be 1-100 nm in size. Silver nanoparticles are used for their antibacterial properties in many every day products such as food storage containers, air filtration systems and bandages. Nanomaterials are structures, devices, and systems at the nanometre scale. They are fast becoming an important material that can range from better and faster electronics to more efficient fuel usage, drug discovery and stronger, more resistant materials (Whatmore, 2006).

The demand for engineered nanomaterials is a rapidly growing industry which was expected to reach a market size of approximately 2.6 trillion dollars by 2015 (Lee et al., 2010), however there is little knowledge on whether nanomaterials have an adverse effect on the environment or to human health and what the extent of these effects could be. Engineered nanoparticles have a wide range of chemical, physical and electrical properties such as conducting heat with low resistance and being stronger and lighter than other bulk materials (Tolaymat et al., 2017). The broad number of products that contain nanomaterials for consumers may lead to the release of an increased quantity of engineered nanoparticles in to the environment, which display different physiochemical properties than larger materials. (Geisler-Lee et al., 2012). While the benefits of nanomaterials are broadcasted, their potential effects to the environment and to human health from their widespread use in consumer products are just becoming recognized. (Hoet et al., 2004). 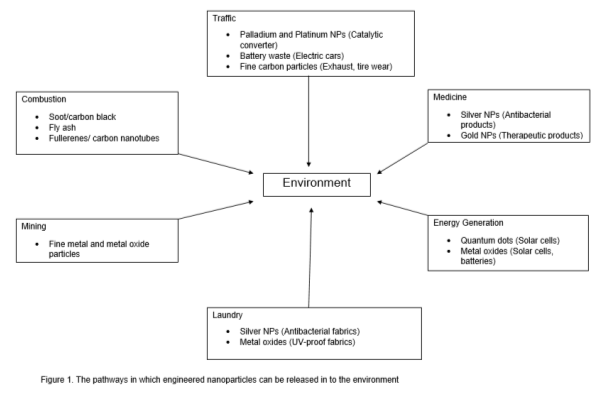 One of these effects to the environment could be the release of nanomaterials, through different pathways, in to bodies of water including lakes, rivers, and streams which could also cause run off in to soils and in to the air. Recent research (Das et al., 2012) showed that AgNPs rapidly but temporarily inhibited natural bacterioplankton production. Nanoparticles can affect biological behaviour at the cellular, subcellular and protein levels of a plant.

The effect of nanomaterials on plant species is a topic that is being widely researched however there is still no conclusive answer on whether nanomaterials, specifically silver nanoparticles, have a negative impact on plant species, however metallic engineered nanoparticles may have stimulatory and inhibitory effects on plants. Arabidopsis thaliana is widely used in scientific research and was used in this study to further investigate the effects of silver nanoparticles on germination of seeds and also chlorophyll fluorescence after treatment with differing concentrations of nanomaterials.

The silver nanoparticles used in this experiment were capped with PVP; this is because capped nanoparticles are less likely to aggregate in the solution over time and are more stable than uncapped nanoparticles (Tejamaya et al., 2012). Due to this a control of PVP had to be used to show that the capping had no effect on the plant species itself.