The main analysis methods are power spectral analysis and spindle automatic detection. No significant variation between EF and EL was observed for mood and objective measures of total sleep time, sleep efficiency, stage1 sleep latency, stage2 sleep latency, rapid eye movement sleep latency and the percent of every stage except stage1. The results also showed that the numbers of fast and slow sleep spindles had no significant difference between early follicular phase and luteal phase. There are some limitations in our study, so this problem still needs further research.

Normal menstrual cycle consists of four menstrual phases, including menstruation, follicular phase, ovulatory phase and luteal phase. In different menstrual phases, the level of reproductive hormones is different, such as progesterone and estrogen. Present studies show that progesterone has a positive effect on the production of the sleep spindle [1]. Moreover, there are also some differences in the core body temperature and the rate of metabolism [2]. As we all know, the physiological processes of humans are influenced by the change of the level of reproductive hormones, such as in sleep. Present research has proved that the menstrual cycle has an effect on human sleep as well as the sleep spindles and, the typical event of the sleep electroencephalogram (EEG) [2,3]. Some character of sleep is genetically determined [4], including sleep spindles. Sleep spindles have many functions, such as memory consolidation and learning [5,6,7,8]. There are many explorations about sleep spindles [9,10,11], but we still know little about fast and slow spindles.

Eight healthy women were recruited from Xi’dian University, including one 20-year-old, one 21-year-old, three 22-year-olds, two 23-year-olds, and one 24-year-old. One of them was excluded due to the poor quality of the sleep data. All the subjects had regular sleep schedules and menstrual cycles. The mean cycle length ranged between 26 and 31 days. They had not taken oral contraceptives or other medication. Subjects were non-smokers. They had to limit the intake of alcohol and coffee on the day of the sleep EEG recording, and had no afternoon nap, or strenuous activity.

The recordings started between 23:00 hours and 00:00 hours in accordance with the usual sleep routines of the subjects and were ended 8 hours later. Before recording the sleep EEG, subjects were asked to fill in a relevant scale including the Pittsburgh Sleep Quality Index (PSQI), emotional self-rating scale and some basic information. After the subject woke up the next day, he/she needed to evaluate last night’s sleep, such as the time woken up during the last night and so on.

The sleep EEG was recorded in the sleep laboratory. Six subjects were in the EF phase when they collected the EEG data for the first time, while the rest was in the EL phase. After we acquired the EEG data, preprocessing was conducted. Then the partition of sleep stages was carried out [12].

The total sleep time (TST), sleep efficiency (SE), stage1 sleep latency (S1L), stage2 sleep latency (S2L), rapid eye movement sleep latency (REML), the percent of every sleep stage and mood were assessed. All of them showed no significant changes between the EF and EL phase except the stage1 percent (Table 1).

Table 1 Subjects’ sleep measures of the EF and EL phase

Table 1 shows the subjects’ sleep measures of the EF and EL phase as well as the significance between them. Only the percent of stage1 had a significant difference between the two phases (paired-t-test, P<0.05). 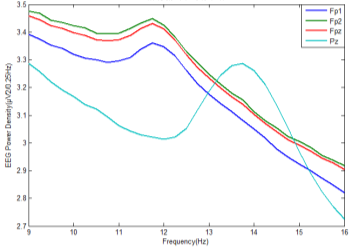 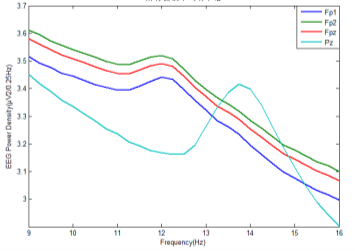 Figure1. The mean power spectrum of all subjects in the EF (top) and EL (down) phase. The x axis and y axis represent the frequency and the power density of sleep EEG. There are four electrodes including Fp1, Fp2, Fpz and Pz. The Fpz is the mean of Fp1 and Fp2.

We can see from Figure1 and Table2 that the power density of Pz was bigger than Fpz in the 13.25-14.75Hz regions despite what the menstrual phase is, while in the slow sleep spindle frequency regions, Fpz was bigger.

The method we used was MatchPersuit. The spindle should meet three terms: â‘ the frequency must be in 10-16Hz regions; â‘¡the duration should last 0.5-2 second; â‘¢the amplitude should be more than 75μV.

Table 3 The difference of fast and slow spindles’ numbers between the EF and EL phase.

We can see from Table 3 that there was no significant difference between the EF and EL phase (paired-t-test, P>0.05).

The investigation showed that there was no significant difference between fast and slow spindles in the EF and EL phase. But there are some limitations that may influence our results. The first is that the number of subjects is so small that the results may not be able to represent the truth. The second is that the quality of the data we collected was poor. The last one is that the method we used was not so good, so we need to search for a better one to analyze the fast and slow spindles.