Over many millennia, natural products were the only means for food, to treat diseases and injuries. Recently in the field of pharmaceutical sciences great efforts are being directed towards herbal drugs by incorporating them in already existed drug delivery system to solve the problem related to poor solubility, poor bioavailability, dosing problem, stability, toxicity etc. Dermal delivery of drugs through proniosomal gel is a recent candidate receiving considerable attention. Boswellic acids (BAs) are pentacyclic triterpenoids; the major constituents of the gum derived from the plant Boswellia serrata (family Burseraceae). BAs have low oral bioavailability due to its lipophilic nature and high first pass metabolism. Proniosomes offer a versatile vesicle delivery concept with the potential for drug delivery via the transdermal route. This review covers all aspects of proniosomes including mechanism, methods of preparation emphasizing on scope and potential of proniosomal gel as an potential delivery system for boswellic acids.

Proniosomes (gel) are semisolid liquid crystal products of non-ionic surfactants easily prepared by dissolving the surfactant in a minimal amount of an acceptable solvent (ethanol) and the least amount of aqueous phase (water). These structures are liquid crystalline compact niosomes hybrids that can be converted into niosomes immediately upon hydration. Use of proniosome gel in topical/dermal delivery does not require hydration prior to application, but they can be applied as such or loaded on a base material of emulsion, gel, ointment, etc. prior to application. The base material helps in the application of the formulation to the skin and dilution of the active material. Proniosomal gel offers a great potential to reduce the side effects of drugs and increased therapeutic effectiveness. Proniosomes can entrap both hydrophilic and hydrophobic drugs. These are generally present in transparent, translucent or white semisolid gel texture, which makes them physically stable during storage and transport. Due to the limited solvent system present, the proniosomes formed were the mixture of many phases of liquid crystal, viz. lamellar, hexagonal and cubic phase liquid crystals.

These liquid crystals present an attractive appearance because of their, transparency and high viscosity, compositions. Addition of water leads to interaction between water and polar groups of the surfactant results in swelling of bilayers. Now a days proniosomes are used to enhance drug delivery in addition to conventional niosomes. They are becoming popular due to their semisolid/liquid crystalline compact nature when compared to niosome dispersion.

Boswellic acids are a series of pentacyclic triterpenes from the gum resin of Boswellia serrata tree belonging to the family Burseraceae. Utilisation of boswellic acids (BAs) into various herbal formulations has experienced increasing popularity around the world. Animal studies and pilot clinical trials support the potential of BAs for the treatment of a variety of inflammatory diseases like inflammatory bowel disease, rheumatoid arthritis, osteoarthritis and asthma. Compared to NSAIDs, it is expected that the administration of BAs formulations is associated with better tolerability. Despite its multipurpose benefits, BAs have low oral bioavailability especially 11-keto-β- boswellic acid (KBA) and 3-acetyl-11-keto-β-boswellic acid (AKBA), the most potent BAs because these BAs are lipophilic in nature and not solubilises into the intestinal fluid thus limiting its systemic availability. High first pass metabolism also plays a crucial role in limiting the systemic availability of BAs. Topical application of BAs at the site of inflammation can overcome their systemic side effects and improve their therapeutic activity. It is an established fact that topical formulations like proniosomal gel enhances the topical delivery of lipophilic drugs.

Proniosomes are microscopic lamellar structures. They combine a non-ionic surfactant of the alkyl or dialkyl polyglycerol ether class and cholesterol followed by hydration in aqueous media. The surfactant molecule direct themselves such that the hydrophilic ends of the non-ionic surfactant orient outward, while the hydrophobic ends are in the opposite direction to form the bilayer.

Drug characteristics to be developed as proniosomal gel

The drug selection criteria could be based on the following assumptions:

Proniosomes can be categorized in two major divisions such as

Dry granular type of proniosomes involves the coating of water-soluble carrier such as sorbitol and maltodextrin with surfactant. The result of coating process is a dry formulation in which each water-soluble particle is covered with thin film of surfactant. It is essential to prepare vesicles at a temperature above the transition temperature of the non-ionic surfactant being used in the formulation.

When the surfactant molecules are kept in contact with water, there are three ways through which lipophilic chains of surfactants can be transformed into a disordered, liquid state called lytorophic liquid crystalline state (neat phase). These three ways are increasing temperature at kraft point, addition of solvent, which dissolves lipids and use of both temperature and solvent. Neat phase or lamellar phase contains bilayer arranged in sheets over one another within dominant aqueous layer. The liquid crystalline proniosomes or proniosomal gel acts as a reservoir for transdermal delivery of drug. The transdermal patch involves aluminum foil as the backing material along with plastic sheet (of suitable thickness stuck to the foil by means of adhesive). Proniosomal gel is spread evenly on the circular plastic sheet followed by covering of nylon mesh.

Mechanism of action of proniosomal gel

Skin has a very tough diffusion barrier that is lipid bilayer in the stratum corneum inhibiting penetration of the drug moiety which is the rate limiting barrier for penetration of drugs. Vesicular systems (Liposomes and niosomes) are promising system to cross this permeation barrier but their major drawback is their unstability which can be overcome by using provesicular approaches that is proniosomes. The delivery system not only enhances the delivery of active agent through skin but also controls the rate of release.

Mechanism of drug transport through skin

As studies performed on the transdermal/topical application of vesicles have rendered conflicting results. It is still not clear which factors influence the vesicle–skin interactions and play an important role in determining the efficiency of drug transport through the skin. But it is clear that when proniosomes applied to the skin they get hydrated and form niosome vesicles. When vesicles come in contact with stratum corneum aggregate, fuse and adhere to the surface of cell. It is believed that this type of interaction leads to a high thermodynamic activity gradient of the drug at the interface of vesicle and stratum corneum, which is the driving force for penetration of the lipophilic drugs across the stratum corneum. 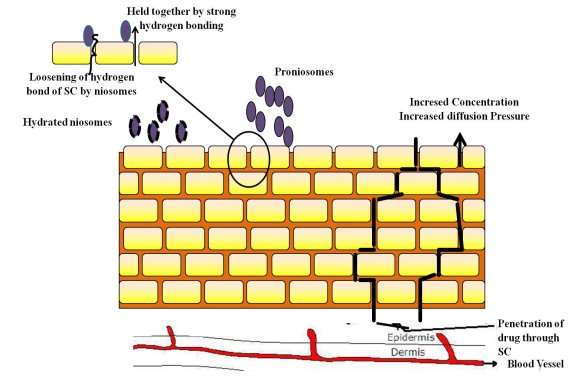 Preparation of proniosomal gel is mainly accomplished by coacervation phase separation method. Proniosomal gel preparation is based on the fact that when surfactant and other components are dissolved using an organic solvent with the aid of heat, and limited concentration of hydrating medium is added. Limited hydration medium enables formation of gel instead of dispersion. Accurately weighed or required amount of surfactant, carrier (lecithin), cholesterol and drug can be taken in a clean and dry wide mouthed glass vial (5ml) and solvent should be added to it. All these ingredients have to be heated and after heating all the ingredients should be mixed with glass rod. To prevent the loss of solvent, the open end of the glass vial can be covered with a lid. It has to be warmed over water bath at 60-70oC for 5 minutes until the surfactant dissolved completely. The mixture should be allowed to cool down at room temperature till the dispersion gets converted to a pronisomal gel.

Liposomes and niosomes are well known drug/cosmetic delivery systems. But these delivery systems have been reported to have many disadvantages in terms of preparation, storage, sterilization, etc. The disadvantages of liposomes and niosomes as their special storage and handling conditions, sedimentation, aggregation, use of unacceptable solvents in the preparation etc. can be overcomed by proniosomes. Liposomes and niosomes are dispersed aqueous systems and have a problem of degradation by hydrolysis or oxidation but there is no such condition with use of proniosomal gel. Further proniosomal gel formulations avoids hudrolysis of encapsulated drugs, thus limiting the shelf life of dispersion. Entrapment of both hydrophilic and hydrophobic drugs can be done with use of proniosomal gel. These formulations shows controlled and sustained release of drugs due to depot formation. These formulations are biodegradable, biocompatible and non immunogenic to the body.

Application of topical formulation onto or through skin requires a non toxic, dermatologically acceptable carrier, which not only control the release of the agent for prolong action but also enhances the penetration to the skin layer. Previous studies indicated that boswellic acids have low oral bioavailability because these are lipophilic nature and not solubilises into the intestinal fluid thus limiting its systemic availability. High first pass metabolism also plays a crucial role in limiting the systemic availability of BAs. As it is well known that topical formulations enhances the delivery of lipophilic drugs and also bypass the first pass metabolism which increase the systemic availability of these drugs. Proniosomal gel is promising delivery systems for delivering the actives through skin via different formulations of drugs. This delivery system not only enhances the delivery of active agent through skin but also controls the rate of release. A wide variety of active agents of different therapeutic functions were formulated into proniosomal gel delivery system. Proniosomal gel carrier system entraps not only hydrophilic but hydrophobic agents also. There is great scope for boswellic acids to be incorporate in the proniosomal gel delivery system. By combining the emulsifying action of phospholipids with BAs, the drug and lipid complex provides enhanced bioavailability and improved pharmacokinetics.

Proniosome gel system is a step forward to niosomes, which can be utilized for various applications in delivery of actives at desired site. Proniosomes are easily hydrated using aqueous phase or by skin itself if used topically. Their incorporation into base gel/cream/ointment along with other ingredients leads to form a stable dosage form. These cosmetic formulations can be used for topical/transdermal applications for various functions. Proniosome gel has an affinity towards biological membranes which helps in enhancing the permeation of actives through skin. Studies on proniosome gel formulation indicate that it has become a useful dosage form for drug permeation into the skin, especially due to their simple, scaling-up production procedure and ability to modulate drug delivery across the skin. There is a strong need for exploring the proniosomal delivery systems for cosmetics, herbal actives and nutraceuticals. Use of proniosome in the boswellic acid formulation will lead to prolong action, better absorption along with many advantages.