Abstract— A covalent bonding between a protein moiety and DNA molecule forms a DNA protein crosslink (DPC). Previous work on DPC’s has attempted to identify the specific proteins and create optimized techniques for their isolation to use in proteomic studies. Our experiment involves reproducing the K-SDS assay for DPC determination using exfoliated squamous epithelial cells (Squames) found in human saliva, and establishing DPC ratio within individuals of the same age group in a population to ascertain their possible role as a biomarker in conditions such as Oral sub mucous fibrosis (OSF).

DNA protein cross links have been known to occur along with single stranded breaks in cultured buccal epithelial cells and they have been investigated to study oral cancer growth in quid chewers[1]. Assays on DNA protein cross links have tried to establish the exact amount of covalently bound protein to DNA. By knowing the nature and amount of protein bound to the DNA it’s possible to determine the role of DNA-protein cross links.DNA of eukaryotes has the involvement of more proteins for controlling gene expression and protein synthesis pathways. So it is our assumption that certain protein moieties are bound to the DNA of Squamous epithelial cells which we have extracted.

DNA-protein crosslinks have been observed along with single stranded DNA breaks. Since DNA-protein crosslinks have been increasingly linked to heavy metal exposure[2,3] and Betel quid chewing it would be a good choice for a potential biomarker. However, this requires in depth research and understanding of the very nature of the crosslinks formed and it has not been validated in any former studies. We question the link between DPCs present in saliva and its association with pre cancerous conditions in the oral cavity.

epithelial cells have been the less common choice. It was our choice to proceed with salivary epithelial cells and check the sensitivity and reproducibility of a previously performed assay[4,5] to determine if similar results would arise with a different cell type and without external stimulation to establish a DNA standard for normal salivary cells.

*Authors have equal contribution towards article

We determined the A260 absorbance for all the samples to ensure sufficient amounts of DNA was present in the cells. We assumed 1O.D = 50 ug/ml and calculated concentrations of DNA accordingly. We obtained values ranging from 1.0-2.3 ug/ml from which we inferred that DNA was relatively pure without interference from external sources and the protein contamination in samples was deemed insignificant.

Samples were taken to perform a cohort study from 40 individuals (n=40) out of which 22 were male and 18 female of age group 22 +3.Informed consent was obtained from all the subjects prior to experimentation. They did not consume food 2 hours prior to swishing.

25ml of 10X PBS buffer was swished 40 times on either side of the mouth for approximately 45 seconds and dispensed into two 15ml centrifuge tubes. They were centrifuged at 1500 rpm for 10 minutes. Supernatant was discarded taking care that the pellet is left undisturbed.

To the pellet 0.5ml of lysis cocktail* was added and incubated overnight at -70 0C. The samples are thawed at room temperature and dispensed through a 21 gauge needle 4 times to facilitate minimal foaming. 0.5ml of 100 mM Kcl,20 mM Tris-Hcl each were added to the samples and vortexed for five seconds at the maximum speed.

Samples were then heated in a boiling water bath for 10 minutes at 65 degrees. Its then carefully inverted 3 times and placed on crushed ice in an ice box for 10 minutes. They were centrifuged at 9000 rpm for 5 minutes at 4 0C.The supernatant was discarded and to the pellet 0.5ml of 100 mM Kcl, 20 mM Tris-Hcl was added. The washing, heating and centrifugation steps were repeated twice.

To expose the proteins from DNA we divided each sample in to 2 aliquots of equal volume. To the second tube 50 micro liters of 4 mg/ml BSA was added and placed on ice for 30 minutes. Both aliquots were then centrifuged at 10,000 rpm for 10 minutes at 4 0C.The supernatants of the individual aliquots of both sets of tubes were taken in 2 ml microfuge tubes without disturbing the pellet.

Hoechst 32258 dye solution was prepared from a 1X stock solution by adding 30 micro liters to 100ml of 1X TNE buffer.1ml of the freshly prepared Hoechst solution is added to 1 ml of each aliquot in the microfuge tubes and mixed. The dye addition took place in a dark chamber and was left undisturbed for 10 minutes. For the readings, Jasco spectrofluorimeter FP-8200 was used. Excitation wavelength was set at 365 nm and emission wavelength at 440-600 nm in order to cover a wider range. The samples of both sets of aliquots were loaded into the cuvettes and readings were taken separately.

DNA concentrations of the 22 male and 18 female controls were calculated as follows,

Note: Subset 1 refers to the samples without

BSA addition whereas subset 2 has the 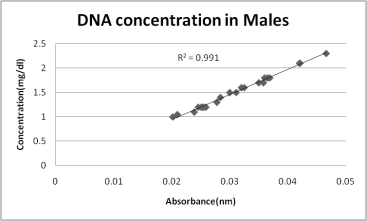 Fig. 1.The scatter plot represents DNA concentrations of Male subjects measured with absorbance at A260.R2 value is represented in the graph 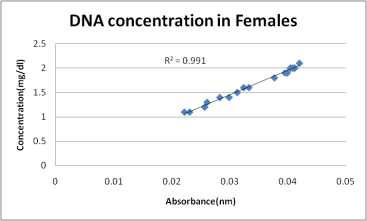 Fig.2.The scatter plot represents DNA concentrations of Female subjects measured with A260 absorbance.R2 value is denoted in the graph 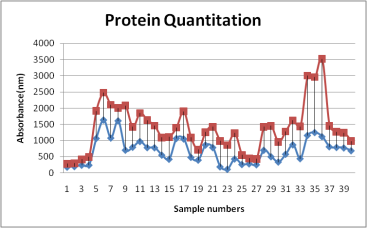 Fig3.Subset 1 and 2 are represented in X-axis with their respective absorbances in Y-axis. Subset 2 shows a marked increase in DNA concentration and contains 4mg/ml BSA addition.

Normalization of the 40 control samples was calculated as 0.4+0.5. It was done to check the correctness of the experiment and to reduce the redundancy of sample measurements.

DPCs have been established as an indicator of DNA damage in body cells. Its concentration is known to be particularly high in cases involving formaldehyde interaction, heavy metal exposure, betel quid chewing and cells showing high levels of oxidative stress. Most of the current work involves studying specific populations showing DNA-protein cross-links or inducing them through various means to investigate their nature. [6]

Our experiment showed similar DNA concentrations in male and female subjects. We concluded that there was not much statistical significance in the amount of DNA extracted from normal individuals of same age group. [7] A two-fold increase in DNA content was observed in samples which were treated with BSA as opposed to samples which had no BSA. This is further proof to existing studies of DNA-BSA interactions.[8]BSA is a complex protein that has specific binding sites for a variety of metallic complexes[9] and stimulants.BSA is a model protein which is very similar to Human serum albumin(HSA) present in the human body. We can make an assumption that there has been precipitation of DNA due to the external addition of BSA. Further studies have to be made with clinical samples to see whether similar precipitation of DNA occurs with BSA treatment.

If the assays involving the quantification of DNA-protein interactions are perfected they could successfully be used as biomarkers for cancer research and chemical exposure specially to denote pre cancerous conditions. Our study aims to standardise the K-SDS assay in squamous epithelial cells taken from the oral cavity of normal individuals. We will be further comparing these results against areca nut chewers. We will be investigating whether or not chewing induces the formation of DPCs in such individuals. This will give insight for the use of DPC as a biomarker for cancerous conditions such as OSF and areca nut as an oral cancer stimulant.

We have encompassed samples representing both male and female individuals so that there is no bias in sampling and reproducibility of the assay is achieved. Sample collection is simple and storage is possible up to a limited period of time. The method is rapid and relatively inexpensive.

We would like to express our gratitude towards Dr. Anbalagan and Dr. Bhaskar Mohan Murari, Center for biomedical research, VIT University, Vellore for proving us with the essential chemicals for our work. We would also like to extend our regards to the individuals who contributed their samples towards our study. We would like to humbly acknowledge Professor P K Suresh of VIT University for encouraging and guiding us through every step of this study.