A DNA database can be defined as a databank of DNA samples which can be used in the analysis of genetic diseases, genetic fingerprinting for criminal cases and genetic genealogy. The DNA profiles held in these databases are stored electronically. These databases have proved to be very useful in the conviction and exoneration of suspects in criminal cases as well as providing a means of identification in the cases of mass disasters. The creation of these databases in different countries is outlined in the table below: 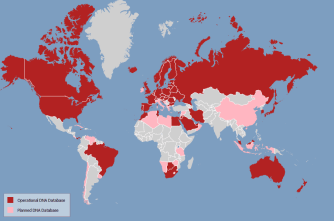 Looking at the conviction rates attributed to DNA evidence over the past number of years, it is obvious that they are very useful. Looking at ten EU countries (table 1 below), their population size, and the number of samples taken by December 2011, it can be seen that these databases are vital in criminal investigations.

The Type of Technology Used

When biological samples are collected and sent for analysis, they are firstly amplified using Polymerase Chain Reaction (PCR). This allows for minute quantities and/or degraded samples to be analysed. Certain regions within the genome known as Short Tandem Repeats (STRs) which are found in non-coding regions are focused on. These STRs are composed of short units of DNA usually 4 or 5 bases long. These locations are used as the ‘chemical letters’ of the DNA are known to be repeated a different number of times in different people. During the PCR process, fluorescent dyes are attached to each of these STR copies (a different dye for each STR). This allows for them to be distinguished. The DNA fragments are then separated by size through the use of capillary electrophoresis, from which the number of repetitive units at each site can be calculated. (grow, 2011)

In order to acquire a DNA match, the number of copies at each STR location must match that of the unknown sample. Different countries use different numbers of locations with the USA using 13 STR loci. Below in fig. 2, it shows how the bands from DNA samples will match: 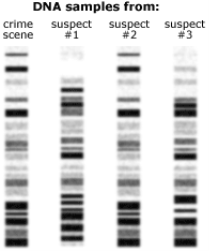 As can be seen from the above figure, suspect two is an identical match to the crime scene sample. The reason for using multi STR loci is to eliminate the possibility of a false match.

STR analysis can also be used for the identification of military casualties, however another method in the identification of mass disaster victims is through the use of lineage markers. Lineage markers are also used in the case of mass disasters. Mitochondrial DNA markers are used to determine maternal linkage, and similarly, Y chromosome markers are used to determine paternal linkage. These are useful as they are passed from generation to generation without change except in the case of mutations. (University of Vermont)

The number of loci used in investigations

In the USA, 13 STR loci are used plus the X and Y chromosomes as illustrated in fig. 3 below: 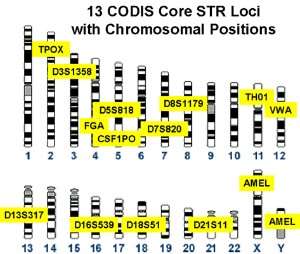 The reason for using 13 STR loci when other countries use less, is due to the fact the more locations tested, the higher accuracy of the match. The table below outlines the different loci used in different countries:

The loci listed in the above were not always the standard, however all countries are now required to follow the ESS (European Standard Set) or majority thereof. Similarly, in order to allow for international database cooperation, the Interpol Standard Set of Loci (ISSOL) is now equal to the ESS. These standards are required as in the past the main problem with cooperation between countries was that different loci were looked at which resulted in the inability of different laboratories to compare DNA profiles. (Gill, Fereday, Morling, & Schneider, 2006)

The legislation associated with the DNA databases is different for most countries. The table below outlines the main differences amongst countries such as the entry criteria of database samples, and the removal of entries from the database.

The number of profiles held on the database

The number of profiles held on national databases varies dependent on the entry criteria, retention time and removal criteria as well as the overall population size. Table 4 below shows the database sizes for 4 countries.