A DISTINCT SERUM PROTEIN PATTERN IN PATIENTS WITH PARANOID SCHIZOPHRENIA[A1]

The proteomic approach, namely, a combination of 2D gel electrophoresis and matrix-assisted laser desorption ionisation time-of-flight mass spectrometry, is a powerful tool that allows researchers to identify proteins that are differentially expressed in disease states. Schizophrenia is a chronic mental illness, whose aetiology is still unclear; therefore, information about differences in serum protein patterns may improve the understanding of the pathophysiology of schizophrenia.

Although in recent years, great progress has been made in reducing mortality and in the treatment of common illnesses such as cancer and cardiovascular disease, the mortality caused by mental disorders remains unchanged [1]. Schizophrenia is a chronic mental illness, whose aetiology is still unclear. Schizophrenia is characterised by hallucinations, delusions (positive psychotic symptoms), affective problems [A3](negative psychotic symptoms), and cognitive dysfunction [2]. A number of hypotheses have been proposed about the pathogenesis of schizophrenia, for example, aberrations [A4] in the pathways of transmission of neurotransmitters dopamine and serotonin [3, 4] or pathological changes in embryonic neurogenesis owing to variations in gene neuregulin-1 [5], as well as oxidative-stress-mediated cell damage due to lowered levels of antioxidant defence enzymes in patients with schizophrenia[A5] [6]. Such pathogenesis may be caused by a dysfunction of some enzymes (proteins) as well as changes of their quantity in the blood of these patients.

At the same time, there is no information about differences in serum protein patterns that can be used for typing of psychopathologies among individuals at risk of developing psychiatric disorders [7]. Diagnosis and nosology rely on symptoms and accumulated clinical observations, and thus far, have been based mostly on interviews with patients and on patients’ subjective complaints [8]. Moreover, current medications still have substantial adverse effects and/or require weeks for therapeutic effects to manifest themselves; not all patients respond to current pharmacotherapy [9]. In sum, an insufficient understanding of psychiatric disorders at the molecular level and the lack of disease-specific changes in serum protein patterns prevent optimisation of diagnosis and treatment of such complex psychiatric disorders as schizophrenia [A6].

The proteomic approach, namely, the combination of 2D gel electrophoresis and matrix-assisted laser desorption ionisation time-of-flight mass spectrometry (MALDI-TOF MS), allows researchers to reliably identify proteins isolated from human bodily fluids [10, 11]. Our exploratory study [12] showed that 2D gel electrophoresis is suitable for isolation of proteins from blood of patients with mental disorders. Therefore [A7], in the present work, clinical blood samples from patients with a diagnosis of schizophrenia were tested to identify quantitative differences in the proteomic profile of serum.

In this study, we examined blood serum of healthy people and patients with paranoid schizophrenia to search for quantitative and/or qualitative differences in proteins associated with this mental disorder. The use of 2D gel electrophoresis enables researchers to simultaneously isolate more than 300 protein spots on one gel containing 150 µg of protein for subsequent MALDI-TOF MS/MS analysis [10, 11]. We analysed differences in serum protein patterns by comparing the gels between the patients and healthy controls. The analysis [A8] of protein patterns in serum was focused on those protein spots that differed in 2D gels between the patients and healthy controls. Such protein spots were analysed by means of the Gel-Pro Analyzer software and normalised to the sum of three proteins (a, b, Ñ; for details, see Materials and Methods). These three proteins are isoforms of apolipoprotein L (ApoL) [18]. As a result, 15 protein spots were isolated and identified by peptide mass fingerprinting and MS/MS analysis. The list of proteins identified in the NCBI database is shown in table [A9]1. Some proteins – haptoglobin, transthyretin (TTR), and apolipoprotein C3 – shown in table 1 are present in more than one spot on a gel and have different pI values. Perhaps this phenomenon is due to various post-translational modifications or partial processing.

It was found that only the serum level of ApoA4 was increased (1.8-fold) as compared to the control group (figure 1a). Our findings support other [A10] reports on altered protein levels in serum and cerebrospinal fluid in schizophrenia [19, 20].

The decrease in the serum concentration relative to the control group was observed for ApoC3 and for ApoC2 in patients with schizophrenia (figure 1b). This downregulation was on average from 1.8- to 3-fold for ApoC3, and smaller for ApoC2: only 1.25-fold. These proteins are synthesised in the liver and are components of very low-density lipoproteins (VLDLs). Apolipoprotein C2 activates extrahepatic lipoprotein lipase, whereas apolipoprotein C3 can inhibit lipoprotein lipase 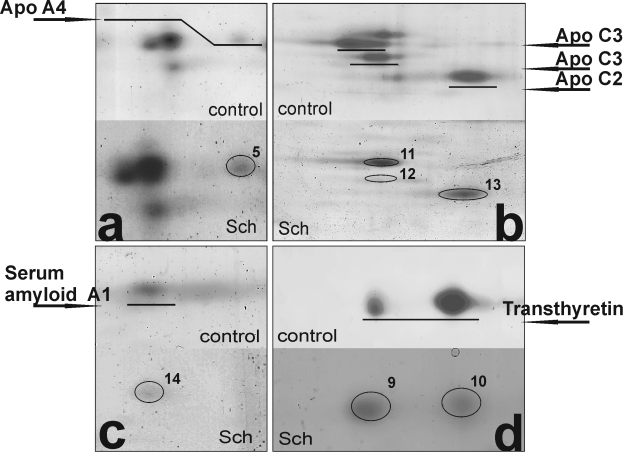 Fig. 1 Examples of proteins with differential expression in human serum are presented in the enlarged sections of the 2DE profile. a) Apo A4; b) Apo C3 and C2; c) serum amyloid A1; d) transthyretin (the protein is present in two spots because of post-translational modifications). Sch: schizophrenia.

and activate LCAT [21, 22]. Previously, it was found that the expression of apolipoproteins is altered in schizophrenia, bipolar disorder, and other psychiatric disorders [23]. The authors found that low-density lipoproteins (LDLs) and VLDLs are the most prominent factors differentiating depressed patients from healthy controls, and that plasma unsaturated lipid concentrations are elevated in the depressed group. Thus, there is growing evidence that deregulated lipid homeostasis may play a common role in the pathophysiology of psychiatric disorders such as schizophrenia.

Other proteins with a decreased concentration are serum amyloid A1 and TTR (figure 1c and 1d). Inflammatory amyloid A1 is among the so-called acute phase proteins, which have both direct and indirect bactericidal and/or bacteriostatic properties. According to the classical theory of inflammation, in the acute phase of inflammation, the serum concentration of amyloid A1 increases 100- to 1000-fold [24], whereas in our study, we observed a 2.3-fold decrease in the serum concentration of this protein in patients with schizophrenia. Perhaps this result [A11] is due to decreased immunity in

Table 1. The list of proteins from human serum analysed by 2DE and identified by MALDI-MS/MS after in-gel digestion with trypsin.

The fold change is equal to SPi/SPcontrol, where i is the identification number of a spot. Symbols “-” and “+” mean a ‘decrease’ and ‘increase’, respectively. Sch: schizophrenia.

patients with psychiatric disorders or to the presence of comorbidities. In addition, [A12] it is possible that a decrease in serum amyloid A1 concentration is related to downregulation of antioxidant-defence enzymes in patients with schizophrenia [6] because high-density lipoproteins (HDLs) inhibit oxidative modification of LDLs via the activity of their associated enzymes and apolipoproteins [25]. If HDLs become so-called “dysfunctional HDLs” because of accumulation of oxidants derived from an inflammatory reaction, such HDLs inhibit the HDL-associated antioxidant enzymes and reduce the ability of apolipoproteins A1 to promote ABCA-1-mediated cholesterol efflux [25]. In the literature, there are data on a strong positive relation between cholesterol levels and pathophysiological features of mood disorders. The link between mental health (brain) and cholesterol is believed to be based on hypothetical neuron-associated mechanisms. Cholesterol is an integral component of the plasma membrane of neurons and is present in myelin. Furthermore, cholesterol performs crucial functions in the development, stability, and workings of the synapse [26]. Overall, aberrations in cholesterol in a psychiatric illness may substantially affect the mood via synaptic stability and lowered serotonergic activity.

In the case of TTR, we observed a decrease in the serum concentration of its dimer and one of monomeric forms (protein 10 in Table 1) among the patients with schizophrenia (~1.7-fold and ~1.5-fold, respectively), whereas the serum level of another TTR monomeric form was found to be unchanged relative to the control group (protein 9 in Table 1).

TTR is a liver-derived secretory protein and is the major serum carrier of thyroid hormones: thyroxine and tri-iodothyronine. TTR is also involved in the transport of retinol via an interaction with retinol-binding proteins. Several studies were conducted in an attempt to identify disease biomarkers that could advance the understanding of the pathogenesis of schizophrenia. In some of these studies, a link between TTR and schizophrenia was found [27, 28]. In ref. [28], it was estimated that 3% of TTR in ventricular cerebrospinal fluid [A13] and 10% of TTR in lumbar cerebrospinal fluid are derived from blood. To assess the involvement of blood TTR in the changes observed in the cerebrospinal fluid of patients with schizophrenia, those authors also studied serum TTR levels in the same people (simultaneously with cerebrospinal fluid collection) by an ELISA. They observed a significant moderate decrease in TTR concentration in serum samples of patients with schizophrenia compared to controls. Nevertheless, there was no association between cerebrospinal-fluid and serum TTR levels in the same individuals, indicating that the protein levels of TTR are regulated by different systems in serum and in cerebrospinal fluid.

Competing interests. The authors declare that they have no conflicts of interest related to the contents of this article.

Please don’t forget to update the title in all supporting documents and correspondence.

It often happens that after the language editing, coauthors make additions to the manuscript; also, some of the corrections are rejected. As a result, the manuscript that is submitted to the journal may contain 5-10 new errors. My advice is to send me the manuscript for a quick check on the day of the submission to the journal. I can use the automatic “compare documents” function of Word to find all new changes and to correct them quickly. I will also issue a certificate after this final check, and you can insert the sentence (optional) “The English language was corrected and certified by shevchuk-editing.com.” into Acknowledgments.

[A2]Please do not include keywords that other researchers are unlikely to use when searching for articles.

[A4]Please be careful with the words abnormal and abnormality when referring to a person’s health status because they may be insulting to patients.

[A5]Please note that this is a more polite form.

[A6]Please avoid creating unusual abbreviations and single-word abbreviations because they make a text harder to read (well-known abbreviations such as DNA and official gene symbols are OK). The only valid reason for creating an abbreviation is the following: a long multiword expression (4 or more long words) that occurs more than 4 times in the text. Even in this case, it is better to avoid abbreviating. It is easy to write in abbreviations but it is difficult to decipher such a text.

[A7]Please avoid creating long sentences because they are hard to read.

[A10]Please keep in mind that the word “previous” is redundant in this context because all published studies are “previous.” It is OK to say “previous” when you discuss your own earlier studies.

[A11]Please don’t use the words “which” or “this” as a substitute for the whole sentence or a statement. This usage is vague and confusing because some people will think that “this” or “which” refers to the last word, not the whole statement. Therefore, it is better to use a descriptive phrase instead.

[A12]It’s not a good idea to start a sentence with such words as and, but, also, or, so in a formal text.

[A13]Please don’t create abbreviations at the end of the article, after the full form was already used many times.