Skin is the largest organ of the human body. It comprises of two fundamental layers – the epidermis and the dermis. The surface layer is known as the epidermis and it is made up of a number of sheets of skin cells. Beneath the epidermis, the dermis layer is found which consists of elastic fibres (elastin), and protein fibres (collagen). Elastin provides the skin with suppleness, and collagen gives the skin its strength. Several other parts such as sebaceous glands, hair follicles, and blood vessels are also embodied within the dermis. Our skin has two very different functions to perform. It has to be soft to allow movement, but at the same time it should be tough enough to prevent breaking or tearing. Its texture and thickness differ greatly from one part of the body to the other. Despite being tough, our skin is the biggest and most frequently damaged organ of our body. Since it is the outermost layer of our body it is in constant contact with the external world. And, in that process, it gets wounded.

The two main categories of skin wounds are abrasions and incised wounds/cuts. Cuts are generally caused by sharp edges or objects. Sharp objects can cut through the surface of the skin making it to split. Apart from sharp objects, cuts can also be caused by accidents, sports injuries and fighting. Small cuts usually heal faster than the serious cuts and do not require more attention. On the other hand, abrasions, (also known as grazes) are caused by friction between the skin and another surface. Abrasions are generally caused by falling on a rough or scratchy surface.

To heal these cuts/abrasions, our body undergoes the process of “Wound Healing”. It is a complex process which involves formation of new cellular structures and tissue layers at the site of wound. The wound healing process comprises of three phases (as shown in Figure:1), namely — inflammatory, proliferation, and remodelling1. Soon after a tissue injury via an incision, the very first reaction is bleeding. Immediately after bleeding, coagulation process commences and leads to the formation of a scab. 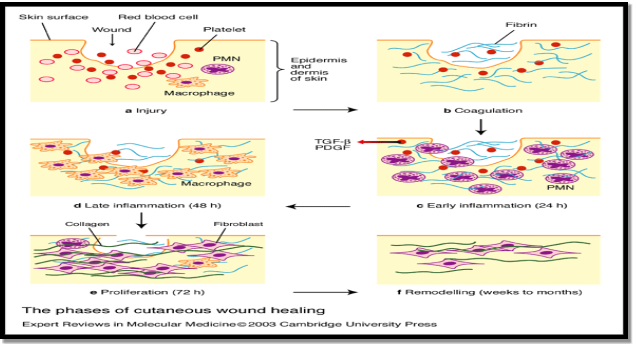 In Inflammatory Phase – the body immediately recruits fluids containing plasma proteins, blood cells and antibodies at the wound site which leads to swelling, pain, and redness around the wound site. Various immune cells such as neutrophils and macrophages are also recruited at the injury site to clean, and ready the injury site for healing process. This phase lasts 2 to 4 days after the injury. In Proliferation Phase – the body begins to work on repairing the injury. Fibroblasts enter and start to gather in the wound. The tissues at the injury site will continue to grow until the wound is healed. This newly formed tissue contains the new blood vessels and other components to fill in the damaged tissue. By about day 5, an exudate starts to appear in the wound, which is the by-product of healing. At last, the Remodelling and Maturation Phase begins in which remodelling of the collagen fibers starts. Nerve endings start to re-grow and the tissue starts to rearrange itself.

Who are the current users?

The adhesive bandages are suitable for all age groups. In everyday life, everyone gets small cuts/abrasions. The most important feature of the current technology employed in adhesive bandages is that it is available over the counter, i.e. people don’t need a prescription to buy these bandages. While people from all the age groups use the adhesive bandages every now and then, Children continue to be the major end-users.

According to the U.S. Adhesive Bandages Market report2 (U.S. Adhesive Bandages Market; ID:365799; Frost & Sullivan), published in 2008, about 70 percent of the total adhesive bandages in the United States are used on children, thereby making their parents and caretakers the primary adhesive bandage consumers. An increasing in the usage of these bandages has been observed over the last decade owing to the fact that nowadays, parents encourage their kids to participate in various recreational activities. In doing so, probability getting minor cuts or abrasions also increases and simultaneously, it keeps the market for bandages alive. Keeping this in mind, the manufacturers have produced a variety of products which incorporates graphics or eye-catching design such as stickers, tattoos, holograms, glitter and color-changing bandages to attract the “children segment” of the market.

After children, the second major segment of the market comprises of older adults, athletes and post-operative patients. This segment of users has been found to purchase a substantial number of bandages, mainly high-end adhesive bandages. In case of older adults, skin tear is found to be a common problem (Robert, 2007). Aging reduces the ability of the skin to recover from wounds quickly. It is because of the decreasing strength of skin collagen and elastin proteins which are major components of the wound healing process3 (Battersby L., 2009). In case of post-operative patients, surgeons sometimes use adhesive bandages to close smaller cuts/incisions. These bandages hold the wound together and help in quicken the healing process. Similar to children, athletes are more prone to small injuries during their rigorous physical activities. Since nowadays, people are becoming aware about their health, a significant number of people have jogging in their daily routine. These factors have contributed towards the growth of plaster’s overall market and people from these various groups currently form the market for adhesive bandages.

The other important factor that has been observed in the usage of adhesive bandages is it’s being “seasonal”. It has been noticed that a higher number of bandages are purchased and used during the warmer months because during that time people, mainly children and athletes, are more likely to get injured from outdoor activities.

What are the current core user needs?

The second need of the user which the bandages satisfy is the ability to self-treat small injuries. When there is a small cut or abrasion, the bandages can be used to stop the bleeding and to stick the ends together. It eliminates the need to visit a doctor and saves a significant amount of money of the user. They are handy to use and comes in different variations such as butterfly plasters (to hold the wounds better around fingers, toes or palms), elastic plasters (to cover the wounds around joints) etc. They are available over the counter to buy and do not require any specific medical-prescription, which again saves a lot of trouble to the users.

The third and also a very important factor is the “cost” of the adhesive bandages. The price of the bandages has been reduced significantly after they were first introduced into the market in 1920s. Users always prefer an inexpensive product and adhesive bandages perfectly fit into that category. At present, a box of adhesive bandages can be bought at a price between €2.83-€7.30 (from the source: http://www.flemingmedical.ie/Elastic-Adhesive-Bandage-Medicare-25mmx45cm), depending on the number of strips and quality of the strip in that box.

Overall, these small medical devices fulfil their purpose and have been a constant part of everyone’s life since 1920.