Isolation and optimization of cultural conditions for exopolysaccharide production from Blue Green Algae.

Polysaccharides are renewable resources representing an important class of polymeric materials of biotechnological interest. They offer a wide variety of potentially useful products to mankind. Extracellular polysaccharides of microbial origin are of interest due to their novel functionality, reproducible physio-chemical properties, stable cost and supply. Cyanobacteria exhibit high growth rate and are more willing to manipulate conditions for enhancing growth or Exopolysaccharide (EPS) production. When compared to macro algae and higher plants microbial exopolysaccharide has received increasing attention recently due to their potential application as industrial gums, bio flocculants, soil conditioners and bio absorbents. In the present study, blue green algae isolated from Noyyal river in Coimbatore, Tamil Nadu were screened for EPS production by Negative staining. Among the ten isolates screened one isolate identified as Chroococcus sp was found to produce polysaccharide. Optimization of cultural conditions for the production of exopolysaccharide by Chroococcus sp was carried out. The isolate was subjected to mass cultivation in the optimized medium. The exopolysaccharide was extracted. The total carbohydrate and total protein were determined by phenol sulphuric acid method and Lowry et al., method. A yield of 55mg/l of exopolysaccharide was obtained.

Cyanobacteria or Blue-green algae are photosynthetic prokaryotic organisms which are either unicellular or filamentous structures. These organisms are found in both freshwater and marine water environment. Some Cyanobacteria grow in association with certain green algae, liverworts, water ferns, and Angiosperms (Bold and Wynne,1985).

Many cyanobacteria have mucilaginous external layers such as capsule, mucilage, sheath, glycocalyx or slime. These external layers are polysaccharide in nature. There are three types of polysaccharide. A sheath is a thin uniform structured external layer immediately next to the outer membrane that contains either concentric or radial fibres, according to the strains. A capsule or slime polysacchradie layers (CPS) are the more outer unstructured zones and certain soluble polysacchraides (released polysacchraides, RPS) are released by many cyanobacteria into media (Bold and Wynne, 1985; Bertocchi et al., 1990).

In the present study cyanobacterial strains isolated from Noyyal river was screened for exopolysaccharide production. Optimization of cultural conditions was determined and mass cultivation was done using the optimized medium. The exopolysaccharide was extracted. Total protein and carbohydrate content were determined.

The collected samples were initially inoculated into five different 100ml conical flask containing 50ml of BG 11 medium. After inoculation the flasks were incubated at 24+/-2°C under 37.5 µmol-1m-1sec-1intensity with 16:8h photoperiod for 15 days (Dayananda et al., 2010).

Microalgae was isolated and maintained in axenic cultures which are based on serial dilution culture technique and agar plate method as described by Gopinathan (1996). The mixed microalgal cultures were then serially diluted using respective culture medium in which growth was observed. After serial dilution, the flasks were incubated at the above said condition for the purification of microalgae. From the serially diluted flask, the samples were inoculated onto agar plates with 10mg/l of cyclohexamide for final purification process. The pure cultures thus obtained were sub-cultured and maintained.

2.4 Screening of isolated strain for exopolysaccharide production by Negative staining

Negative staining was performed by mixing a 50 µl of algae cultures with India ink dye. After mixing a smear was made with the preparation, air dried and observed under the microscope (45 X objective lens) (Plude et al., 1991). The isolate which showed visible halo around the colonies were subjected to further study.

The isolate was subjected to grow in the optimized medium. The maximum yield of exopolysaccharide at time intervals was determined.

The exopolysaccharide was extracted by adding 12 ml of ice cold ethanol to the medium containing 100ml of grown cells and incubated for 4°C overnight. The exopolysaccharide was precipitated and collected at 10000 rpm for 20 minutes. The pellet thus obtained was dried at 100°C and weighed (Sunil T Pawar et al., 2013). The extraction was done at regular periodic intervals and maximum amount of polysaccharide produced at particular time was determined.

2.8 Estimation of carbohydrate and protein content in extracted exopolysaccharide

A wide range of Cyanobacteria are present in water samples. From twenty water samples, ten Cyanobacteria were isolated in pure form by serial dilution techniques. All isolates were checked for exopolysaccharide production by Negative staining using India ink. It was found that isolate c produced a clear halo around the colonies which indicates the production of exogenous slime layers (Fig 1). By microscopic observation of morphology, the isolate was found to be Chrococcus sp based on David et al., 2011.

Fig 1: a) Microscopic observation of isolate c and b) negative staining of isolate 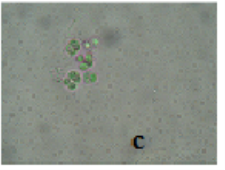 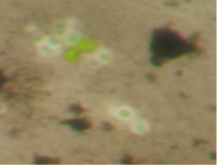 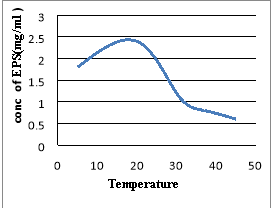 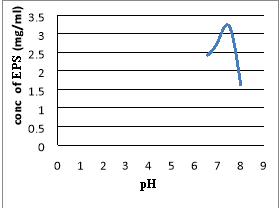 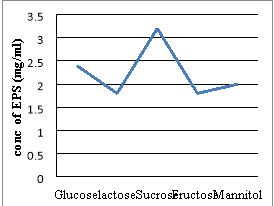 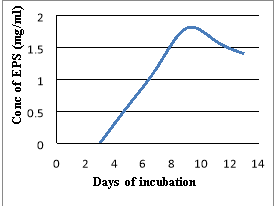 Figure 3: Amount of Exopolysaccharide produced at different days of incubation in the optimized medium. 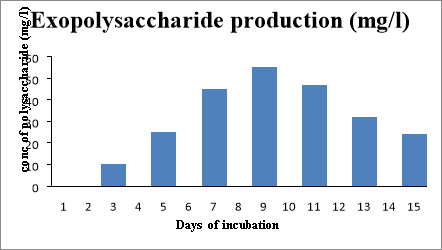 Misra A and Jha B.2009. Isolation and characterization of extracellular polymeric substances from micro-algae Dunaliella salina under salt stress. Bioresource Technology. 100: 3382–3386.

Okutani, K., 1984. Antitumor and immunostimulant activities of polysaccharides produced by a marine bacterium of the genus Vibrio. Bulletin of the Japanese Society for the Science of Fish. 50 : 1035–1037.

Sunil T. P, Amarsinh A. B, Trishala B. G and Tejswini R. N.2013. Isolation, screening and optimization of exopolysaccharide producing bacterium from saline soil. Journal of Microbiology and Biotechnology Research. 3 (3):24-31.