Figure 1. The alignment of chicken anemia virus strain CAT-CAV (Gyrovirus) and its relatives. 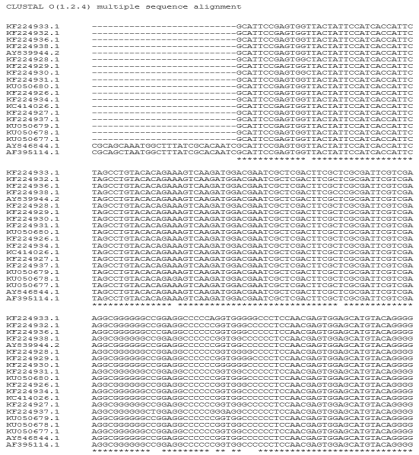 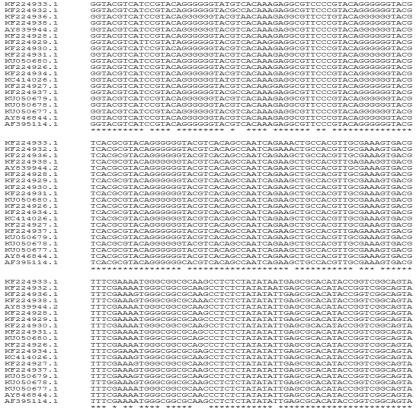 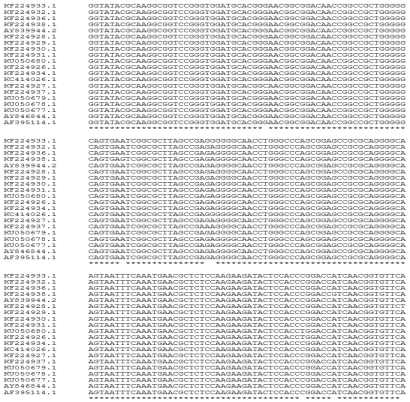 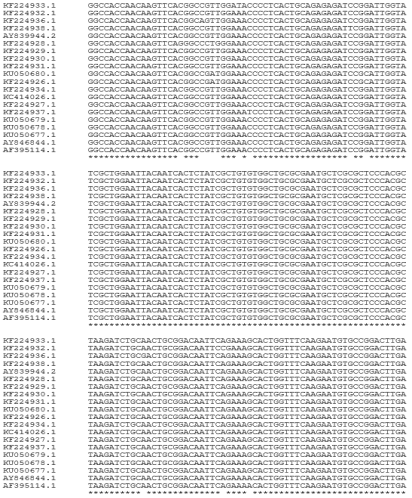 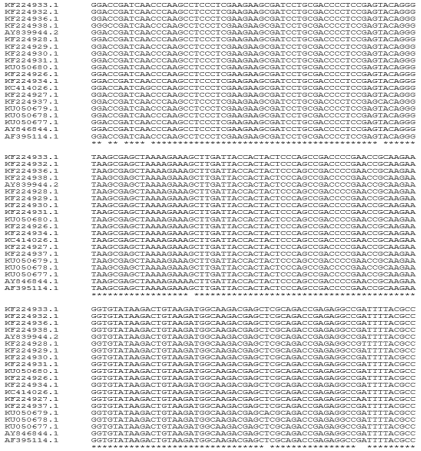 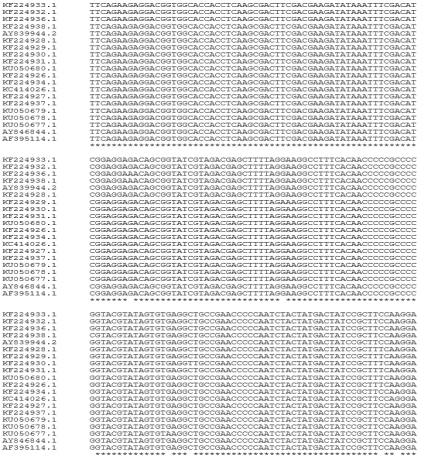 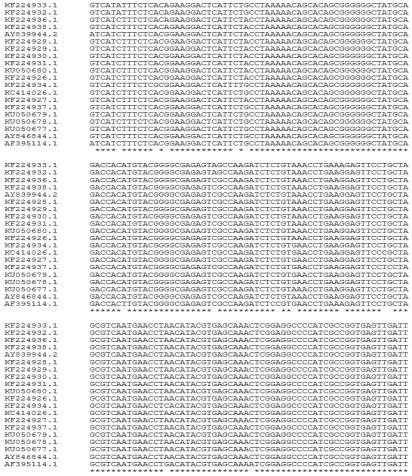 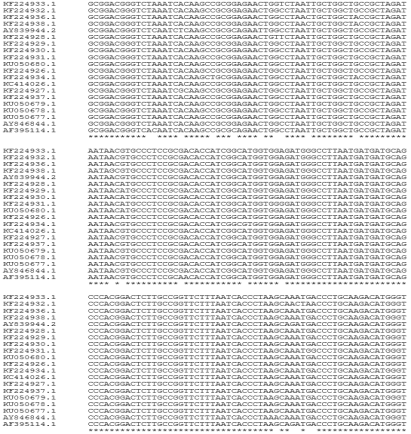 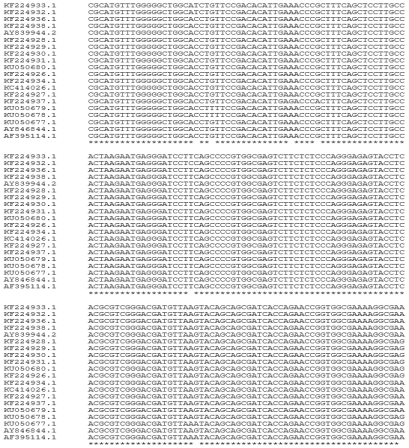 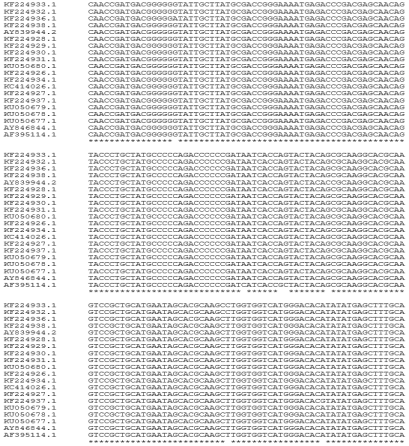 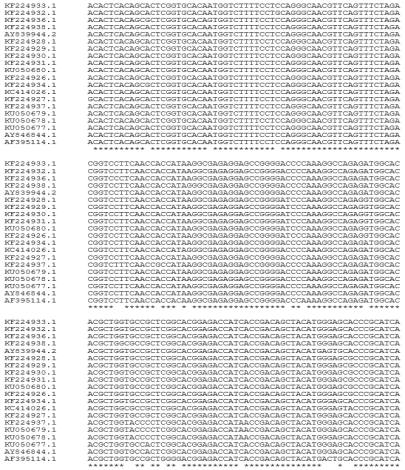 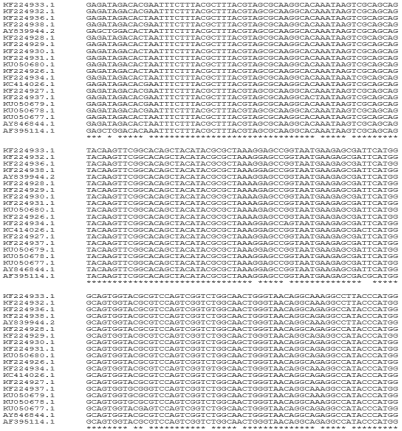 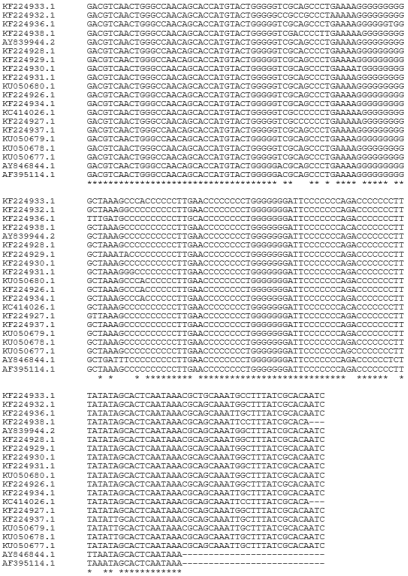 Chicken Anemia Virus strain CAT-CAV is the chosen virus and its 19 relatives are shown. Therefore, 20 nucleotide sequences are involved. 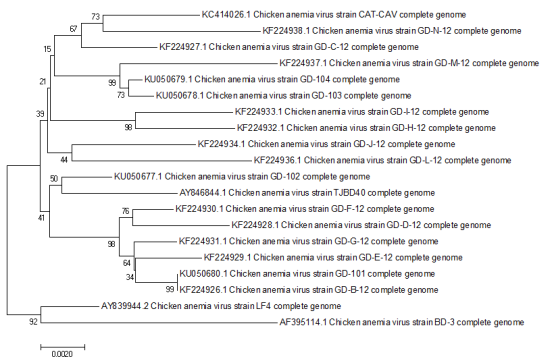 Figure 2. A picture of the phylogenetic tree with bootstrapping values of chicken anemia virus strain CAT-CAV (Gyrovirus) and its relatives.

P distance is used to calculate the p-distance which compare two aligned sequences at a time and build a matrix of all possible sequence pairs. During each comparison the number of changes such as the base substitutions and the deletion or insertion events are counted and showed as a proportion of the overall sequence length. The final estimates of the difference between all possible pairs of sequences are carried out. From the table of pairwise distance matrix, the nearest relative of the Chicken anemia virus strain CAT-CAV is Chicken anemia virus strain GD-C-12 and the p-distance between them is 0.008.

Table 1. The statistics for the length of the alignment, the number of variable and the singleton sites in it.

c) The name of the best substitution model is Hasegawa-Kishino-Yano model (HKY+G). To find the best DNA model, the models with the lowest Bayesian Information Criterion scores define the best substitution motif. The Hasegawa-Kishino-Yano model showed the BIC score of 10009.9 which is the smallest one. Moreover, non-uniformity of evolutionary rates between sites are created by adopting a distinct Gamma distribution (+G) along with 5 rate type. The G value is 0.05 in this model. The estimated value of transition or transversion bias (R) is 1.42 which is according to nucleotide frequencies and base substitutions rate for each nucleotide pairs.

d) The chosen Chicken Anemia Virus was characterized under the genus Gyrovirus in the family of Circoviridae. Gyrovirus is classified by small non-enveloped DNA viruses with negative sense single-stranded circular DNA of about 2298 to 2319 nucleotides in length with three partly overlapping open reading frames which coding for the VP1, VP2, and VP3 proteins (Natesan, S, 2006). CAV is a cost-effective essential pathogen in the chicken industry triggering severe anaemia and immunosuppression in young chicken that have inadequate defensive motherly antibodies. The affected chicken contaminated with infectious bursal disease virus would be exposed to an extensive range of viral and bacterial pathogens because of the immunosuppression. Hence, this infection is determined to be economically important as the clinical disease correlated with vertical transmission and because of its capability for causing immune dysfunction on combination with other pathogens (P. Biagini, 2011).

In this study, a CAV variant was identified by adopting PCR with CAV-based primers in faecal samples of stray cats. The genome of CAV variant was sequenced and the outcomes showed that it could be a recombinant viral strain from parental CAV strains. Recombination is a crucial evolutionary system that lead to genetic diversification. CAV variant is examined that it is originated from the CAV-infected chickens. The pathogenesis of this new virus still have to be explained. This study emphasizes the significance of CAV examination and it demonstrates the evidence inducing the feasibility of CAV homologous recombination in cat.

Chicken Anemia Virus involve many clinical significance, Firstly, CAV proteins can be showed in plants as an substitute for recombinant protein construction in animal cells. Furthermore, the impact of VP3 expression was examined to figure out possible relationship in plants’ programmed cell death. Present expression levels of VP1 is still below standard to be achieved as an oral vaccine, however it can maximizing expression level in plant cells to access recombinant VP1 protein eligible to generate neutralizing antibodies, most probable by expression with VP2, serve as a low cost approach into new, economical vaccines against CAV (Goldbach, R, 2007).

VP2 is established to be a powerful target for debilitation through directed-site mutagenesis and is examine debilitation of viral consequences through adjustment of VP2. This is completely different to the studies which investigating virus establishment mutated in VP3 and also were not replication capable. It is apparent that VP2 has several functions and that directed mutagenesis which sustain infectivity would retain functions essential to replication while adapting functions correlated with virulence (Browning, G.F, 2007).

e) Bootstrapping value represents how well this node is supported in the model which is used to make a phylogenetic tree. Bootstrapping is a procedure where the random subset of data is taken and rerun the analysis of the phylogenetic tree. The value showed the percentage of bootstrap replicates in which the node showed up. From the tree, the optimum tree showed the sum of branch = 0.10012698. The replicate trees percentage in which the joining of taxon in the bootstrap test with 500 replicates are indicated beside the branches. From the tree, the bootstrapping value is less than 50, the branches matching to division reproduced in less than 50% replicates are collapsed. It showed the node is not well supported and it could not show up in all bootstrap replicates.