Covert Considerations to Overt Odors!

Insects, like most biotic organisms, leave a trail of chemical information wherever they travel. Chemical cues are left where they walk, abandoned in their feces, expelled from their mandibles, and deposited from their abdomens. The dissipated chemical bouquets serve many purposes for both the recipients and originators. Semiochemicals can be for the sake of purposeful communication and are often for the benefit of the originator or kin. Unrelated species can also detect chemical cues and interpret them for their own benefits. A close relative may follow its kin’s trail to find a cache of food. Two conspecifics could locate each other for the purpose of mating. An unsuspecting prey may mosey upon the scent of a hungry predator, it would be deterred upon detection. Understanding the interactions of individuals and their chemical environment can reveal much information of seemingly-straightforward behaviors.

Chemoreception is an important sense that occurs in essentially all forms of life. Detecting pheromones or chemical cues is necessary for guiding certain species in their environment. Pheromones serve as important tools that guide the individuals in the Class Insecta through a variety of modes. In honeybees, primer pheromones are important for stability of the hive in terms of hierarchical regulation. Aphids disperse a form of release pheromone alert its kin, who are often clonal, of nearby predators. There are a variety of reasons to study interactions of species in their chemical environments. Exploration of these chemical-insect interactions gives insight to a class of organisms that make up most of the world’s biodiversity. Learning about chemical cues for this species rich group would naturally help us learn a significant deal of the world that we inhabit and improve our quality of ecosystems and life. For example, understanding how certain insects respond to specific chemicals can be discovered and applied to practical fields as in pest management. Likewise, knowledge of these chemical attractants can function in utilization to form traps. These traps would not be as harmful to the environment relative to your standard pesticides.

Chemical cues from feces are perhaps not as intentional as pheromone cues, however, they also share much information and reveal to prey of the possibility of nearby predators (Kats, L and Dill, L 1998.) It is not uncommon for ladybeetles to prey upon others within the same guild and even the same species. These interactions usually favor one species over another (Agarwala.) Intraguild predation within coccinellids has been cited as a likely driver for shifting species ranges (Losey.) Evidently, having the ability to detect and avoid the ‘stronger’ of the intraguild predators would aid the ‘weaker’ in terms of persistence at the species level. Therefore one would expect that the weaker of the predators behave in a way that promotes avoidant behaviors during necessary species persistence actions, such as prior to oviposition and during foraging, if they were to sense fecal matter from the stronger predator. Agarwala et. al hypothesized that oviposition-deterring qualities of the fecal matter would act as a strong deterrent on the smaller and weaker ladybeetle species.

To test this hypothesis on ladybeetle behavior, there were a number of characteristics that Agarwala had to determine about the lady beetles feces. This particular set of interactions were not studied in depth prior to this experiment. As a a result, they needed to observe for both larval and adult ladybeetles: rate of fecal production, location or host plant where fecal production occurs and time that feces naturally remains on plants. Afterward they could use information on feces and record effects of the feces on the ladybeetle’s behaviors with a presence an absence of feces assay. They gathered this data by first making observations on 100 different host plants to ascertain a general location where fecal production occurs. They also collected leaves with feces and feces alone to test on their beetles. They reared beetles from a stock culture and collected feces over a range of dates. Experiments were done in petri dishes or on Vicia faba, fava bean plants, where their aphid prey were normally located. They identified rates of feces deposition by giving a set amount of pea aphids per individual and by collecting feces over a 24 hour period. By similar means, they observed how long fecal remains were likely to remain on an undisturbed plant. Lastly, they used all of this information (and collected feces) to determine the effects of the feces on the varying species located on host places. They used female ladybeetles to find influences on behavior for oviposition and feeding. Treatments ran with heterospecific and conspecific feces-organism set-ups. They recorded the number of aphids eaten and eggs laid by a fertilized female over the course of a 24-hour period. Additionally, they formed a water extract containing the fecal chemicals and established a manipulative assay in order to assess whether it was the chemicals within the feces and not the sight of feces alone that were the deterrent factor.

They obtained qualitative and quantitative results that combine to tell the story. First they found in fields that where aphids infested, fecal deposits co-occurred with a positive correlation. Within this studies’ observations, they detected that the smaller of the species, Propylea japonica occurred more often on the ryegrass host plant while the larger, Harmonia axyridis occurred more often on the hibiscus and mugwort host plants. Across all host plants, the two occurred heterospecifically less than either occurred conspecifically. In the lab studies, they determined that fourth instar larvae of the beetles deposited more feces than the adults (likely due to a less efficient digestive system), and that H. axyridis deposited more feces than P. japonica. The behavioral experiments, with facilitated viewing of results (Fig. 3 and Fig 4.), suggest that females altered their oviposition and foraging as a reaction to the fecal cues of both larvae and adults with one, five and ten day old feces deposits. Overall, the Harmonia were only significantly deterred from 1 day old feces and more so from the conspecific feces. Propylea on the other hand were deterred from both day old and five day old feces, less so from ten day old feces.

Their hypothesis was supported as they found a polarity in the data; the data showed that females of both species foraged and oviposited less around H. axyridis feces than P. japonica. The ‘stronger’ intraguild predator was not as deterred relative to the ‘weaker’ species. Lastly, the water extract of the feces experiment revealed similar results where Harmonia feces was a stronger deterrent for both species, with Propylea feces not significantly deterring Harmonia at all. This could suggest that intraguild predation acts as a driver, leading detection of the more voracious predator from chemical cues to cause deterrent behaviors. The experiments showed… based on important functions that contribute to fitness, such as foraging and ovipositing. Ladybeetles acted this way… 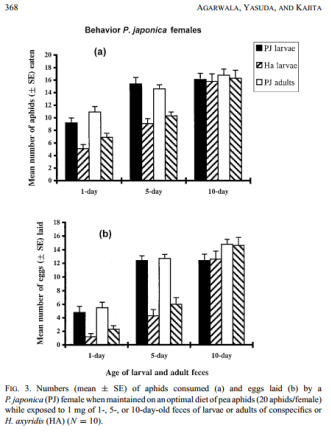 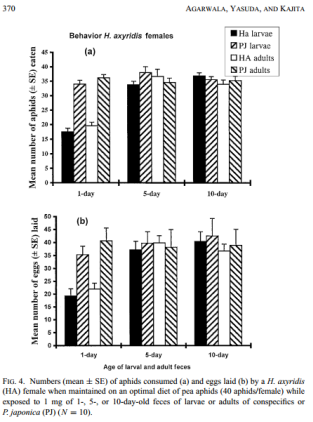