Endothelial progenitor cells (EPCs) were first isolated from human peripheral blood by Asahara et al. in 1997. These were described as a population of circulating cells which displayed properties of both endothelial cells and progenitor cells. (Asahara et al., 1997; Asahara et al., 1999) Accumulating data suggests that these circulating cells play a role in new blood vessel formation changing previous views on endothelial repair mechanism after injury. (Zengin et al., 2006) Prior to this discovery, the emergence of endothelial cells was thought to occur exclusively during early embryogenesis from mesodermal cells called vasculogenesis. (Loges et al., 2004) New vessel formation on adults was thought to arise from existing vasculature in a process called angiogenesis. (Folkman, 1971; Folkman et Shing, 1992) This was a widely accepted paradigm until it was overturned by pioneering worked achieved by Asahara et al. Vasculogenesis is now defined as de-novo formation of blood vessels in adults or post-natal vasculogenesis. This crucially involves EPCs. (Laschke et Al, 2011)

Almost two decades after its discovery, EPCs still remain controversial. Several reports show the potential of EPC as a regenerative tool due to its overlapping phenotypical and functional properties with hematopoietic cells and mature endothelial cells. However, contradicting results has been obtained from in-vivo clinical trials. (Timmermans et al., 2009) Despite of being extensively studied there are still difficulties in characterization, identification and definition of EPCs due to the heterogeneity among the population and the inexistence of a unique identifying marker. (Lee et Poh, 2014). This review will look at the current understanding of EPCs including the subsets that composes the population, the variety of roles they play in neovascularisation, techniques used in defining EPCs, characteristics in-vitro and in-vivo and the attempts to use EPCs as therapeutic and diagnostic tool in clinical trials regardless of the problems in translating research evidence into clinical use.

In general EPCs are a heterogeneous group of circulating cells that can be purified from peripheral blood derived from multiple precursors within the bone marrow. (Lee et Poh, 2014) They express similar cell surface markers to both hematopoietic stem cells and mature endothelial cells with the ability to incorporate into endothelium at sites of ischemia or injury with the ability to restore the biological exclusion barrier. (Urbich et Dimmeler, 2004) Currently, a specific marker for identifying EPCs does not exist however a variety of markers are used to identify cells with the vascular regenerative properties collectively termed as EPCs. Different subsets display different phenotypical features, varying cell surface markers and functions. (Yoder, 2012)

The exact definition and characterization of EPCs have been long sought after since its discovery. The most common methods in defining EPCs are (1) isolation and quantification through cell culture assays or (2) identification and enumeration by flow cytometry through fluorescence-activated cell sorting targeting numerous cell surface markers. Initially, cells that are positive for both CD34 (a hematopoietic stem cell marker) and VEGFR2 receptor (vascular endothelial growth factor receptor-2 is an endothelial protein involved in vasculogenesis) were defined as EPCs. The expression of CD34 is unexclusive to hematopoietic stem cells; it is also expressed at a lower level on mature endothelial cells. CD133 a marker for immature hematopoietic stem cells is used instead to illustrate progenitor characteristics as opposed to mature endothelial cells shedded from vascular wall. (Urbich et Dimmeler, 2004)

PBMCs are isolated down a Ficoll density gradient; these are plated into culture plates pre-coated with Fibronectin along with conditioned endothelial growth media. The standard protocol used involves three different colony forming assays to isolate three distinct groups of EPCs. (1) After 1-2 days in culture the non-adherent cells are removed and re-plated on a fresh plate also pre-coated with Fibronectin. The cells that appear after 4-9 days in culture are referred to as CFU-Hill EPCs, these cells have low proliferation rate (shown in Figure 1.a). (Hill et al, 2003) (2) The non-adherent cells are removed. After 4 days in culture there are no colony formation observed (shown in Figure 1.b.), the adherent cells are referred to as CACs. (Asahara et al., 1997) (3) Lastly, instead of fibronectin PBMCs are plated into a culture plate coated with Type I collagen. Endothelial growth media is added and regularly changed. After 7-21 days in culture, colonies resembling endothelial cells are observed and expanded the adherent colony forming cells are referred to as ECFCs. (Ingram et al, 2004)

3.b EPC characterization by flow cytometry

Flow cytometry is used to evaluate the cell surface markers expressed by EPCs; a comparison is made against markers present in mature endothelial cells and hematopoietic stem cells. Primary antibodies against human

‘true EPCs’ must also have the ability to differentiate into endothelial cells both in vitro and in vivo. 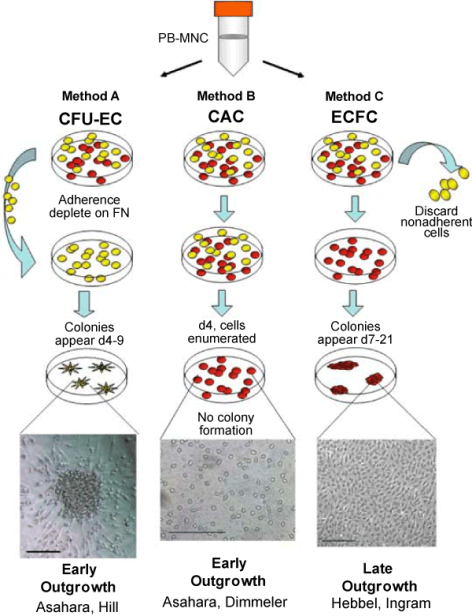 Several types of EPCs have been reported in literature by different groups. When mononuclear cells are cultured without separation two distinct populations can be observed successively from the same source. Early-outgrowth cells are similar to the cells discovered by Asahara et al in 1997. These cells are described as elongated and spindle-like, appears after 7 days in culture composing most of the peripheral blood mononuclear cells after density gradient separation. (Fuchs, 2009) Markers displayed by these cells are said to have more similarity to VEGF-treated monocytes with proangiogenic properties hence why circulating angiogenic cells (CACs) might be a more accurate terminology. (Desai et al, 2009) CACs are VEGFR2, CD31 and TIE2 positive which are known endothelial markers. (Hill et al., 2003)

In vitro, early-outgrowth EPCs express similar cell surface markers to late-outgrowth EPCs however they lack the ability to proliferate. (Prater, 2007)

Table 1. Overview of characteristics and functions adapted from Fuchs, 2009