Objective：To explore the difference of the polymorphism of RS4360791 loci of ALOX5AP gene between cerebral infarction of the Uygur and Han ethnic groups in Xinjiang Province, China.

Methods：This is a case-control study. The polymorphism of the genotype of RS4360791 loci of ALOX5AP gene and the frequency of its allele were tested using polymerase chain reaction and DNA sequencing. And the association between different genotypes and the risks of cerebral infarction of Uygur and Han ethnic groups were analyzed using Pearson chi square test and multivariate logistic regression model.

Results: There was no significant difference in the ALOX5AP gene rs4360791 between the Uygur and the Han (P>0.05).

Conclusion: In this study, the ALOX5AP gene RS4360791 polymorphisms in Xinjiang Uygur and Han nationality cerebral infarction were studied: this gene positions between cerebral infarction in Han and Uyghur The point genotype and gene frequency were not statistically significant (P>0.05).

ALOX5AP related mutation may be associated with excretion of substances like leukotriene, leading to arterial atherosclerosis formation, and subsequently vessel stenosis, and plaque rupture as well as the final the ischemic stroke caused by arterial vessel occlusion [3]. The aim of this study is to explore the relationship between the polymorphism RS4360791 loci of ALOX5AP gene and artery atherosclerosis

related stroke, investigating the difference of the polymorphism of RS4360791 loci between cerebral infarction of the Uygur and Han ethnic groups.

Patients diagnosed with cerebral infarction from September 2017 to December 2018 in the Neurology Department of Traditional Chinese Medicine Hospital of Xinjiang Uygur Autonomous region were enrolled in this study. A total number of 100 patients were included， 50 Han patients and 50 Uygur patients. Every patient underwent complete computer tomography (CT) and magnetic resonance imaging (MRI) scan and was clinically evaluated and diagnosed by at least two attending doctors. And

patients were divided into 2 groups:

Every participant was registered after signing the informed consent. Baseline demographic and clinical data including sex, age, ethic group, history of smoking, history of alcohol drinking, occupation, etc. History of smoking were defined as more than 10 cigarettes per day for at least 2 years.

For every participant enrolled, 5mL of peripheral blood using Ethylene Diamine Tetra-acetic Acid (EDTA) tube was collected at the first morning after admission when fasting, Then the blood samples were stored in a fridge of -80℃after primary centrifugation. And direct sequencing was used to verify with the Kompetitive Allele Specific (KASP) genotyping.

Comparison of baseline data between groups

First the baseline data including demographic and clinical data were analyzed between the case group and the control group. (Table 1) No statistical significance between the two groups with respect to sex, age, history of hypertension, history of diabetes mellitus and history of smoking (P>0.05) was discovered except for history of hyperlipidemia（p<0.05）.

Total DNA of the studies samples was extracted and underwent quality control. All the samples were qualified to undergo subsequent experiments. The electrophoresis of total DNA extraction is seen in Figure 1. 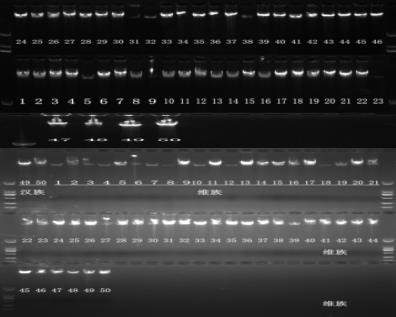 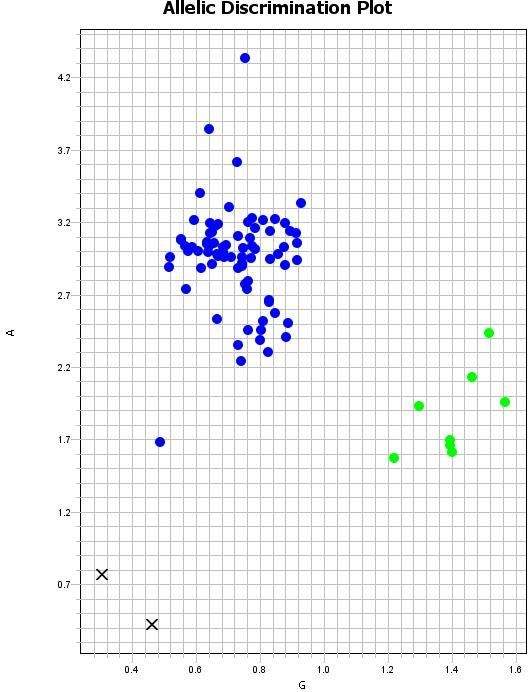 Through the sequencing of the polymorphism RS436071 loci of the case group (Uygur patients) and control group (Han patients), 3 types of genotype, GG, AG. AA were discovered. The analysis of the frequency of 3 genotypes and A/G distribution demonstrated that there was no statistical significance

The pathophysiology of artery atherosclerosis related stroke could be mainly described as a sudden decrease or blockage of supplying arterial blood flow, leading to ischemia and hypoxia of the brain tissue and the subsequently brain infarction. This pathological process was accompanied by

Previous studies have demonstrated that inflammation is the key element that contributes to the pathogenesis of atherosclerosis.

5- lipoxygenase activator protein, encoded by ALOX5AP gene, is the crucial regulator of the biosynthesis of leukotriene (LTS), leading to fat deposits in the arteries. LTS elicits white blood cell activation and monocyte adhesion into the vessel wall, which plays an important role in atherosclerosis and inflammatory disorders. ALOX5AP is strongly associated with the formation and development of atherosclerosis and plaques, the prevalence of which is further raised by ALOX5AP mutation. [6]

ALOX5AP is key to the inflammatory process, such as the production of leukotriene. [7] The bioactive products of certain loci of ALOX5AP are related to many cardiocerebrovascular diseases. [8-12] Additionally, many clinical trials of Western countries suggested that ALOX5AP took part in the pathophysiological process of atherosclerosis, resulting in ischemic strokes. And recent studies have shown some certain loci of ALOX5AP was related with atherosclerosis in Chinese population. This study adapted a case-control design where genotypes of polymorphism of RS4360791 loci of ALOX5AP and allele frequencies of 100 patients were studies using PCR and DNA sequencing and the association between different genotypes and risks of cerebral infarction was compared between Uygur and Han ethic groups. Results of this study showed that there was no significant difference between 2 groups with respect to sex, age, history of smoking, history of hypertension and history of diabetes. The only statistical difference between 2 groups was history of hyperlipidemia, which could be accounted for the different eating habits of these 2 ethic groups. The Uygur, one of the national minorities of China, are fond of meat, diary, fried food and high sugar food and fruits rather than high fiber food such as vegetables. Additionally, dinners were of great importance in their daily life. Therefore, the Uygur manifest with hyperlipidemia and high body weight index. Contrarily, the Han’s diet contains much less calorie. Therefore, this study can help control relative risk factors with statistical support.

Through the DNA sequencing of the polymorphism of RS4360791 loci of the case group (the Uygur) and the control group (the Han), 3 types of genotypes were discovered. And difference of frequency of these 3 genotypes and C/G alleles between 2 groups was further analyzed, which did not show statistical significance. This negative results could result from the limited sample size, the DNA sequencing process influenced by exterior factors and the geographical differences. Therefore, further analysis with a larger sample size or even a multicenter study is needed. And the association between the polymorphism of RS4360791 loci of ALOX5AP and ischemic stroke should be further analyzed to validate an early marker screening ischemic stroke, and to provide new insight of stroke prevention and treatment.

[3]   Spanbroek R, Gräbner R,Lötzer K, et al.Expanding expression of the 5-lipoxygenase pathway within the arterial wall during human atherogenesis[J].Proceedings of the National Academy of Sciences of the United States of America,2003,100(3):123-128.