In this case study, the livestock overseer of a property near Mansfield has reported a large number of perinatal mortalities in a flock of 600 Merino-Border Leicester-cross ewes. These ewes had been grazing on flat paddocks that had seen considerably greater pasture growth than long-term averages. As a result of these long pastures, the pregnant ewes were unable to consume the sufficient direct and indirect iodine intake from the soil and were diagnosed with an iodine deficiency disorder (IDD). The IDD was clinically expressed as goitre in the offspring of effected ewes. Enlarged, firm and dark coloured thyroid glands, alopecia, low birth weights, rounded tarsal and carpal bones as well as small or absent epiphyseal ossification centres of long bones were all reported symptoms of lambs from the iodine deficient ewes.

Part A- normal anatomy and physiology

When diagnosing an animal with a specific condition or disease, the anatomy and physiology of a normal specimen must be considered.

The thyroid gland is a butterfly-shaped structure located on the ventral surface of the trachea (Bhanugopan, 2019) and comprises under 0.04% of a healthy lamb’s total body weight (3.9-6.8 kg) (Campbell, Croser, Milne, Hodge, & Webb, 2012). The hormones produced by the thyroid gland are thyroxine (T4), triiodothyronine (T3) and calcitonin (Bhanugopan, 2019). T3 and T4 are responsible for the normal function and development of the cardiovascular, nervous, immune and reproductive systems (Choksi, Jahnke, Hilaire & Shelby, 2003) and the role of Calcitonin is to lower the concentration of calcium in the blood by inhibiting the action of osteoclasts (Martin, & Hine, 2016). However, the thyroid gland’s primary function is to regulate metabolism (Mariotti, & Beck-Peccoz, 2000).

The activity of the thyroid gland is regulated by a negative feedback system (the hypothalamic-pituitary-thyroid axis) which is illustrated in Figure 1. Thyrotropin releasing hormone (TRH) is produced by the hypothalamus and has a stimulatory effect on the production and release of thyroid-stimulating hormone (TSH) from the anterior pituitary (Choksi et al., 2003). In turn, TSH is responsible for the release of both T3 and T4 from the thyroid gland (Choksi et al., 2003). Blood concentrations of T4 and T3 above normal levels, inhibit the release of TRH and TSH, which is the basis of the hypothalamic-pituitary-thyroid (HPT) axis (Mariotti, & Beck-Peccoz, 2000). Calcitonin, T3 and T4 are responsible for various developmental and maintenance processes in the skeletal system (Bassett, & Williams, 2016). Therefore, the correct functioning of the thyroid gland and the HPT axis is essential for normal skeletal development.

Additionally, the thyroid is known to effect growth and differentiation and therefore has an effect on wool development and growth in lambs (Ferguson, Schinckel, Carter, & Clarke, 1956).

Iodine is crucial for the production of both T3 and T4 as both are iodine containing-hormones (Chung 2014). During gestation, iodine deficient ewes present lower concentrations of deiodinases in the placenta, which are responsible for metabolising maternal T3 and T4 for use by the foetus (Choksi et al., 2003). In addition, the offspring of the iodine deficient ewes would have lacked normal iodine intake from the mammary glands of the ewe once born (Clarke, 1998). These prenatal and postnatal deficiencies have caused the hypothyroidism that has been clinically expressed as goitre in the lambs.

The livestock overseer had reported enlargement of the thyroid gland in effected lambs. Hyperplasia and hypotrophy of the thyroid is known to be a compensatory mechanism to overcome decreased hormone synthesis in combination with elevated TSH synthesis (Hughes & Eastman, 2012). Sufficient enlargement can ultimately cause obstruction of the trachea and paralysis of the recurrent laryngeal nerve (Hughes & Eastman, 2012). Additionally, reduced colloid production recorded in the gross necropsy findings can be attributed to a decrease in size of follicular spaces (Figure 2), which is characteristic of iodine deficiency (Potter et al., 1980). The difference in size and shape of the follicular spaces seen in Figure 2, can also explain the ‘firmness’ of the lamb’s thyroid that had been described. 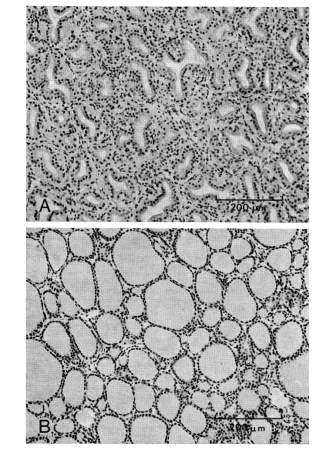 Effected lambs exhibited alopecia and poorly differentiated wool follicles and sebaceous glands. Sokkar, Soror, Ahmed, Ezzo & Hamouda (2008) found that these symptoms are due to a degeneration and lysis of the hair follicles and replacement by keratin. These changes may be a result of hormonal disturbances (Sokkar, Soror, Ahmed, Ezzo & Hamouda, 2008).

The growth of bone and cartilage and the differentiation of chondrocytes in growth plate cartilages are affected by iodine deficiencies (Basset & Williams, 2016). This is because iodine is an essential element of T4, which plays an important role in regulating bone growth and chondrocyte differentiation (Basset & Williams, 2016). These findings can explain the absence of epiphyseal ossification centres of long bones, mineralisation and abnormal structure of the cuboidal tarsal and carpal bones in effected lambs.