There is growing evidence from in vitro and in vivo laboratory animal studies that β-carotene can protect phagocytic cells from autoxidative damage, enhance T and B lymphocyte proliferative responses, stimulate effector T cell functions and enhance macrophage, cytotoxic T cell and natural killer cell tumoricidal capacities, as well as increase the production of certain interleukins. Because of their molecular composition, specifically their highly conjugated double-bond structure carotenoids such as beta-carotene and lutein serve as effective scavenger of the harmful unpaired electrons (eg. singlet oxygen, free radicals) produced by normal metabolic processes that damage body tissues (eg. via lipid peroxidation, Krinsky 1992).The cells of the immune system are particularly sensitive to oxidative stress and may benefit substantially from the free radical trapping ability of carotenoids, as the immune response itself produces reactive oxygen species that disrupt the intercellular signals sent via lipid-rich, membrane- bound receptors (Chew 1993). An enormous body of literature has accumulated over the past 20 year demonstrating the potency of carotenoids as immuno stimulants in humans and other mammals(reviewed in Hughes 2001, Krisnsky 2001).

However, within the last decade, it has also been suggested that these carotenoid derived sexual colours may signal the health and condition of males of birds and fish of the specific antioxidant and immune stimulatory activity of carotenoids obtained from the diet and transported through the body before they are incorporated into the integument (Lozano 1994, von Schantz et.al; 1999; Moller et.al 2000).

This issue continues to be debated on theoretical grounds (Hill 1999a ; Lozano2001), fueld by the idea that colorful birds and fishes obtain far more carotenoids in the diet than carotenoid deprived mammals, thus individuals may not be limited in the extent to which they can use carotenoids to boost their immune response.

Early studies demonstrating the ability of dietary carotenoids to prevent infections have left open the possibility that the action of these carotenoids may be through their prior conversion to vitamin A. Subsequent studies to demonstrare the specific action of dietary carotenoids have used carotenoids without provitamin A activity such as lutein, canthaxanthin, lycopene and astaxanthin. In fact, these non provitamin A carotenoids were as active, and at times more mediated and humoral immune response in animals and humans. Results have similarly shown immuno enhancement by non provitamin A carotenoids, based either on the relative activity or on the type of immune response affected compared to β-carotene

In the 1930s, Green and Mellanby found that infections of the ear, bladder, kidney and gut of vitamin A-deficient rats were prevented when the rats were fed with β-carotene. The level of carotene needed to prevent these infections was higher than the amount required to stimulate growth. Clauson observed that in young children with severe ear infections, improvement was seen following an increased intake of dietary carotene. These two early reports suggest that the anti-infective effect of β-carotene may be due to its pro-vitamin A activity. β-carotene may also have an independent effects on immune responses, separate from its provitamin A activity. β-carotene and other carotenoids with nine or more conjugated double bonds may enhance immune function by quenching singlet oxygen and other reactive oxygen species, including free radicals.

Experiments were performed , in which laboratory animals were either fed β-carotene or canthaxanthin to determine a carotenoid effect, separate from a provitamin A effect on T and B lymphocyte functions. Canthaxanthin has the same ability to quench singlet oxygen and free radicals as β-carotene but cannot be converted to vitamin A in mammals. Specific immune responses of laboratory animals were similarly enhanced with diets containing canthaxanthin as with diets containing β-carotene (Benedict and Shapiro 1986).

Some new investigations indicate that carotenoid can play a very important role in enhancing immune responses, which can lead to the reduction of tumor growth.

Carotenoids, besides acting through the various mechanisms described earlier, can also influence immune function through their ability to regulate membrane fluidity, and gap junctional communication. All these actions are most likely interrelated in their modulation of an immune response. Carotenoids help to maintain the membrane receptors that are essential for immune function, and they may also be found to be important in the release of immune modulatory lipid molecules such as leukotrienes. Carotenoids may increase the tumoricidal activity of the cytotoxic T cells, macrophages and or natural killer cells by any of these mechanism of action.

Carotenoid enhances many aspects of immune function which include T and B lymphocyte proliferation, induction of specific effector cells capable of killing tumor cells, and the secretion of factors required for the communication between immunologically competent cells.

The action of carotenoids on immune response hangs in a delicate balance with the intra-and extra cellular milieu, the outcome of which depends not only on the type and concentration of the carotenoid but also on the cell type and animal species involved. Even though studies to date have provided evidence for a specific action of carotenoids much has yet to be done to truly understand their molecular action.

CAROTENOID AS PRO-VITAMIN A SOURCE

Biosynthesis or conversion of carotendoids into vitamin A:

Conversion of carotenoids into vitamin A becomes complicated in fishes and aquatic animals, due to the presence of vitamin A2, which frequently predominated over vitamin A in animals living or spawning in freshwater.The presence of an unsubstituted β-ionone ring in the caroteniod molecule supports for vitamin A activity.

Both vitamin A1, and A2 can be formed in some fishes from common precurors, such as β-carotene (Morton and Creed, 1939).

Carotenoids containing at least one unsubstituted 3, 4 dehydro β-ionone ring have been shown to act as specific provitamins A2 in chicks (Budowski, et.al 1963) and mice (Budowski and Gross, 1965).According to (Budoswki, et. al 1963) the dehydration of lutein to anhydrolutein (3,4- dehydro-3-hydroxy β-carotene), a provitamin A2 might be of possible biological significance in this respect.

There are two pathways for the conversion of carotenoids to vitamin A in mammals, central cleavage and eccentric cleavage. In 1960, Glover thoughtfully discussed various pathways by which carotenoids might be converted into vitamin A. He indicated that two primary oxidative reaction might occur, one at the central 15, 15’ double bond and the other at one or more of the other double bonds. The product of the central cleavage of β-carotene would be two molecules of retinal, where as that of eccentric cleavage would be one long and one short β-apo-carotenal e.g. cyclocitral and β-apo-8’-carotenal, by the rupture of the 7’:8’ double bond.

Cyclic carotenes may be oxidized to hydroxylated and epoxide derivatives, converted to allenic and less saturated derivatives, or cleaved oxidatively to shorter products. 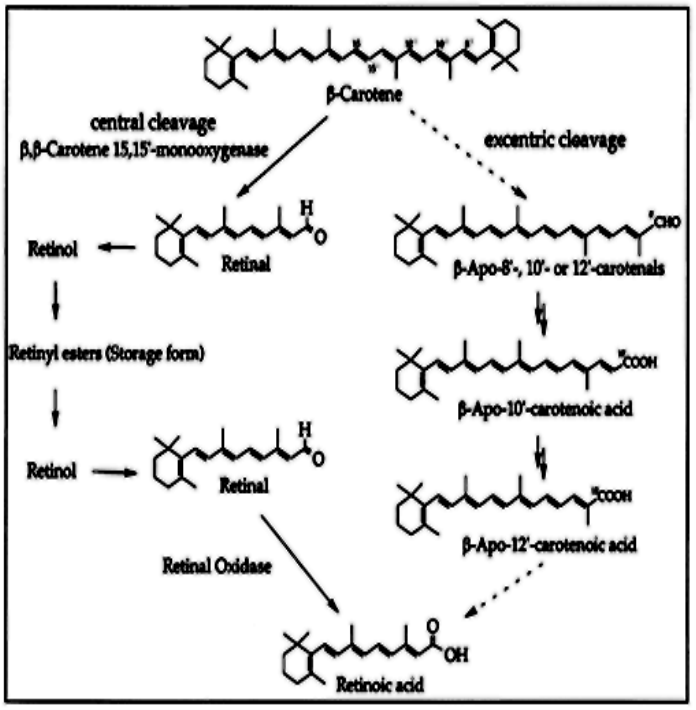 In 1965, the cytosolic enzyme preparations of the intestine and liver converted β-carotene to retinal were shown by two independent groups (Goodwin, et.al and Olson et. al 1965 ). The enzyme required molecular oxygen, yielded retinal as the sole identified product, was inhibited by ferrous-ion chelating agents and by sulfhydryl binding reagents (Olson, 1983).

The main yield of retinal formed from the β-carotene was 40-60%( Goodman and Huang, 1965) and (Olson, 1969). Since β-carotene is unstable during isolation by TLC some losses occurred as a result of both biological as well as non biological oxidation during incubation, retinal was the major, if not the sole, biological product of the reaction. The retinal formed was satisfactorily characterized by several chemical and physio-chemical procedures. The enzyme, termed β-carotenoid 15, 15’- dioxygenase was subsequently purified 20 to 70 fold from the intestines of several species and upon purification it became unstable.

β-apo-carotenals are intermediate between carotenoids and vitamin A. In conversion of β-carotene to vitamin A, an important observation was made in a recent study that individual β-apo-carotenals are formed in small but significant amounts by incubating β-carotene aerobically in the dark with shaking for an hour in the absence of an enzyme preparation. When compared, the reported rate of enzyme-catalyzed retinal formation is much higher.Despite these low yields, β-apo-carotenals might still be formed biologically from B-carotene in mammals. But in future studies, the non-biological formation of oxidation products of carotenoids must be carefully assessed and the rate of the eccentric cleavage reaction, both in vivo and in vitro, must be related to the rate of formation of retinal by central cleavage.

The metabolism of the β-apo-carotenals has been addressed primarily in terms of their conversion to vitamin A and their oxidation to β-apo-carotenoic acids. As analogous of retinal, however, they are expected to be metabolized in a similar way. Thus a significant part of them may well be reduced to β-apo-carotenols (Glover, 1960) and (Sharma et .al 1977) and subsequently esterified to β-apo carotenyl esters. Such compounds like retinyl ester and esterified lipids, should be transported primarily in the Chylomicra. 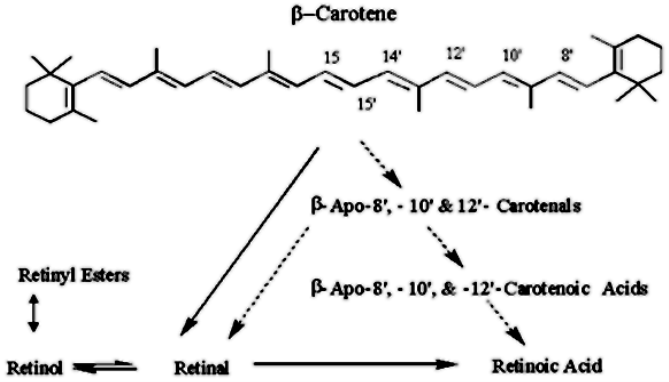 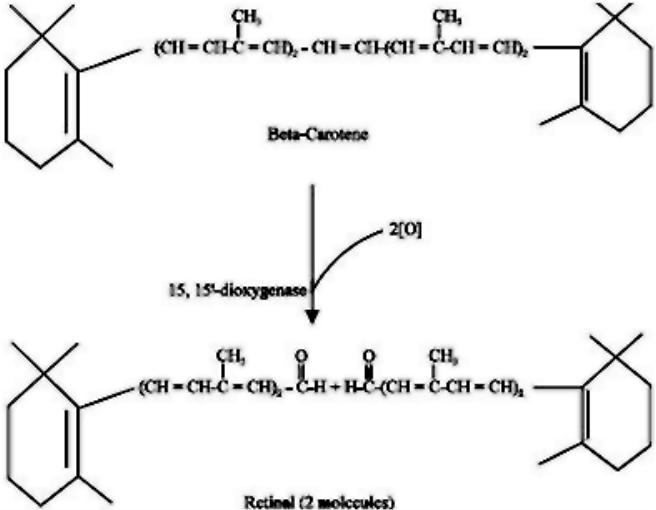 Fish are much more versatile than mammals in meeting their needs for vitamin A (Olson, 1983). Fish are able to convert astaxanthin (3,3’-dihydroxy, 4,4’-diketo-β-carotene), canthaxanthin (4,4 diketo-β-Carotene) and isozeaxanthin (4,4’-dihydroxy β-carotene) to β carotene. They can also convert anhydrolutein derived from lutein, to dehydroretinol (Goswami ;1987).

The oxidative metabolites of carotenoids work as essential molecules in a wide variety of living organisms. Carotenoids are converted to biologically active products such as abscisic acid, trisporic acid and retinoic acid in plants, fungi and animals respectively. Their formation is mediated by enzymes that catalyze cleavage reactions against specific double bonds of cartenoids. Moreover, carotenoids vulnerable to oxidation have the potential to be converted to biologically active compounds by chemical transformation. In mammals, β-carotene 15,15’-dioxygenase catalyzes conversion of β-carotene to retinal (Olson and Hayaishi, 1965) and (Goodman and Huang 1965). Although the cleavage enzyme plays a crucial role in vitamin A formation, its properties have not yet been fully revealed. The regulatory mechanism of the dioxygenase in particular remains to be clarified in terms of the nutrition of pro-vitamin A carotenoids. Dietary β-carotene solubilized in mixed micelles with bile components and hydrolyzates of dietary lipids is absorbed in intestinal cells. Retinal formed from β-carotene is further converted to retinyl ester by retinal reductase and lecithin retinol acyltransferase with the aid of cellular retinol binding protien type-II (CRBP-II), and then incorporated into chylomicron (Ong,1993). Thus, the cleavage of β-carotene in intestinal cells is closely linked to lipid and retinoid metabolism, and the regulation of the cleavage enzyme activity should be considered in this context. Moreover, the cleavage enzyme is located in the intestinal cells, which are directly exposed to various food components. Action of dietary phytochemicals on the dioxygenase activity might affect the bioavailability of provitamin A carotenoid derived from fruits and vegetables.

Carotenoids can be oxidized to a number of compounds by chemical transformation, in contrast to the specific cleavage of certain carotenoids by the enzyme, because of the high reactivity of conjugated double bonds to active oxygen species. The enzymatic conversion of β-carotene to vitamin A, the non-enzymatic cleavage of lycopene, and the biological actions of the oxidation products of lycopene are described in Akihiko Nagao”s paper.