Brown marmorated stink bug (Order Hemiptera: Family Pentatomidae) (BMSB) was accidentally introduced into the eastern U.S. from Asia in the late 1990s. In 2001  it was officially identified in Pennsylvania, and has since spread along the eastern seaboard and westward into the Great Lakes region. In 2002 it was found in Portland, Oregon, and has since spread to localized areas in Washington and California. It has not yet been found in Utah, but it is likely only a matter of time before it will occur in most states due to its rapid adaptation to a wide range of climates. Since 2004, BMSB has gained notoriety as a major nuisance due to large aggregations of the bugs invading buildings in the fall to overwinter, attracted to the protective warmth.

Biological control and insecticides are two primary control tactics under evaluation. Entomologists have explored its native range for natural enemies, and a few are under further study for potential release in the U.S. Many of the synthetic pyrethroid-type insecticides are efficacious in rapid knockdown of adults and nymphs; however, this group of insecticides has a major negative side-effect of high toxicity to many beneficial insects, mites, and spiders. Research to develop effective traps and lures is underway, with the release of a killing station pending (Alpha Scents Inc.)

BMSB has been found feeding on over 60 plant species. Crop plants which host BMSB include tree fruits and nuts such as peach, apricot, cherry, apple, pear, Asian pear, filbert, and cane and vine fruits including berries and grape. The most preferred vegetable and field crops include pepper, tomato, green bean, soybean, field and sweet com.  BMSB also feeds on ornamental plants such as butterfly bush, some rose species, honeysuckle and catalpa.

Research is underway to develop effective traps and lures for monitoring and an attract-and-kill management approach. A BMSB pheromone lure was recently released by Alpha Scents Inc., and they are close to releasing a killing station design. To date, research has shown that tall, pyramid shaped, ground-level traps colored dark brown or black rather than yellow are more attractive to BMSB. In addition, researchers found that BMSB adults frequently escape from traps, so that placing a quick knockdown insecticide device in the trap such as vaportape or a 114 piece of cattle ear tag improved trap capture.

BMSB can squeeze into narrow cracks and crevices, so seal entry points into homes and other buildings with caulking. Place and repair screens on windows,  doors and vents; and remove or seal around window air conditioner units. Mechanically remove adults congregating on exterior surfaces or within buildings with a vacuum or broom.

Evaluation of insecticide effectiveness has shown that BMSB can be more difficult to kill than other stink bug species. Insecticides were most effective when BMSB were directly contacted with the spray as compared to walking on dried residues on plant foliage (Leskey 2010). While a number of insecticides initially disabled BMSB, the effect was temporary and a high percentage of the population recovered and returned to feeding. 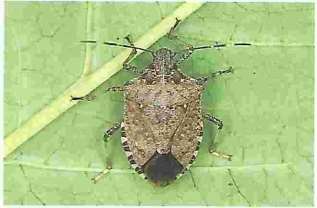 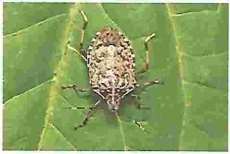