A Study of lipid peroxidation

Lipid peroxidation of rat homogenate using the Fenton reaction to generate free radicals (-OH and -O2) to initiate the self-propagating peroxidation of cell membrane fatty acids. Two separate antioxidants were used (aTocopherol and Quercetin) to study the potential of antioxidants in the prevention of cell damaged. Data of two separate groups (A+B) was provided along with data enabling the construction of a calibration curve to measure local MDA concentrations as an indication of peroxidation damage. The Fenton reaction produced the highest concentration of MDA in both data sets which is expected, allowing for a comparison of free radical damage in the presence of antioxidants. In the presence of aTocopherol, there was an MDA (nM/ml) concentration reduction from 45nM/ml to 24nM/ml evidencing a peroxidation inhibition via the binding of free radicals to the antioxidant though some damage was still caused as MDA concentration was higher than the control (7nM/ml). Quercetin showed a complete reduction in local MDA concentration from 68nM/ml to 7nM/ml, which is equal to that of the control; evidencing a complete lipid peroxidation via the binding of all free radicals produced and thus prevents cell damage.

Lipids are essential components of cell membranes (i.e. phospholipids and glycolipids) and can be used in the identification of damage as a result of the pathogenesis of disease via reactive oxygen species (ROS) concentration. ROS-dependent tissue damage can be identified by increased local MDA (malonedialdehyde) and 4-HNE (4-hydroxynonenal) (Kwiecien S, 2014). MDA is the product of lipid peroxides metabolisation, and can be indicative of oxidative stress related disease i.e. atherosclerosis, and induced gastric injury (due to gastric mucosa damage).

Due to free radicals are reactive it’s uncommon that they a found in that state as they tend to bond and react very quickly in order to fill their valence shell and become stable. The Fenton Reaction (Fe2+ and H2O2) issued to generate free radicals (particularly -OH) and initiates lipid peroxidation within the liver. During the breakdown of lipids, malonedialdehyde (the final product of lipid breakdown) reacts with thiobarbituric acid resulting in a testable pink adduct.

The Fenton reaction is as follows:

Set up a series of test tubes a labelled and the volumes laid out in Table 1 were pipetted into the corresponding tubes. Remember to add the rat homogenate last due to this starting the reaction. The tubes were then incubated for 30 minutes at 37 degrees Celsius. At this point, the standard curve of MDA was set up as seen in Table 2 and tested at a wavelength of 532nm. After which thiobarbituric acid was added to the original test tube set and incubated for a further 15 minutes in after the adduct fluid was removed and tested at 532nm.

Table 1: test tube volumes for each of the five test tubes in the lipid peroxidation assay, empty spaces indicated that the solution isn’t added to that tube. Each was incubated for 30 minutes together under the same conditions.

Table 2: The dilutions volumes of MDA and the final concentration required, these volumes were used to construct a calibration curve for comparison of the test samples in table 1.

NOTE: all data using in the results was provided, this was due to an issue in the lab were where independent data was unintentionally taken by another individual and thus leaving no results for comparison against overall class data.

MDA concentrations were provided due to an issue with both groups overall dilution series. The data from figure 1 was plotted using table 3. The R2 value (0.9986) indicates a strong linear value between the MDA concentrations (nM/ml) and the optical density. 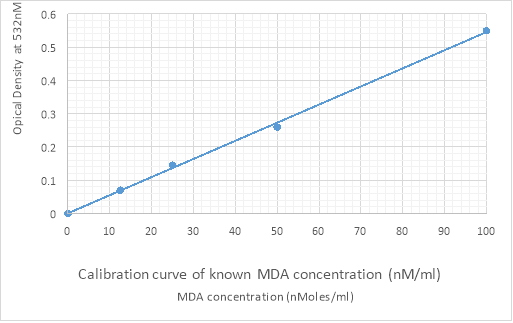 Table 4: class data group A using aTocopherol, the values were done in repeat to gain a mean value and allows for Stdev calculation and thus SEM calculation, allowing for later comparison.

The data set in Table 4 was provided and used the antioxidant aTocopherol. Seven repeats of each test were conducted to allow for a mean to be gained and thus a Stdev and then a standard error mean. The error mean allows for comparisons between different data sets as it indicates how accurate the experiment was rather than how varied (Stdev). The data was plotted in figure 2 and 3 with the variation of containing either the Stdev (figure 2) or the SEM (figure 3). Figure 2 allows for variation comparison while figure 3 allows for accuracy comparison between the two data sets (group A and Group B). 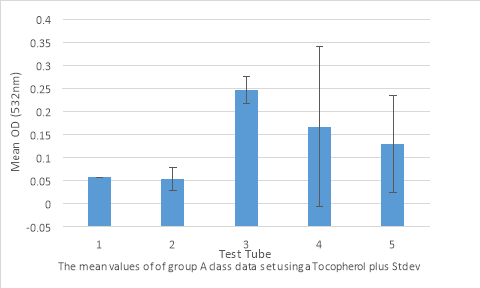 Figure 2 shows the optical density of aTocopherol. Test tube 1 contained only buffer and showed little variation between repeats resulting in a small Stdev, while test tube 4 has a large Stdev value and thus would need repeating in order to gain an accurate representation of the data. Test tube 3 was the most optically dense with a value 0.246 (at 532nm), while the OD went down between test tubes 4-5 (0.167 and 0.130). This is visually shown in in figure 3, where the data was plotted in a bar graph and SEM was used to show the accuracy of the experiment. The deviation of the error bars shows high accuracy in some results i.e. test tube 1-2-3. However, the deviation in test tubes 4-5 was high compared to other samples. 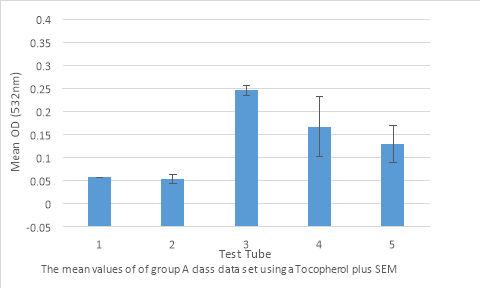 Figure 3: the graph shows the class data of group A. The mean OD values of aTocopherol were plotted including the SEM to show how accurate the experiment was between data sets. Test tube 3 showed to be the most optically dense of the set while test tube 2 showed to be the least.

Table 5: a table showing the MDA concentrations of Group A class data set of each test tube using the calibration curve in Figure 1. 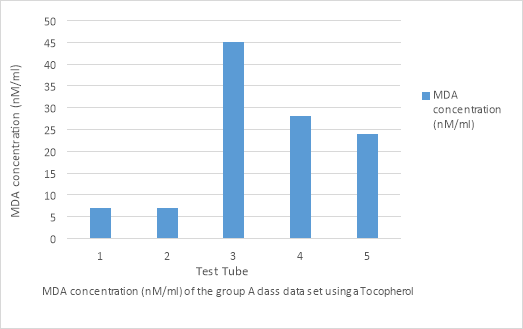 Table 6: The table shows the class data set of group B using Quercetin as an antioxidant, multiple repeats were undertaken to allow for an average to be gained and Stdev and SEM to be calculated. The control only contained buffer solution. 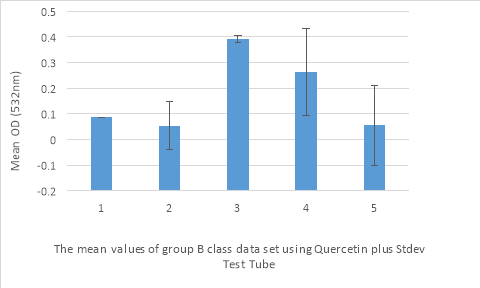 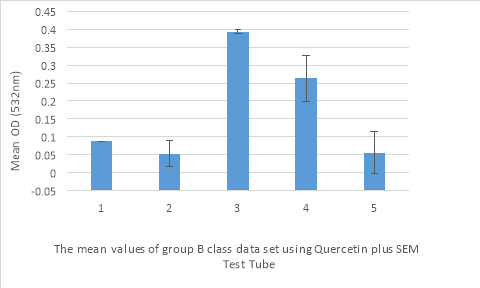 Figure 6: The graph shows the mean OD of the group B class data set, using quercetin as an antioxidant. SEM values were used as error bars to visualise the variation between the dataset. Test tube 3 showed to be the most optically dense while test tube 2 showed to be the least though showed high SEM and thus low accuracy between the individual repeats.

Table 7: a table showing the MDA concentrations (nM/ml) of Group b class data set of each test tube using the calibration curve in Figure 1. 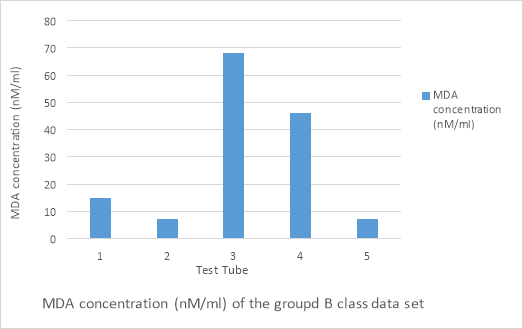 NOTE: Due to individual data being lost only a comparison between the two data class data set can be made

The enzymatic destruction (via catalase, superoxide dismutase) of membrane lipids is a crucial step in the pathogenesis of multiple disease states within adult (Mylonas C, 1999), the reactive oxygen species (hydrogen peroxide) produced during lipid peroxidation readily attacks the polyunsaturated fatty acids within the phospholipid bilayer causing the commencement of a self-propagating chain reaction within the membrane due to CH radicals reacting with O2 radicals producing peroxyl radicals (AW, 1998). Due to the self-propagating nature of the reaction series small lipid peroxidation can cause serious tissue damage resulting in atherosclerosis, asthma or kidney disease.

Antioxidant activity quenches molecular oxygen (Yamauchi, 2010), and helps in the stabilisation of lipid-peroxyl free radicals via inhibition. Quercetin, a plant-derived aglycone flavonoid (Zhang M, 2011) was compared to aTocopherol (vitamin E) in the lipid peroxidation of rat liver homogenate. The liver metabolises materials and thus results in the production of free radicals when the oxidative balance is lost it leads to oxidative stress and thus having antioxidants to restore homoeostasis is required. Antioxidants have a high affinity for free radicals (Muriel, 2015) due to their ability to donate electrons.

The antioxidant a-Tocopherol reduces oxidation under strong oxidative conditions, reducing the number of free radicals to be ‘free’ at the end of lipid peroxidation. The data in figure 2 shows the average OD including Stdev bars, the variation in tubes 4-5 indicates poor experimental practice resulting in poor repeats within the data set and thus increasing variation within the data set. It suggests high oxidative conditions in tube 3 producing high concentrations of MDA (nM/ml) as seen in figure 4. Figure 4 also evidences that in the presence of a-Tocopherol lipid peroxidation is reduced as a reduction of MDA (the final product of lipid peroxidation and would result in pink adduct) is being produced suggest an interruption in the self-probating cycle of the fatty acids within the liver homogenate. This reduction is evidence as MDA concentration goes from a peak of 45nM/ml to an MDA reduction 24nM/ml in the presence of a-Tocopherol.

When comparing the two sets of Data SEM and SD is used in order to give a relative comparison between the two different groups due to them being undertaken under different conditions. Comparing figure 2 and figure 5 (which used SD) the variation in data set A was much more significant as the higher SD values indicating a large variation within the repeats evidencing low reliability. Figure 5’s SD bars a smaller then figure 2 indicating less variation and an increased reliability of the obtain results. Though both sets of data (A-B) show that the highest OD was found to be within tube 3 indicating that Fe2+ and H2O2 produce the highest concentration of MDA (nM/ml).

SEM of the two data sets show that the accuracy of the two groups are similar and both show a decline in MDA concentration in the presence of the antioxidant, evidencing a reduction in lipid peroxidation (MDA is the product of lipid peroxides metabolisation which results in the pink adduct) and free radical production in the presence of the chosen antioxidants.

Improvements that can be made include, not losing the individual samples which would have been used for comparison, increasing the amount of antioxidants used to show and overall reduction in free radicals in different antioxidants. Also individual human error resulted in data sets begin provided requiring more lab expertise would reduce this and thus reduce was and cost of the experiment.

Antioxidants reduce the concentration of MDA (nM/ml) present in the test tube via the inhibition of oxidative stress and lipid peroxidation of the cell membrane lipids. Quercetin completely reduced local MDA concentration of the rat homogenate indication no lipid peroxidation was occurring due to the binding of antioxidant to the local free radicals (produced via the Fenton reaction) due to their naturally high affinity. There was also a noticeable reduction of MDA concentration in the presence of aTocopherol though this was only an estimated 50% reduction. It can be seen that antioxidants offer a level of cell lipid protection against free radicals and a reduction in oxidative stress, resulting in less overall tissue damage.