Excessive usage of traditional energy reserves leading to increased environmental pollution and global warming have strongly urged for alternative sustainable energy source. Due to non-polluting nature and high energy yields, H2 gas is considered as an ideal candidate for alternative fuel. Microbe-assisted H2 production from bioconversion of organic wastes is a cost-effective and sustainable approach, addressing energy production through organic waste disposal. Organic wastes such as lignocellulosic biomass and industrial glycerol, a by-product of biodiesel manufacturing process, have been recently investigated for their bioconversion potential. However, bioconversion of such organic wastes is a challenge due to the presence of impurities, toxic degradation products and complex nature. In comparison to pure bacterial strains, natural microflora could be an ideal inoculum choice offering better substrate utilization efficiency and bioconversion rates. Another challenge to ensure efficient fermentation is to optimize physico-chemical factors such as pH, temperature, substrate concentration, H2 partial pressure and media nutrients and supplements due to individual and interactive effects on microbial growth, metabolism and hydrogenase enzyme.

Hydrogenases are metalloenzymes that reversibly catalyzes proton reduction to H2, and are divided into three classes based on the metal cofactor at the active site, [Fe-Fe], [Ni-Fe] and [Fe] hydrogenase. Among the hydrogenase classes, [Fe-Fe] hydrogenases exhibit highest catalytic activity involving mostly in H2 production. Apart from their pivotal role in fermentative H2 production, [Fe-Fe] hydrogenases promise an alternative catalyst choice in fuel cells. However, in spite of their preference towards hydrogen production, [Fe-Fe] hydrogenases are extremely prone to catalytic inactivation upon oxygen exposure. This is the major challenge, at the protein level, that hinders a cost-effective approach for biotechnological applications and suggests the requirement of targeted tools to investigate the inactivation process at the molecular level.

The purpose of the present study was to investigate bioH2 production in protein to community level perspective. More specifically the aims were (1) to establish anaerobic biopanning procedure to enrich molecular binders’ specific against Clostridial [Fe-Fe] hydrogenase protein, (2) to develop and standardize a novel enrichment system and implement the technique to enrich functional inoculum capable of degrading complex substrates, (3) to enrich crude glycerol fermenting microbial community and finally, (4) to optimize the physico-chemical factors influencing fermentative H2 production for efficient bioprocess.

The study progresses in investigating bioH2 production in perspective of microbial community. The novel microbial enrichment system was developed and the proof-of-principle experiments conducted using an artificial mixed microbial community and varied selection criteria allowed the enrichment of the best H2 producer from the microbial consortium. The system was implemented in enriching cellobiose degrading H2 producer from an environmental sample. The bacterial strain isolated by spread plate technique on agar plates containing CMC was affiliated with Citrobacter sp. and named as Citrobacter sp. CMC-1. Citrobacter sp. CMC-1 utilized glucose, cellobiose and CMC and followed mixed-acid fermentation profile producing H2 and CO2 as gaseous metabolites and acetate, formate, lactate and ethanol as liquid metabolites. Optimized values of cultivation conditions such as pH and cultivation temperature were observed to be 6.0 and 34 ËšC, respectively. Except for arabinose, the isolate efficiently fermented monomeric hemi-cellulose sugars to H2. An increase in cultivation period improved the biomass and H2 yield followed with observations of reduced formate accumulation in the medium, indicating that Citrobacter sp. CMC-1 produced H2 from formate breakdown via the FHL complex.

Microbial community, pre-dominated with Clostridial sp., enriched from activated sludge fermented crude glycerol mainly to H2, CO2, acetate, butyrate and ethanol. Optimal bioprocess conditions for the enriched inoculum were experimentally observed to be pH 6.5, 40 ËšC and 1 g/L crude glycerol. At high crude glycerol concentrations, substrate utilization and H2 production were limited due to the presence of impurities in the crude glycerol fraction. Incomplete substrate utilization was observed even at increased cultivation periods suggesting the utilization of non-glycerol organic matter in the crude glycerol. The bioconversion of crude glycerol to H2 was further improved by statistical optimization of the cultivation media components. Initial screening with Plackett – Burman design identified NH4Cl, K2HPO4 and KH2PO4 with individual and interactive effects on H2 yield. Among the three identified media components, NH4Cl and KH2PO4 imparted the maximal significance and were optimized in scrutiny. A series of statistical models and central composite face centered design together with response surface methodology identified the optimal media composition for improved hydrogen yield from crude glycerol fermentation. The optimization experiments were successful in improving the hydrogen yield by 29%.

Since current H2 production methods are expensive and non-sustainable, biological hydrogen production offers a sustainable alternative. Thus intensive research has been concentrated in the field of biological hydrogen production. Investigations on biohydrogen production have been reported for both pure strains and mixed microbial community. Kleerebezem and Loosdrecht (2007) reported the importance of ‘Mixed culture Biotechnology’ in the field of biotechnology and bioprocess technology (Kleerebezem, van Loosdrecht 2007). Diversity of microbial consortia in natural samples helps in the complete degradation of organic substrates or biowastes and

Green algae and cyanobacteria are able to produce H2 from water, either by direct or indirect biophotolysis (Figure 1.2). In direct biophotolysis, the light energy absorbed by photosystem II (PSII) and photosystem I (PSI) assists in electron transport from water to ferredoxin. The reduced ferredoxin is re-oxidized by transferring the electrons to hydrogenases and/or nitrogenases. (For reviews, (Eroglu, Melis 2011, BiÄáková, Straka 2012) Though direct biophotolysis relies on inexpensive substrate and studies on this technology have reported high energy conversion efficiencies (Melis 2009), one major limitation is the presence of oxygen produced from PSII mediated water oxidation which irreversibly inactivates both hydrogenase and nitrogenase. Melis et al (2007) have studied the effect of sulfur deprivation on reducing oxygen production by PSII and improving H2 production in Chlamydomonas reinharditii (Melis 2007). The authors report a decreased PSII activity under sulfur limiting conditions thereby lowering the possibility of oxygen mediated hydrogenase inactivation. This drawback led to immense attention towards indirect biophotolysis, wherein the nitrogenase is present in heterocysts. 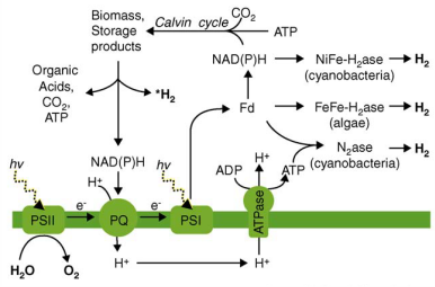 Figure 1.2. A schematic representation of direct and indirect biophotolysis. Figure from (McKinlay, Harwood 2010) 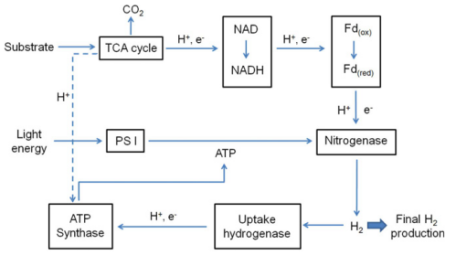 Dark fermentation, conversion of organic substrates to bioH2 in absence of light, is achieved by obligate or facultative anaerobes under anaerobic conditions and is associated with the action of hydrogenases. Dark fermentation is considered as a practical route towards biological hydrogen production due to high H2 production rate (Levin, Pitt & Love 2004b)(Wu et al. 2006), simple bioreactor set-up and ability for bioconversion of organic wastes (Chong et al. 2009a), thus addressing both energy production and waste disposal issues.

When compared with formate degradation, breakdown of acetyl-CoA produces increased H2 production. Acetyl-CoA degradation follows two routes either towards acetate or butyrate production. Theoretically, acetate production route yields 4 moles H2 per consumed glucose and 2 moles of H2 are produced with butyrate as the main end-metabolite. The additional H2 formed with acetate production is catalyzed by the reduction of ferredoxin and proton transfer to hydrogenase through electrons donated from oxidation of NADH to NAD+. The electron transfer is thermodynamically favorable during low H2 partial pressure conditions. In the case that butyrate is the final product; the electrons are required for conversion of acetoacetyl-CoA to butyrate. (Ntaikou I, Antonopoulou G, Lyberatos G 2010) 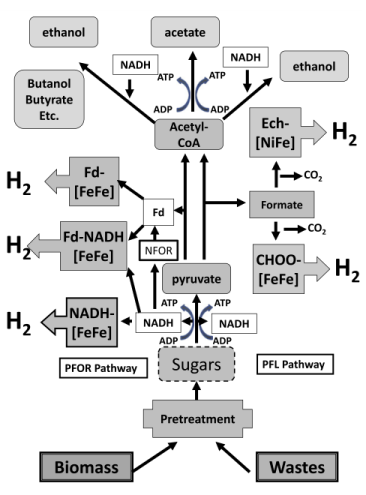 Figure 1.4. Biological H2 production routes through dark fermentation. In Enterobacteriaceae, pyruvate is converted to acetyl-CoA and formate, which is degraded to hydrogen by FHL together with [Ni-Fe] hydrogenase or by formate-dependant hydrogenase. Pyruvate breakdown via PFOR pathway produces acetyl-CoA and reduced ferredoxin. Electron transfer between reduced ferredoxin and [FeFe] hydrogenase results in evolution of molecular hydrogen. During low H2 partial pressure, NADH mediated ferredoxin reduction assists in production of additional H2 via NFOR or acts as a co-substrate with ferredoxin (red) to produce H2 from NADH-dependent [Fe-Fe] hydrogenase. Figure from (Hallenbeck, Abo-Hashesh & Ghosh 2012)

Hybrid fermentation is a promising technique for efficient H2 production as the method solves the negative effect of metabolic end products from dark fermentation and problem of electron donors in photo fermentation. Moreover, in theory, 12 moles of H2 can be produced from 1 mole of glucose through hybrid fermentation. (BiÄáková, Straka 2012)(Tekucheva, Tsygankov 2012)

The initial step in this combined approach, involves bioconversion of sugars and organic wastes to H2 and organic end products. These liquid end products are then converted to H2 by photosynthetic bacteria. (Figure 1.5) Yokoi et al (2002) have reported a H2 yield of 7.2 mol / mol hexose with Clostridium butyricum, Enterobacter aerogenes HO-39 (dark fermentation) and Rhodobacter spp. M-19 (photo fermentation) and sweet potato starch residue as the carbon source (Yokoi et al. 2002). Sucrose fermentation by Clostridium pasteurianum CH4 and Rhodobacter palustris WP3-5 resulted in a H2 yield of 10.1 mol/mol hexose with 72.0% COD removal (Chen et al. 2008). Another approach in hybrid fermentation is the usage phototrophic accumulation of polysaccharides in microalgal biomass as the substrate for the two-stage fermentation. Kawaguchi et al (2002) investigated the effect of starch in Dunaliella tertiolecta biomass as the carbon source for hybrid fermentation involving Lactobacillus amylovorus and Rhodobium marinum A-501 (Kawaguchi et al. 2001). The authors reported a H2 yield of 8.3 mol/mol hexose. Though feasible, factors such as concentration of nitrogenous components, presence of end-metabolites and availability of the organic substrates are important factors that required careful optimization (Tekucheva, Tsygankov 2012).